From Pot to Pirates, Meet the Parties That Definitely Won’t Win Israel’s Election 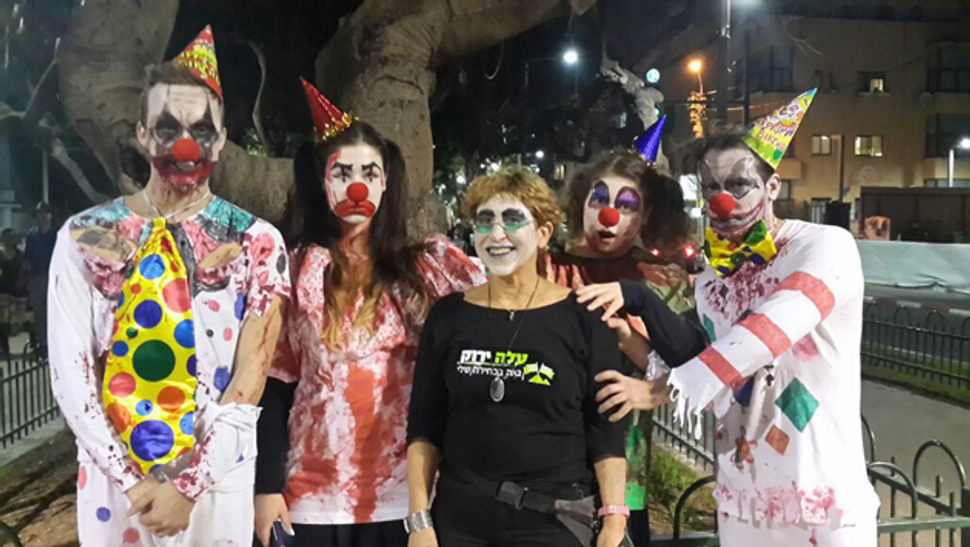 This year, Israel’s pro-marijuana party, Green Leaf, struck a self-aware tone in its appeal to voters: “Of course it is not the most important thing,” the party’s campaign slogan calling for pot legalization read. “But it is very important.”

In an election dominated by security and economic issues, that dictum might sum up the sales pitch for all of Israel’s 14 tiny parties — many of them niche in focus — running in the 2015 election. As the Forward goes to press, Likud and the Zionist Union are duking it out for the Israeli premiership. And Israel’s nine midsized parties are vying furiously for Knesset representation. But further down the pecking order, Israel’s electoral playing field is even more crowded — and more colorful.

The ballot’s 14 smallest parties range in focus from Haredi female empowerment to the separation of synagogue and state. But they all have one thing in common: They don’t have a prayer of making it into the Knesset.

That’s especially true this year, as the threshold for Knesset entry was bumped up to 3.25% of votes cast, or about four seats, from 2%. The new regulation poses a serious challenge for smaller mainstream parties that currently have members in the Knesset — in particular, dovish Meretz and hard-line Yisrael Beiteinu. Yachad, a new ultra right-wing party formed by ex-Shas member Eli Yishai, might also come up short. But for many of the smallest parties, running a campaign is less about winning than about raising their issues, however idiosyncratic, with the Israeli public.

Sometimes voters even listen. In 2006, to general astonishment, the retirees’ Pensioners Party earned seven seats in the vote, largely through the tongue-in-cheek support of young Tel Avivians.

In the last election in 2013, about 7% of the votes went to small parties below the threshold, said Abraham Diskin, a political scientist at The Hebrew University of Jerusalem. This year, he expects it will be even less because the new threshold will motivate voters to support larger groups. “Most of the voters do it for fun, or for an expression of protest,” he said “People don’t really expect them to win.”

Unlike the other niche parties, Green Leaf has a genuine following among the Israeli public. Founded in 1999, the party has run six times and garnered some 50,000 votes in the last election, party spokesman Eldad Maron said. The group just raised a quarter-million shekels (about $62,000), he said, by promising donors a free gram of weed if the drug is legalized in Israel.

Though Maron said he is “not delusional” about the group’s prospects for this election, he believes that the raised voter threshold will be a boon to the party in the long run by giving it more power in the Knesset when it does get in. The party’s first act upon joining a coalition, he said, would be to do away with criminal charges for marijuana possession. “It is not scientific,” he said, “but according to the vibe on the street, it seems to be going well for us.”

“They always participate in the elections, and the strange phenomenon is that they do have not insignificant support among youngsters,” Diskin said. “For instance, in the military ballot box they do overcome the threshold.” Green Leaf’s name recognition in Israel sets it apart from other small parties, which vie to make an impression despite Israel’s difficult election rules. Registering as a political party in Israel requires tens of thousands of shekels and 100 supporter signatures. According to Diskin, new party platforms are published in Israeli newspapers, and voters are allowed to object to a party’s published premise. (He said it’s never happened.)

Once a group is registered for the election, it receives 15 minutes of free radio time and seven minutes of free TV time, by law, during the two weeks preceding the election. This is where big parties have an advantage: If a group is already represented in the Knesset, it receives an extra four minutes of radio time per Knesset member and an extra two minutes of TV time per Knesset member over the two-week period. That constitutes a huge advantage for large parties such as Likud and Yesh Atid, currently the two largest, with 18 seats and 19 seats, respectively. The ads during this period are widely watched. 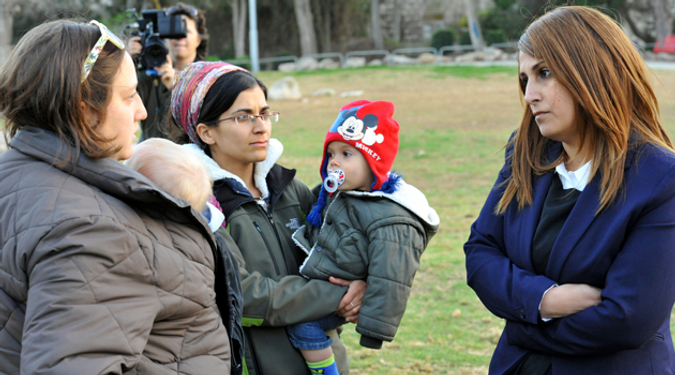 For a new party focused on Haredi women, there was an additional challenge: Ultra-Orthodox newspapers did not allow the group to buy advertisements, party spokeswoman Hayah Eichler said. Yet the party, called Haredi Women Making Change, has received plenty of publicity in the mainstream Israeli and American press.

Founded by Orthodox activist Ruth Colian, the group is an answer to Haredi parties like Shas and United Torah Judaism, which ban women from running on their lists. Haredi Women Making Change is running on education, on fair divorce for Orthodox women and on fighting the disappearance of female images from the Haredi public sphere and beyond. Like all small parties, the group is not included in mainstream Israeli polls, leaving Eichler only to guess how her party will fare in the election.

“Haredi women do vote, but they are not usually polled and we don’t know what’s going to happen this time,” she said. “This is the first time they have an alternative where they can go behind a screen and say: ‘We are also finished waiting. We are going to vote for the Haredi women’s party.’”

Another religious party is Na Nach We Are All Friends, run by followers of the 18th-century Ukrainian Rabbi Nachman of Breslov. In Israel, the Na Nachs are famous for blasting Hasidic pop music from their vans and for staging impromptu dance parties on the street to spread the joyous teachings of Nachman. “Will the growth of the party mean that everyone will dance in the streets? Maybe, maybe,” said Nitzan Kapel, secretary of the party.

Kapel conceded that many Na Nachs aren’t in favor of bringing the movement into the political sphere. The party also has its fair share of internal strife. In order to follow Nachman’s teachings about modesty, the group has decided that candidates must never express the desire to lead. Instead, others must appoint them to the party list. But those who are appointed often refuse the nomination. “Nobody wants to be in the first place,” Kapel said. 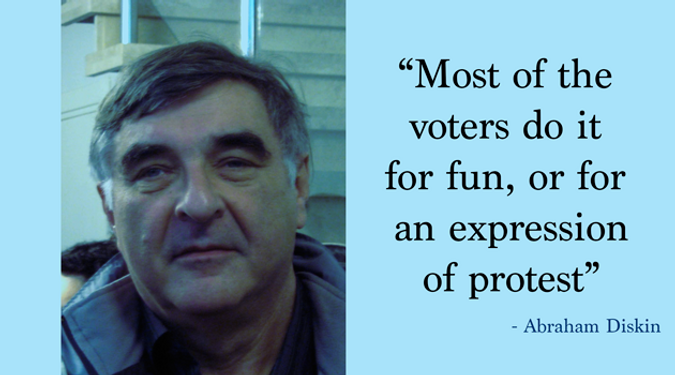 In addition to spreading Nachman’s Jewish teachings, the party is campaigning on earthly concerns. It opposes a two-state solution to the Israeli-Palestinian conflict and also same-sex marriage. “The country that has laws that two men can marry each other, it is like a country with holes in the ground, and people fall through the holes,” Kapel said.

Israel’s small parties also include Arab representation. Hope for Change is one of two Arab parties challenging the new United Arab List, which is likely to make a major showing in the election.

Hope for Change party spokesman Mahmoud Nujedad, a geography teacher from Tiberias, said that the United Arab List is overly focused on the Israeli-Palestinian conflict. His party will shift the lens to the problems facing Arab citizens of Israel, such as housing, education and land. (These are also stated priorities of the United Arab List itself.) “When you speak with me about Palestinian problems, I say, ‘What can we do for them?’ We hope it will be solved, but we don’t have any ways to help them,” he said.

Other parties are focused on social issues facing Israelis. The Finance Party, founded by two Israeli-American brothers, aims to tackle Israeli bureaucracy. One of its proposals is to require Israeli companies to pay their employees twice monthly instead of monthly, to help them avoid overdraft fees at the bank. “We’re taking the best ideas around the world and we want to implement them in Israel,” said Danny Goldstein, who launched the party two and a half years ago with Benny Goldstein, his brother.

Danny Goldstein, who speaks with a thick New York accent, moved to Israel as a 7-year-old but left as an adult when he became fed up with Israeli red tape. He now splits his time between Israel and Long Island, New York. His brother was born in Israel and lives there.

Danny Goldstein said that eight out of 10 Israelis have heard of the Finance Party. But in the 2013 election, he said, only 2,000 people voted for it. “Rome wasn’t built overnight,” he said.

Another group, called the Social Leadership party, is built on the notion of people power. The group is so focused on Israeli society that it is party policy not to speak in English about the platform. The Light Party, meanwhile, focuses on the separation between state and religion and calls for all Israeli citizens — Haredi Jews and Arabs included — to attend the same schools and serve in the military. Then there’s Renting with Dignity party and the party with the longest name on the ballot, which roughly translates to: Blossom — Many Wishes, Life and Peace — the Revolution in Education, Housing and Honorable Peace. (A phone call to a number affiliated with the party was not returned.)

Finally, there is the Pirate Party. Built by defectors from Green Leaf, the party is so named because of its affiliation with Pirate Parties International, a Belgian not-for-profit organization with representatives from 42 countries that advocate for civil rights, direct democracy and open sharing of information.

Israel’s Pirate Party is actually based in New York State, where party chief Ohad Shem Tov is completing a doctorate at Binghamton University. He said that he sees no problem with running for office outside Israel, and in fact, he says it emphasizes the group’s point that the country is simply unlivable for young, educated Israelis who want a life free of economic strife, corruption and war. “I’m not taking part in this craziness of Israel anymore,” he said. “We have had enough.”

Shem Tov said that if Pirate does poorly in the elections, it will only confirm his sense that Israeli society has gone off the rails. “We have almost no hope that the people in Israel will vote for us,” he said. “We think that for many reasons they are being manipulated by the system to keep having more of the same.”

From Pot to Pirates, Meet the Parties That Definitely Won’t Win Israel’s Election