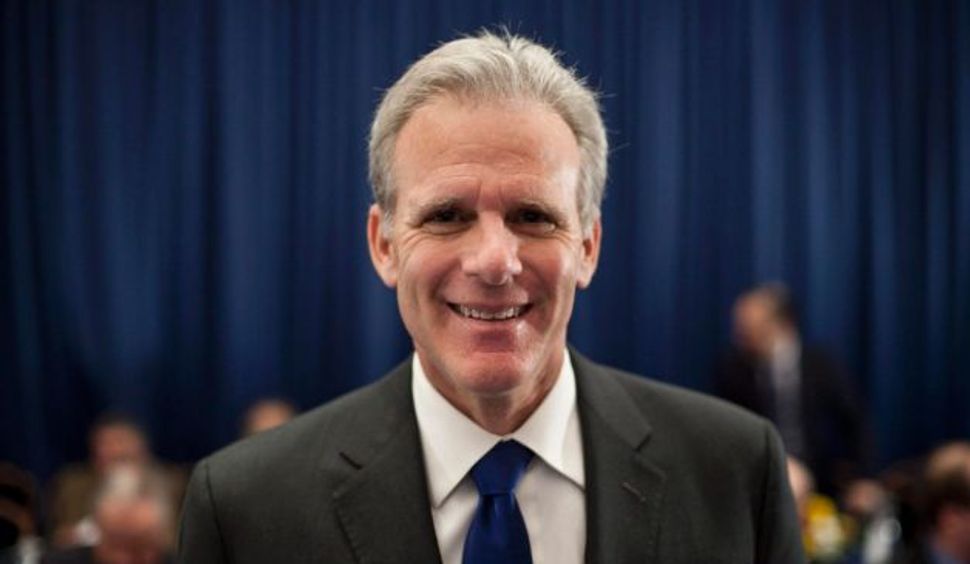 From writing history books on the U.S. role in the Middle East to serving as Israel’s ambassador in Washington, Michael Oren seems to have spent most of his life building bridges between the Jewish state and his country of birth.

Oren, No. 4 on the slate of Moshe Kahlon’s Kulanu and the only member of the incoming Knesset who was born in the United States, has been a key figure in drafting his party’s foreign policy. If Kulanu joins the new coalition, Oren could be a valuable asset for the government’s foreign policy team at a time when Israel must mend its frayed ties with the United States.

Contacted by Haaretz on Thursday, Oren said he was “proud” of Kulanu’s election results and of having been elected to the Knesset. He would not comment on the coalition talks but said he would be happy to contribute his foreign policy experience and knowledge, particularly in “not just mending but improving our relationship with the United States.” He said Israel must reach out more to U.S. Democrats to shore up bipartisan support for the country in the wake of the tensions caused by Netanyahu’s speech to Congress this month.

Born Michael Bornstein in 1955 to a Conservative family in upstate New York and raised in New Jersey, Oren fell in love with Israel after his first visit, at age 15, when he was a kibbutz volunteer.

He earned a Bachelor’s degrees from Columbia University in 1977 and completed a Master’s in international affairs the following year. In 1977 he competed in the Maccabiah Games, winning two gold medals and one silver in rowing. In an interview with Haaretz in 2009, Oren said he chose the demanding sport because he thought it would best prepare him for service in the Israel Defense Forces.

After immigrating to Israel in 1979, he joined the Paratroopers Brigade and became an officer. He married the former Sally Edelstein, an American Jew from San Francisco who immigrated to Israel in 1981. They have three children.

The day after their wedding, in summer 1982, he returned to Lebanon to be with his unit in what came to be known as the first Lebanon war. He was among the first Israeli forces to enter Beirut. His next decades were equally adventurous: He worked with the Zionist underground in the Soviet Union, served as IDF liaison officer to the U.S. Sixth Fleet during the 1990-91 Gulf War and in the IDF Spokesman’s Office during the 2006 Second Lebanon War and the 2008-09 Operation Cast Lead, in the Gaza Strip. As a reservist, he participated in the 2005 evacuation of settlers during the Gaza disengagement, which he supported but called “the most traumatic” event of his military career.

In between, he was awarded a doctorate from Princeton University and he launched a successful academic career.

He became a fellow at the Shalem Center, a conservative think tank in Jerusalem, and he has also taught at Harvard, Yale and Georgetown universities.

It was as a historian that Oren first rose to international prominence, thanks mainly to his best-selling and widely praised books.

For his 2002 work on the Six-Day War, he used newly discovered documents and testimonies to put together what some critics considered the definitive account of that conflict.

In 2007 he published a best-selling study on the history of U.S. involvement in the Middle East. Two years later, the silver-haired, broad-shouldered historian received a chance to witness firsthand the continuation of that story, after Prime Minister Benjamin Netanyahu appointed him to serve as Israel’s ambassador to Washington. He relinquished his U.S. citizenship in order to take the post, in accordance with Israeli law.

During his ambassadorship Oren had to manage the deteriorating relationship between Netanyahu and U.S. President Barack Obama, particularly their disagreements over continued Israeli construction in West Bank settlements and how to address Iran’s nuclear program.

In an interview with the Atlantic’s Jeffrey Goldberg on the eve of Tuesday’s election, Oren said he worked to balance the deep polarization in U.S. politics and to retain bipartisan support for Israel, something he feels was endangered by Netanyahu’s controversial speech to Congress earlier this month.

He added that many Israelis don’t understand that the United States is changing, and groups that once had no or little power are gaining influence.

As ambassador, Oren tried to reach out to groups that are traditionally ignored by Israeli lobbying efforts, including African Americans, Irish Americans and Latinos. He also reached out to Muslims, for example by holding the Israeli embassy’s first-ever Iftar dinner, the meal that breaks the daily Ramadan fast, at his home in Washington.

But Oren also faced increasing opposition to Israeli policies, particularly on university campuses at which he often spoke to defend the Jewish state. He was also criticized by some Jewish leaders and left-leaning Israelis who opposed Oren’s boycott of J Street, the liberal lobby founded in 2008 to promote a solution to the Israeli-Palestinian conflict.

After Netanyahu replaced Oren with close advisor Ron Dermer in Washington, the historian-turned-diplomat underwent yet another transformation, joining Kahlon’s party.

“All my life I have been involved in contributing to Israel one way or the other,” Oren told Haaretz in an interview last month. “When I was in Washington I was really doing politics at a very, very high level, so when I came back and I was looking at how I would continue to contribute, politics was a very obvious answer for me.”

After Kulanu won 10 Knesset seats in Tuesday’s election, Kahlon could be the kingmaker of the upcoming coalition talks, if he decides to join Netanyahu. While his party is more focused on socioeconomic policies, with Kahlon gunning for the post of finance minister, Kulanu will also have to come to some understanding on foreign policy with Netanyahu, particularly after the premier’s last-minute pledge to prevent the creation of a Palestinian state and increase construction in the settlements.

Oren has criticized Netanyahu’s insistence on addressing a joint session of Congress on March despite White House opposition, calling it “created the impression of a cynical political move,” and his views on the Palestinian conflict seem to diverge from Netanyahu’s. Oren concurs that the current Palestinian leadership cannot be a partner for peace, but in outlining Kulanu’s foreign-policy platform to Haaretz he said Israel should take more unilateral measure to strengthen de facto Palestinian sovereignty and to prepare the ground for a future agreement.

In order to improve relations with Washington, Oren said, Israel should limit construction in the West Bank to areas the administration has recognized will remain in Israel under a final peace deal, the major settlement blocs.

He added that Israel must do more to demonstrate its willingness to end its presence in the territories and to reach a two state-solution, if the Palestinians prove willing to negotiate and to make the concessions necessary to reach an agreement.

“We must always keep the door open to negotiations,” he said. “The fact that there is no Palestinian partner right now doesn’t mean that there won’t be in two years or two weeks, we don’t know, but we should always say ‘we are at the table and ready to negotiate.’”