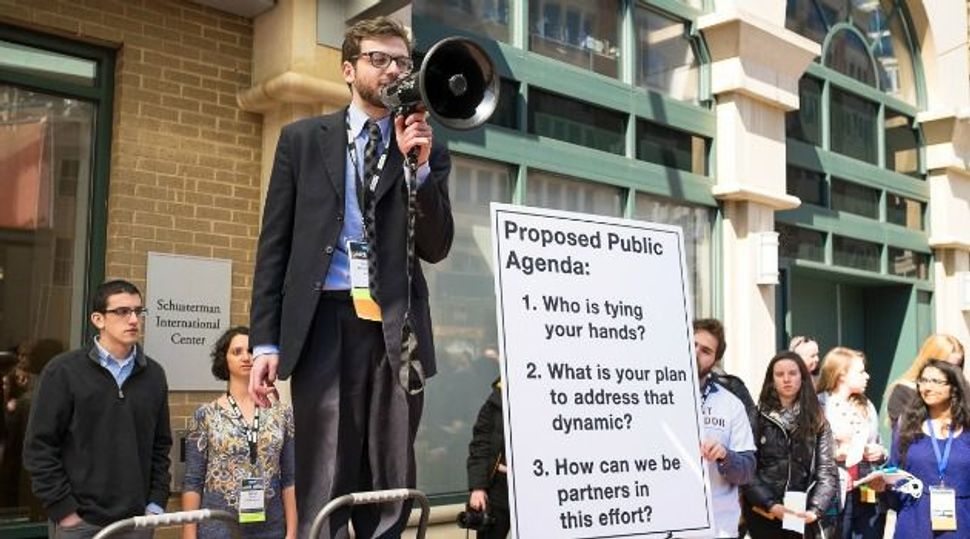 Speaking Their Peace: On the third day of the conference, hundreds of J Street student supporters, led by Benjy Cannon, marched in protest to the headquarters of Hillel International. Image by moshe zusman

J Street, the dovish Israel lobby, crossed the Rubicon in March, effectively defining itself as an outright opponent of the Jewish establishment rather than as its dissenting adjunct.

The fateful step, taken after years of wavering, came at the group’s national conference in Washington, marking an end to J Street’s earlier efforts to fight for its place in the Jewish communal mainstream.

The decisive victory of Prime Minister Benjamin Netanyahu in Israel’s elections March 17, and Netanyahu’s shift away, on any practical level, from a two-state solution, has, in a sense, liberated J Street from the constraints to which it previously hewed. At its conference, held from March 21 to March 23 at the capital’s huge Walter E. Washington Convention Center, the group put a newly pugilistic approach on display, stepping up its rhetoric against both Israel’s leadership and the Jewish establishment.

“Elections can bring about clarity, and there’s now a very clear, bright line about Netanyahu and his policies,” Rabbi Michael Adam Latz of Congregation Shir Tikvah, in Minneapolis, said as he prepared to enter the plenary session at J Street’s fifth national conference. “This has created a powerful opening for those of us who are center-left to speak out against what we now know the Israeli voters have said.”

The new sense of combativeness was clear throughout the group’s conference, which brought together 3,000 supporters from across the country. Onstage and in corridor discussions, participants referred to Netanyahu as “racist.” The group’s founder and president, Jeremy Ben-Ami, told the audience bluntly, “We cannot proceed as if we believe in the third incarnation of Netanyahu and believe he wants a two-state solution, or believe that he is not a racist, and we must react to this new reality.” Ben-Ami won lengthy applause when he addressed Netanyahu directly, telling him, “You don’t speak for us.”

Participants also approved overwhelmingly the adoption of an agenda to directly take on Jewish organizations viewed by J Street as complicit with Israel’s occupation of some 2.5 million Palestinians in the West Bank and its siege of 1.5 million more in Gaza.

“We’re saying to people, you’ve got to choose,” Ben-Ami told the Forward in a March 23 interview. “They should choose to stand with a future for Israel that is two states for two people and doesn’t continue to build more obstacles to a Palestinian state.”

Setting these clear markers between J Street and the rest of the pro-Israel community has not always been the lobby’s preferred tactic. Just last year it launched a major effort to win acceptance into the Conference of Presidents of Major American Jewish Organizations, establishment Jewry’s primary umbrella group for Israel-related issues. The attempt failed, though it ignited a debate within the community that led to restructuring of some of the Presidents Conference’s membership rules. J Street has also fought tooth and nail across the country to get local federations to host its events and speakers, and to make sure its student activists were welcome in Hillel chapters on campuses.

Netanyahu’s re-election, his comments rejecting the two-state solution and, above all, President Obama’s harsh public rebuke of the Israeli leader have changed J Street’s previous calculation. Ben-Ami insists the group has stayed in place while Netanyahu “took a step to the right,” but in reality, much has changed in J Street’s tone and in its substance.

In the face of the organized Jewish community’s broad opposition to move the Israeli-Palestinian conflict into the international arena, J Street is adopting Obama’s reported willingness to explore international alternatives to direct negotiations between Jerusalem and Ramallah.

J Street is now also seeking to underscore its differences with the Jewish establishment by waging frontal attacks on mainstream groups that it feels have blurred the lines between right and left and have, by not taking a stand on the occupation, helped erode the two-state solution.

Sharpening the message of the peace camp is also needed in Israel, argued Knesset member Stav Shaffir, who brought the crowd to its feet repeatedly as she described the battle ahead for a two-state solution. “We must fight not only against the right, but against the notion that one can blur the difference between the two visions,” the second-term lawmaker from the Zionist Union party said. “There is no center.”

Another call for arms came from an American politician dear to J Street, Illinois Democrat Jan Schakowsky, one of the first to speak out forcefully against Netanyahu’s recent visit to Washington. “This is an opportunity for this organization to take leadership,” she said of J Street, calling on its members and leaders to “be bold and clearly state our positions.”

This clarity is now playing out in both symbolic and practical measures.

One initiative is J Street’s campaign to restore the Green Line to maps of Israel used by Jewish organizations, schools and synagogues. This seemingly noncontroversial act, which focuses on an internationally recognized line that marks Israel’s 1967 borders, is meant to stir debate in Jewish venues otherwise uninvolved in Middle East politics.

J Street is also calling on its members and supporters now to look through their Jewish philanthropic portfolio and weed out groups that support Jewish settlements in the West Bank. If this campaign succeeds, it would pit liberal Jews against the charitable establishment, potentially raising tensions within communities and bringing the Israeli-Palestinian conflict into the world of federations, synagogues and charities.

On campus, where it has a large following, J Street is singling out Hillel, the Jewish campus movement, as a key target for its activism. The reason is Hillel’s exclusion of J Street and the recent decision of its president, Eric Fingerhut, to cancel his participation at the J Street conference following alleged pressure from donors.

Hundreds of J Street student supporters marched on the conference’s third day, to Hillel’s national headquarters, just a few blocks from the Washington Convention Center, to deliver a letter to Fingerhut protesting his boycott of them.

“Sadly, we must ask: Who is Hillel meant to serve? A small group of donors, or the thousands of students who are the future of our communities?” the letter asked. The students left Post-it notes addressed to Hillel on the building’s exterior before returning, visibly cheerful, to the conference, where they made up more than a third of the 3,000 participants.

(Days later, Fingerhut agreed to meet with a J Street U delegation, though not at the conference.)

The huge presence of students and young people at the lobby’s conference was well noticed not only in hallways and gatherings, but also during the plenary sessions, where students were the first to cheer and applaud the speakers and to boo any mention of Republican mega-donor Sheldon Adelson.

But while taking on the Jewish community’s center is a new mission for J Street, the dovish lobby has also made its opposition clear to its main rival on the left: Jewish Voice for Peace, an organization that supports boycott of, divestment from and sanctions against Israel.

Ben-Ami stressed that, unlike JVP, his group opposes the broad international sanctions movement known as BDS, which includes as part of its brief an insistence on the right of return to what is now Israel for some 5.2 million Arabs refugees who were expelled or fled from their homes during the 1948 war of independence.

In J Street’s view, the urgent solution to the problem they pose does not lie in opening up floodgates that could end Israel’s existence as a democratic state with a strong Jewish majority. From a Zionist perspective, Ben-Ami stressed, Israel must instead make establishing two states for two peoples a top, existential Jewish priority.

Whether its new tactical approach will succeed in ending the role of Jewish groups that, in its eyes, are acting as enablers for Israeli stonewalling remains to be seen. But initial signs indicate that J Street’s effort to stir the community is being noticed. While not mentioning J Street by name, the Conservative movement’s Rabbinical Assembly, issued a statement March 23, criticizing efforts to divide the community.

“What our community needs is more cooperation and unity in working together toward strengthening the U.S.-Israel partnership, not creating new divisions by seeking to attack fellow Jewish organizations or create new points of conflict,” the Rabbinical Assembly stated.