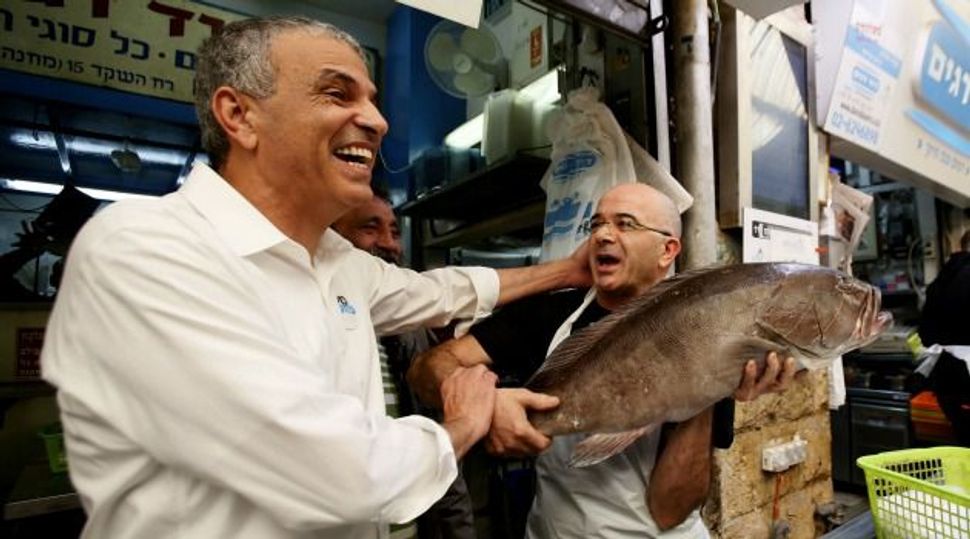 Big Fish in Small Pond: Led by Kahlon, the son of Libyan immigrants, the Kulanu party ran on a platform of economic change. Image by Getty Images

In Israel’s recent election, Yaakov Shalev, an 86-year-old Iraqi Israeli, broke his 38-year Likud streak to vote for a newcomer on the political playing field: the Kulanu party.

Kulanu means “all of us” in Hebrew, but the party has special resonance among Mizrachim, or Jews of Arab origin. Led by Moshe Kahlon, the son of Libyan immigrants, it ran on a platform of economic change in Israel, where urban Ashkenazim, or European Jews, out-earn Mizrachim by about 30%.

“He wants to help the poor,” said Shalev, who owns a picture frame shop in Tel Aviv. “If he’s Mizrachi or Ashkenazi, it’s not something I think about.”

Indeed, Kahlon speaks to voters beyond his own ethnic group. In addition to drawing Mizrachi voters from the Likud, he also counts a sizable Ashkenazi base, likely pulled from Yesh Atid, another party focused on social and economic issues. While nearly every other midsized party shrank in the March vote, Kulanu garnered 10 seats in its first election.

“He wants to take the Mizrachi story and integrate it into the collective story of Israel,” said Nissim Leon, a sociologist at Bar-Ilan University who has studied Kahlon’s appeal with the Mizrachi middle class.

Kulanu, which posits itself as a centrist party, is a new option for Mizrachi Jews. Broadly speaking, Mizrachim have voted right since the 1970s, when widespread disillusionment with the socialist Ashkenazi ruling class propelled them into the arms of the Likud Party. Former Likud Prime Minister Menachem Begin’s so-called “Project Renewal,” which rehabilitated impoverished neighborhoods, cemented the party’s Mizrachi base. Since the ’80s, Shas, the ultra-Orthodox party, has also provided a home for religious Mizrachim.

Kulanu has drawn Mizrachim who feel disenchanted with Likud’s economic record but can’t bring themselves to vote for Labor, the party of their historic exclusion. One of Kahlon’s own campaign videos even depicted him as following in Begin’s footsteps, where Likud had faltered.

Even so, Kulanu is set to join Netanyahu’s coalition, where Kahlon is to be appointed finance minister.

But whether Kulanu has sticking power remains to be seen. Kulanu is a “mood party,” said Assaf Shapira, a researcher at the Israeli Democracy Institute. Chaired by a charismatic figure who appeals to Israel’s elusive center, mood parties, he explained, zoom in on one or a set of issues plaguing Israelis, in this case the high cost of living. Kulanu’s focus on housing prices has earned it comparisons to Yair Lapid’s Yesh Atid, which won 19 seats in the 2013 elections and dropped to 11 seats in the latest vote.

Mood parties, said Shapira, also tend to wipe out after a few election cycles when they are unable to fulfill their promises. But unlike Lapid, a former TV news anchor, Kahlon had a tangible record with the Israeli public. As a Likud lawmaker, Kahlon almost singlehandedly cut the price of cell phone service to a fraction of its previous cost, a popular reform felt by nearly every Israeli.

Kahlon was born in Hadera, a working-class city near Haifa, which today is home to Russian and Ethiopian immigrants. His parents immigrated to Israel from Tripoli. The fifth of seven children, Kahlon shared a bed with his brother growing up. His father worked in construction.

Kahlon isn’t the only family member in politics; his brother, Kobi Kahlon, was the deputy mayor of Jerusalem. Still, to many he embodies the Israeli equivalent of the American dream. Kahlon declined an interview for this story because of the delicate coalition conversations at the time.

“What he represents is the Israeli dream. He’s a man who made himself,” said Leon. “He was born in the periphery and today is one of the elite.”

In the last government as communications minister, Kahlon encouraged competition among cell phone companies to cut the price of service to about a fifth of what it once was. The 2012 reform was so popular that Netanyahu urged his ministers to “be Kahlons.”

But Netanyahu and Kahlon soon parted ways. Many speculate that Kahlon felt stifled by Netanyahu, and that Kahlon might return one day to head the Likud.

Kulanu includes other prominent Mizrachim such as Eli Alaluf, a Moroccan Israeli poverty expert. Rachel Azaria, the Jerusalem deputy mayor who is number five on the list, has Tunisian and American heritage. Israel’s most famous Anglo, former ambassador Michael Oren, is in the fourth spot.

During its campaign, Kulanu barely touched the Israeli-Palestinian conflict. In an interview, Kahlon said that he supported a version of the two-state solution with Jerusalem under Israeli control, but that it was impossible today because there is “no partner” in the Palestinian leadership, using the oft-repeated phrase coined by former Prime Minister Ehud Barak. In the past, Kahlon has veered far right on the issue. He voted, for example, against the disengagement from Gaza in 2005.

Kahlon’s focus, instead, was on the cost of housing in Israel, where young couples are finding it increasingly difficult to purchase homes of their own. One of Kahlon’s proposed solutions would be to abolish the Israel Land Authority, which manages 93% of Israeli land. Privatizing land ownership, he argues, will reduce housing costs.

Some Mizrachi activists say that Kahlon doesn’t directly address their needs. Shira Ohayon, in Ashdod, said that if Kahlon were really concerned with Mizrachim, then he would work to make sure their culture is a part of Israeli mainstream education. Though she is not religious, she voted for Shas. “It is the only party who said, yes, we are Mizrachi and we are proud in our identity and we will fight for equality.”

“For me, Moshe Kahlon is not a Mizrachi person,” she said. “Not in terms of his biological origins but because of his political concepts and agenda.”

Leon agrees that Kahlon doesn’t see himself foremost as Mizrachi, but that may be part of his broad pull with the Israeli public. “He sees himself as a national leader, not as a Mizrachi leader,” he said.

Reach Naomi Zeveloff at [email protected] or on Twitter @NaomiZeveloff