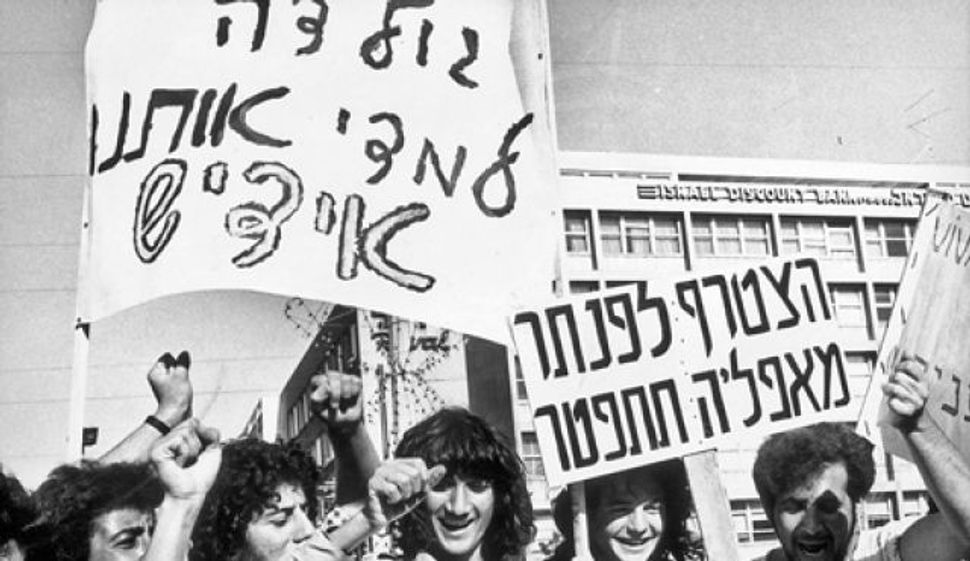 It was the spring of 1971, and the 1960’s spirit of revolution still throbbed in the streets of America and Europe. On the streets of Jerusalem, knots of young Sephardi Jews could be seen protesting, too — calling for the overthrow of Prime Minister Golda Meir and for their own liberation in Israel as an oppressed people.

They called themselves the Black Panthers of Israel. Inspired by film reels about revolutionary movements from around the world then, they strongly identified with the black American radical group of that same name.

The Black Panthers turned out to be a short-lived phenomenon in the end. But their sudden surge onto Israel’s political scene hit the country’s Labor Party establishment hard where it was most sensitive — on its claim to embody egalitarian redemption for Jews returning to what they viewed as their historic land. They were young Sephardim demanding freedom after decades of quiet desperation among the hundreds of thousands of Jewish immigrants from North Africa and the Arab world who had been settled and more or less forgotten in low-income caravans and dusty towns on the geographic and social margins of the country.

And it turns out they even produced a Passover Haggadah that year to make their point.

Rediscovered now, some 44 years later, the Black Panther Haggadah decontextualizes the struggle for liberation as a tale of their own struggle in Israel, with Golda as pharaoh and the Panthers as Moses. Reading it today is like taking a time machine back to the heart of those times.

The afflictions in this Passover tale are the overcrowded Sephardi ghettos, the discrimination against non-Ashenazim at the employment lines and the lack of secondary school education in many places where they had been settled. The song “Dayenu” describes the modern exodus from Egypt (and other Arab countries) to Israel as a story of alienation and disillusionment.

Inspired by secular leftist ideology, the Black Panthers left God out of their quest for redress. Instead, this Haggadah confronts the oppression of Sephardim by inflicting 10 plagues of protests, hunger strikes, and solidarity rallies upon the government, until it is compelled to change policies that favor Ashkenazi Jews. Redemption is the moment when the socioeconomic gap between the two communities is finally closed.

But the Panthers were not concerned with economics alone. In a forward to the Haggadah, they lash out, too, at the political establishment’s systematic erasure of their distinct culture.

“It is a crime to destroy the culture of an entire people,” the Haggadah’s authors wrote. “You took our culture that we brought with us from the Diaspora and promised a different one in its place. But you forsook us and discriminated against our communities by rendering us without culture and without faith, leaving us suspended in a cultureless vacuum.”

In the days before the Passover holiday of 1971, hundreds of Jerusalemites paid what little they could afford to Panthers hawking copies of the Haggadah on the streets of Israel’s capital. The selling of Haggadot was a neat, if unintentional parallel to how the American Black Panthers peddled Chairman Mao’s Little Red Book on the campus of University of California, Berkeley.

Reuven Abegrel, one of the authors of the Haggadah, remembers huddling with four other Panthers on the tiled floor of the shack that was their headquarters when the inspiration to write the Haggadah came. Each of the Panthers scuttled home and retrieved a copy of a real Haggadah to use as raw material. Crouched over a typewriter, they cobbled together a seven-page manifesto.

“I began reciting the Haggadah in melody,” Abergel recollects 44 years later. “This is how we identified the nuances and began replacing Egypt with Israel… we got excited, and each of us jumped up with an idea.”

The core group that founded the Panthers started out as young men with criminal records and no apparent prospects. The typos and spelling errors in the Haggadah reflect how little formal education they received. From the seedy ethnic slum of Musrara in Jerusalem, however, their ideas of revolution quickly caught fire among large swaths of Sephardim. The Panthers ripped open an ethnic conflict that was simmering under the surface since the founding of the state — and before.

The racism Sephardim faced when they arrived in Israel can be encapsulated in the words of of Aryeh Gelblum, one of early Israel’s leading journalists, who warned of “the immigration of a race the like of which we have not known in this country.”

“A serious and threatening question is posed by the immigration from North Africa,” Gelblum wrote in Haaretz on April 22, 1949. “This is a people whose primitiveness sets a record, their level of education borders on ignorance.”

The Panthers had mostly dissipated by the time of the 1973 Yom Kippur War as security woes trumped all else. But some believe that their impact on society was profound and lasting. Their protests catalyzed an increase in government welfare funding and engendered a renewed sense of communal pride among Sephardim. To this day, many activists for social justice point to the trail blazed by the Panthers. Anti-Sephardic discrimination also persists to this day, however, as does the income disparity between Ashkenazim and Sephardim.

In the decades after the movement’s demise, the Haggadah went missing. All copies appeared to have been lost. Even an archive in Jerusalem devoted to the Panthers could never find one.

Eventually, an original turned up in the private collection of a Reform rabbi in Tel Aviv. Rabbi Meir Azari, an amateur Haggadah collector, discovered it a few years ago — some withered and yellowed pages tucked in between the pages of a different Haggadah. The seemingly vanished revolutionary tract was found. He remembers reading the Panther Haggadah for the first time. “It was a very angry Haggadah…full of accusations against the Ashkenazis and the state,” he said. “It was amusing to read.”

Azari reached out to Abergel and other Panthers to share the news and confirm the document’s authenticity. For Abergel, seeing the real thing after so many decades was a fulfilling moment. “I had been searching for the lost Haggadah for so long.”

Asaf Shalev is writing a book about the Black Panthers of Israel. He will soon be graduating from the investigative reporting program at Columbia Journalism School. Reach him on Twitter: @asafshaloo