Did Barney Frank’s Coming Out Kill Chance To Be First Jewish House Speaker? 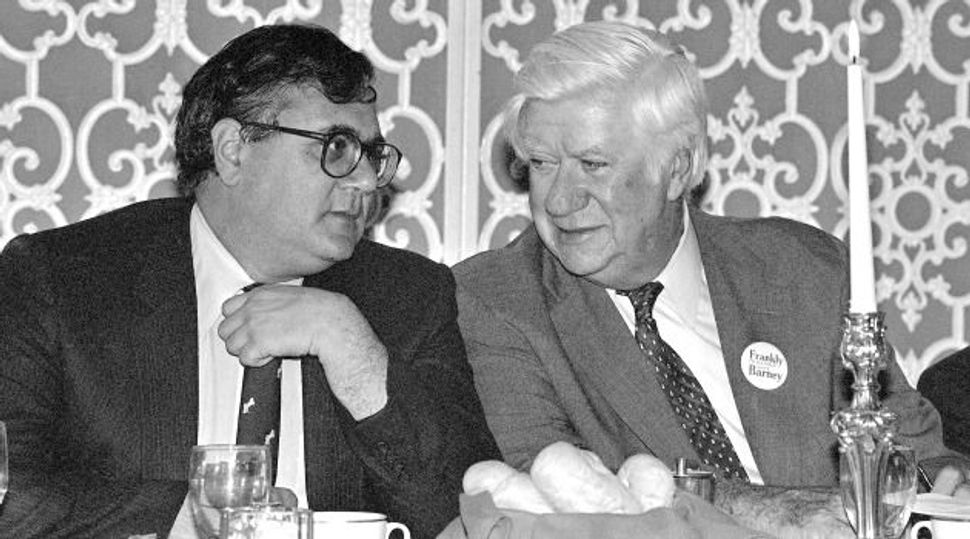 Barney Frank retired from Congress more than three years ago, but the trailblazing Jewish gay politician has not retired from public life. In a new book, “Frank: A Life in Politics From the Great Society to Same-Sex Marriage,” and in a series of interviews and articles, Frank is speaking out, in his own candid and barbed manner.

It’s a style that has become one of his defining characteristics, and one he deploys, too, in his book, about the struggle of a gay lawmaker who entered politics at a time when living in the closet was almost the only option for a gay office seeker.

Frank says he wrote the book to encourage young lesbian, gay, bisexual and transgender individuals entering public life to overcome the calls that still exist to hide their identity. “I hope my example will give people the courage of their own conviction,” he told the Forward.

As a model for such inspiration, Frank can point to some important achievements in a career that saw him reach the prestigious position of chairman of the House Financial Services Committee. While in that post, Frank was tasked with reforming Wall Street after the 2008 financial meltdown and, against the odds, managed to get the Dodd-Frank Wall Street Reform and Consumer Protection Act through Congress, imposing tougher regulations on the financial industry.

But in his book, Frank also describes the reaction of House Speaker Tip O’Neill in 1986 when he decided to come out as gay. The legendary Democratic leader supported Frank, but warned him of the political price he would pay. “I thought you might become the first Jewish speaker,” O’Neill told him.

Frank did not become the first Jewish speaker. In fact, the House of Representatives has yet to have any speaker of the Jewish faith. But Frank doesn’t feel sorry. “I knew I was gay, so I knew it would never happen,” he said. “But the fact of the matter is that it did not make me less successful, nor did it make me diminish my influence.”

Being gay brought Frank to an uncommon view of the State of Israel. As a staunch liberal and a progressive leader, he has never minced words when speaking out against Israeli policies, especially as they apply to Israel’s conflict with the Palestinians and to the ongoing occupation. But Frank also lauds Israel’s record on LGBT rights. He cited the Israel Defense Forces’ policy of accepting gay men and lesbians in debates over Don’t Ask, Don’t Tell, and used Israel as an example of LGBT inclusion whenever possible.

“I’d ask people a trivia question,” Frank recalled. “In the history of the United States, three heads of state have spoken positively about gay rights in the House of Representatives. Who are they? The answer is, Bill Clinton, Barack Obama and Benjamin Netanyahu.”

This, however, in no way means that the former Boston lawmaker supports the Israeli prime minister. In Frank’s eyes, Netanyahu’s recent actions, statements and policies have made him one of the biggest problems facing liberal supporters of Israel.

“I think this is very, very serious,” Frank said. “I’m afraid as long as he says, ‘I’m not even trying to reach a settlement which allows Palestinian to have their own state,’ there is going to be a very deep alienation from liberals here and in Western Europe.”

Frank should know — he has spent hours trying to make the liberal case for Israel in meetings on college campuses, and at events organized by the American Israel Public Affairs Committee. Now, with Netanyahu’s attitude toward a two-state solution shifting, “I think he basically got people to say, ‘Look, I need to make a distinction between my support for Israel and my disagreement with its government,’” Frank said.

The Jewish community, Frank argued, should now speak out clearly against Netanyahu’s policy against a two-state solution: “In my view, when a friend, someone you care about, deeply makes a serious mistake, your obligation is to tell him that.” And as long as the Israeli leader’s views do not change, the Jewish community, Frank maintained, should “continue to differentiate Israel from Netanyahu.”

Frank’s latest meeting at the recent AIPAC conference turned contentious after he urged American Jews to speak out against Netanyahu’s policies. Frank claimed there that the lobby had actively advocated in favor of the war in Iraq back in 2003. Members of AIPAC strongly opposed this depiction, saying that the lobby had no policy of backing the invasion of Iraq. Frank concedes he might have gotten it wrong.

“I will have to check and may have to apologize to AIPAC for saying they were lobbying for the war,” he said. But he did hear a strong pitch for going to war against Saddam Hussein from individual AIPAC activists, who were perceived as deeply tied to the lobby’s views. “I apparently was wrong when suggesting that AIPAC had formally taken this position. But it was also my experience, and that of all Jewish members and people with large Jewish populations, that the people who are regularly AIPAC activists were lobbying for the war.”

Did Barney Frank’s Coming Out Kill Chance To Be First Jewish House Speaker?