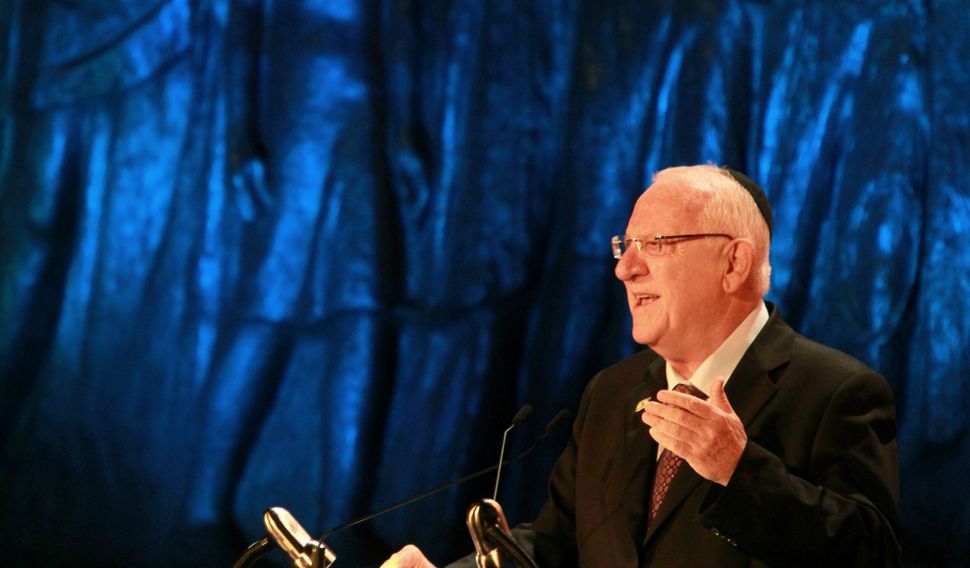 Sixty-seven years after the State of Israel’s founding, its president told reporters that it is “not obvious” that Israel will survive into the future.

Offering sober remarks timed for release on the eve of his first Independence Day as Israel’s chief of state, Reuven Rivlin pointed to fissures deep within Israeli society and to the lack of acceptance Israel faces from its Palestinian neighbors as among the issues that cause him to worry about his country’s durability.

“For me, until now it is not obvious that the Israeli flag is up there, and we are in a position that everyone recognizes that Israel is a fact and Israel will last forever,” he said, holding forth from a plush yellow chair next to a platter of chocolates in his residence in Jerusalem’s Rehavia neighborhood.

In framing his comments for Independence Day, or Yom Ha’atzmaut, as it’s called in Hebrew, Rivlin struck a theme that he has stressed often elsewhere in speaking for the first time as head of state to a group of reporters from Anglo Jewish news outlets April 13. He cited Jewish racism against Arab citizens of Israel, who constitute one-fifth of the country’s population, as one of the main concerns for his worries about the country’s future.

But Rivlin was clear on where he thought the primary obligation for addressing this problem lied. Referring to the Israeli Jews, he said, “We are the majority, and the responsibility is ours; the burden is on our shoulders.”

At the same time, Rivlin did not hesitate to cite Palestinians living in the West Bank, which Israel now occupies, as a continuing threat to the country’s future, along with those in Gaza, which Israel is blockading, citing security concerns. Asked whether his anti-racism efforts extended to the millions of Palestinians living under Israeli control beyond the Green Line marking Israel’s internationally recognized boundaries, Rivlin said: “It is our responsibility, but we have to face reality. They are trying to bring an end to our dream and to our vision that became a reality.”

For all that, as president, Rivlin is no less staunch than he was as a Likud Member of Parliament in opposing a Palestinian state, as it’s called by much of the international community.

“Maybe we can even have a federation,” he said. That would be an interim step until Israel’s Jewish population reaches 12 million, and Palestinians “will decide that the best place for them to live is Israel.”

Rivlin acknowledged: “I know I’m very idealistic and I know we have problems and we have to solve them. This is a vision. But [Zionist founder] Theodor Herzl said something that was much more of a dream than my vision. He said if you believe it, it could become real.”

At the same time, Rivlin decried efforts to favor Israel’s Jewish identity at the expense of its democratic one. “We cannot keep the Jewish state without being a democratic state,” he said.

Rivlin also addressed the problem of equality between the disparate Jewish communities in the country. He spoke about Zionism’s early days, when Ashkenazi Jews discriminated against Yemenite Jewish laborers, telling them they couldn’t sleep among them “because you are black.” Today, Rivlin said he has two Yemenite grandchildren, one Moroccan and three Ashkenazim. “No one is perfect,” he joked.

Since he assumed office last July, Rivlin, who is 75, has served as a kind of grandfatherly figure for the fractured Israeli public. A lifelong Likud politician associated with Israel’s right, he has attained a degree of popularity among Israelis on the left for his anti-racism work since assuming the largely ceremonial, but symbolically important, post of president. Speaking of Jewish-Arab relations inside Israel more broadly, Rivlin painted a more optimistic picture, saying that Israeli Jews and Arabs were on the route to peaceful coexistence. He said that the government had devoted 1 billion shekels to close the gap between Jewish and Arab societies.

But at the beginning of the wide-ranging meeting, Rivlin’s hawkish roots were showing, too. He detailed the threats facing Israel, calling the American-led framework for a nuclear deal with Iran “against the ideas and the knowledge of the Israelis.”

“The ayatollahs are trying to unite the whole Arab world against Israel by saying that Israel is something that should be brought to an end,” he said.

When asked what he could bring to the presidency that his predecessors didn’t, he said: “First of all, the ability to discuss matters and to argue and debate. I really believe in the last few decades we are not listening to each other.”