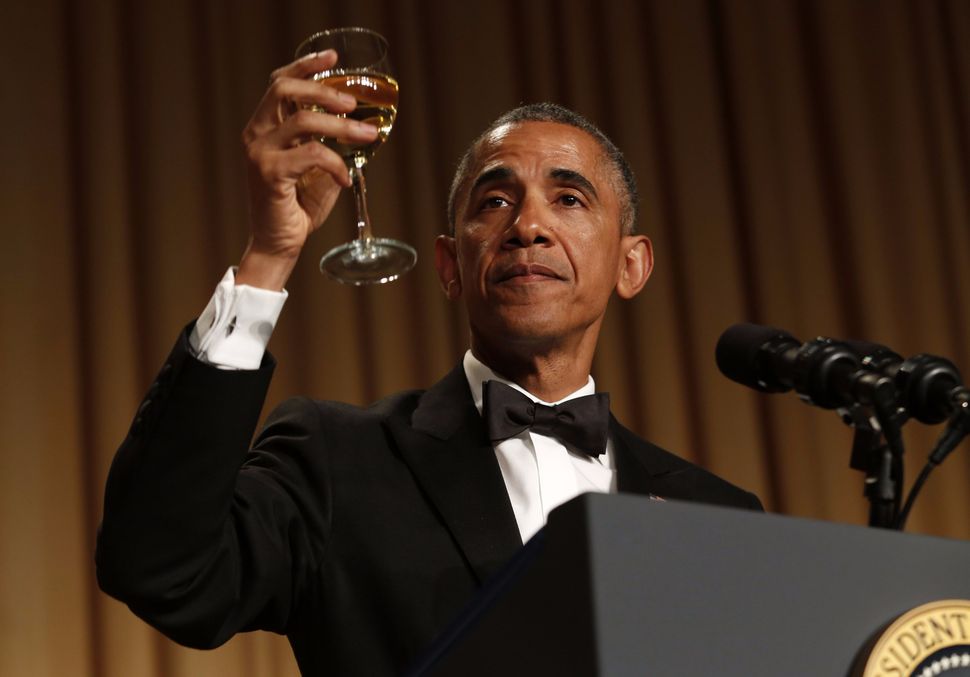 At the gathering he jokingly called “a night when Washington celebrates itself,” President Barack Obama took light-hearted aim on Saturday at a range of political friends and foes, including the people running to succeed him.

Obama’s comedy routine at the annual White House Correspondents’ Dinner included a zinger that combined a self-deprecating dig at his own aging appearance and at Israeli Prime Minister Benjamin Netanyahu, with whom he has a famously frosty relationship.

“I look so old,” he said this year, “that John Boehner has already invited Netanyahu to speak at my funeral.”

That was a unsubtle reference to the controversy sparked when Boehner, the Republican leader of the House of Representatives, invited Netanyahu to speak to Congress last month against a nuclear deal with Iran that the Obama administration was negotiating with other world powers.

He also took a sly dig at Hillary Clinton, the current front-runner to be the Democratic candidate in the 2016 presidential election.

Noting that some Americans are living in a time of uncertainty, Obama said, “For example, I have one friend just a few weeks ago, she was making millions of dollars a year and she’s now living out of a van in Iowa.”

Clinton, who as a former secretary of state, former senator and former first lady is one of America’s best known figures, traveled around in a van this month in a deliberately low-key trip to the state that holds an early contest in the election primary season.

Obama, now in office for six years, is a polished performer at an event that draws journalists, politicians and celebrities to a cavernous ballroom in the Washington Hilton.

The comedian at the dinner, Cecily Strong of NBC show “Saturday Night Live,” also fired freely around the audience. Taking a jab at some media coverage of women politicians, she had the audience repeat after her, “I solemnly swear not to talk about Hillary’s appearance, because that is not journalism.”

Strong also took aim at the Secret Service that protects Obama, which has seen a slew of embarrassing recent bungles. Referring to a series of deaths of black men at the hands of law enforcement that have provoked protests around the country, she said, “They’re the only law enforcement agency that will get in trouble if a black man gets shot.”

On a serious note, Obama noted there were journalists around the world who were unjustly imprisoned, and cited the case of Jason Rezaian of the Washington Post, an American-Iranian who is in prison in Iran.

“For nine months, Jason has been imprisoned in Tehran for nothing more than writing about the hopes and the fears of the Iranian people,” Obama said, adding that he had told Rezaian’s brother Ali that he would not rest “until we bring him home to his family safe and sound.”

The case represents a point of friction with Iran at a time when the Obama administration is seeking with five other major powers to conclude a nuclear deal with Tehran after reaching a framework agreement earlier this month.

The dinner, a long-running tradition organized by the White House Correspondents’ Association, has morphed from being a relatively low-key gathering of journalists and their sources from around town. In recent years, media organizations have invited not just sources but Hollywood stars and sports celebrities.

Washington has a love-hate relationship with its annual spring party. Those who go tend to enjoy having dinner with the president, albeit along with more than 2,600 others, seeing sources in a semi-casual setting and mingling with celebrities.

But the dinner also draws an annual chorus of condemnation from critics who say that laughing and partying with sources is not conducive to hard-hitting journalism.

The dinner is actually a weekend of events – various media organizations host pre- and post-dinner parties that give the affair an echo of Hollywood at Oscar time.