Hiking the Path of Abraham Through Unseen Corners of West Bank 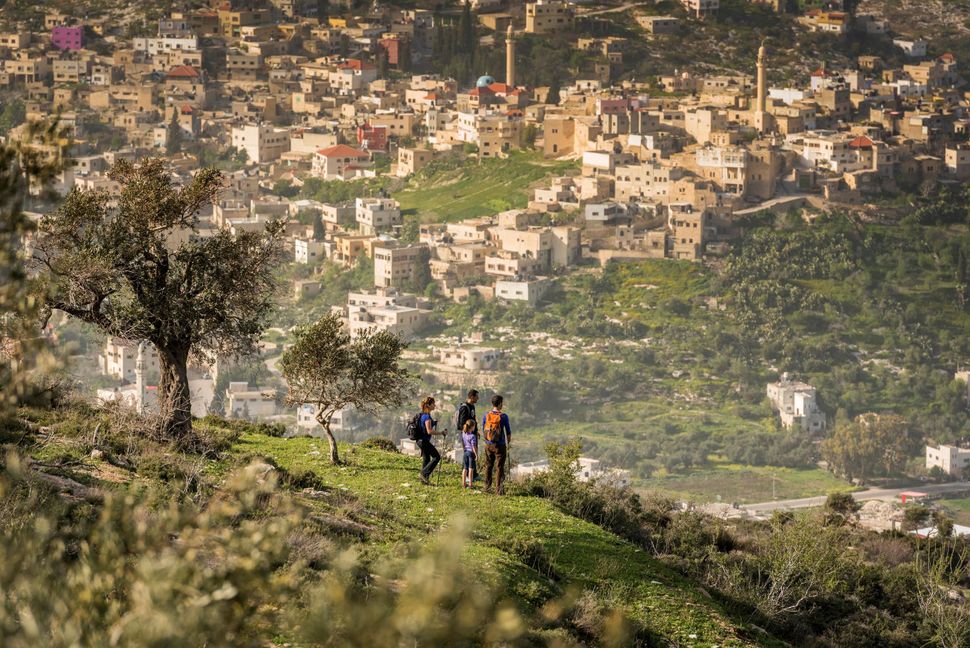 Breathtaking Vista:_ Hikers take in the view of the town of Sanur from the ascent to Mount Hureish in the West Bank._ Image by Courtesy of Abraham Path

Bani Naim is a Palestinian village straight out of the Bible. Tradition has it that the beige hilltop hamlet is the site from which Abraham watched the destruction of Sodom and Gomorrah. It is also supposedly the resting place of Lot, Abraham’s nephew in the Book of Genesis.

On my hiking trip to the village last fall, Bani Naim’s ancient tableau was interrupted by a reminder of the present. Two Israeli soldiers in head-to-toe fatigues climbed down from a nearby watchtower to question my tour group.

Our guide, George Rishmawi, ran interference: The soldiers wanted to know if anyone had taken a photo of the watchtower, which overlooked a road leading to a Jewish settlement. Two Frenchmen raised their hands. The soldiers demanded that they delete the photos from their digital cameras, and watched to make sure they complied.

When I later asked Rishmawi whether the interaction bothered him, he demurred with a shrug:

“It is an opportunity to tell the military what we do,” he said.

Rishmawi is the optimistic force behind a new community-based tourism project in the Israeli-occupied West Bank. His organization, Masar Ibrahim Al Khalil (Abraham Path to Hebron), leads weekly hikes through the Palestinian territory, including remote areas where tourists and activists almost never venture. Each walk ends with a traditional Palestinian meal at the home of a host family.

I have been hiking with Masar Ibrahim on and off since September on a north-south trail that begins in Jenin and ends in Hebron. Run-ins with the Israel Defense Forces are rare, except for in Hebron, where Israeli troops guard hundreds of Jewish settlers.

But, over nine months of trekking, I saw firsthand that the West Bank is much more than the Israeli military occupation that has come to define it for the outside world. From the Byzantine ruins of Sebastia to the lush flora of Wadi Qelt to the vast Jericho desert, the West Bank is a varied and dazzling landscape. I have broken bread with Palestinian families in Jericho’s Aqbat Jabar refugee camp, at a women’s cooperative in Burqin and in an apartment building in Nablus.

“I feel so sorry for people who are coming and spending all of their money to meet dead stones, and not meeting any human beings,” said Rishmawi.

The West Bank hiking route is actually a small portion of a new long-distance walking trail called Abraham Path. It is intended to span vast portions of Turkey, Syria, Iraq, Jordan, Egypt, Saudi Arabia, Israel and the Palestinian West Bank. The path follows the ancient caravan route of the patriarch Abraham, improbably linking countries in conflict with one another or mired in domestic wars. 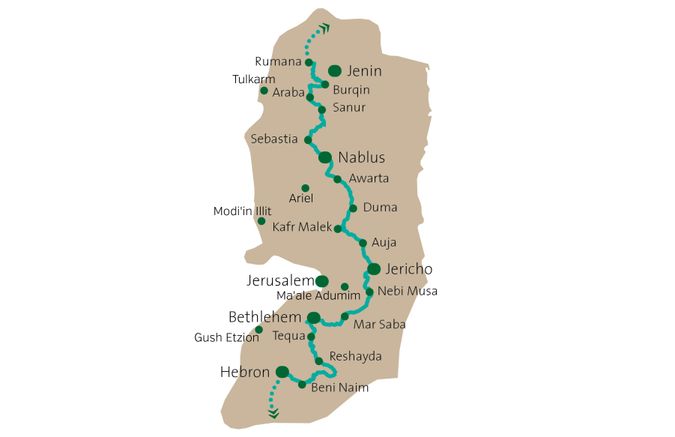 Our Routes:_ The hiking path wends its way through the villages of the West Bank._ Image by Courtesy of Abraham Path/Adapted by Forward

William Ury, a Harvard-based negotiation expert, came up with the idea for the trail in 2006. He wanted to find a way to overcome suspicion between Easterners and Westerners in the wake of September 11 and the war in Iraq. Ury’s Harvard team studied other cross-border trails, such as the Santiago de Compostela in Spain and France. Then they charted a path that would loosely trace the sites visited by Abraham on the fabled journey from his birthplace in the ancient city of Ur, in present day Iraq, to the Promised Land in the Bible. Abraham is central to three major Middle Eastern religions — Islam, Judaism and Christianity — and according to Ury, the legendary hospitality of the patriarch infuses the project.

“The path tries to connect all of these places where there is a local cultural memory going back hundreds or perhaps thousands of years, honoring the story of showing kindness toward strangers and social justice,” he told me.

The Abraham Path Initiative, an American not-for-profit organization, contracts with local partners, such as Masar Ibrahim, in the countries through which the path runs. Or at least that’s its aim. In many places today, it remains only a dream. While Iraqi Kurdistan does have some travelers, the Syrian portion of the project remains dormant because of the civil war. The Saudi section is also inactive.

Of the entire path, the West Bank segment is the most developed. That’s in part due to a $2.3 million grant from the World Bank. The Palestinian project also has readily available clientele in the many foreigners employed by international aid groups tackling the Israeli-Palestinian conflict, who want to stretch their legs on the weekend.

“There are other parts of the path, but it is the flagship,” said Ury. “It’s paradoxical because when we started working on this idea, you would have thought the last place for the path to really take off would be the Palestinian West Bank.”

Though some Palestinians hike for pleasure, the practice isn’t widespread in the West Bank. Across the Green Line, on the other hand, hiking is woven into the Israeli national story. Early Zionist pioneers hiked through pre-state Palestine as a way of forging a modern connection to the Jewish biblical homeland. Today, hiking is part of the Israeli public school curriculum, and many students have trekked the length of the Israel National Trail before they graduate from high school.

Because Israeli hiking culture is already so well developed, the Israeli portion of the Abraham Path — part of which overlaps with the Israeli National Trail — hasn’t received much attention or funding inside Israel or abroad.

Meanwhile, the Palestinian trail is quickly gaining popularity. It was recently named the best new walking trail in the world by National Geographic Traveller UK.

The West Bank hikes typically begin on Saturday mornings near the Old City of Jerusalem’s Damascus Gate, where a white van picks up the dozen-plus participants. On the first hike of the 2014 fall season, the bus deposited my group in a suburb of Jenin at an office building with a rusty Palestinian Authority sign. That was where we met our guide, Muhammad Atari, a 37-year-old from a Jenin suburb who was wearing a bucket hat.

Almost as soon as we set out, Atari was stung by a bee on his forehead. But that didn’t slow him down. Together with Rishmawi, who was there to supervise the inaugural hike, he led us westward toward our destination of Burqin. Sometimes, the path was clearly marked; other times we combed our way through olive farms without a visible route beneath our feet. We crested a hilltop, and Atari gestured toward the green-brown farmland in the distance: the Jezreel Valley in northern Israel, inaccessible to most Palestinians.

About halfway through the hike, we reached Ta’ennek, a village of multicolored homes surrounded by terraced olive groves. We passed a group of young men and Rishmawi sped up to walk next to me. He whispered to me that I was probably the first woman in shorts the men had ever seen.

Since then, Rishmawi has come to refer to me, jokingly, to his tour groups as the “American girl in shorts,” as a way of reminding visitors to respect local sensibilities in the field. That’s one small component of building a culture of hiking in the West Bank, where the trust of local Palestinian communities is paramount for access.

Before he guides visitors through a particular village, Rishmawi appears before a town hall meeting to introduce Masar Ibrahim. He then locates families willing to host tourists on post-hike lunches and overnights, and trains them in accommodating large groups. Masar Ibrahim also renovates the homes of some of the host families. 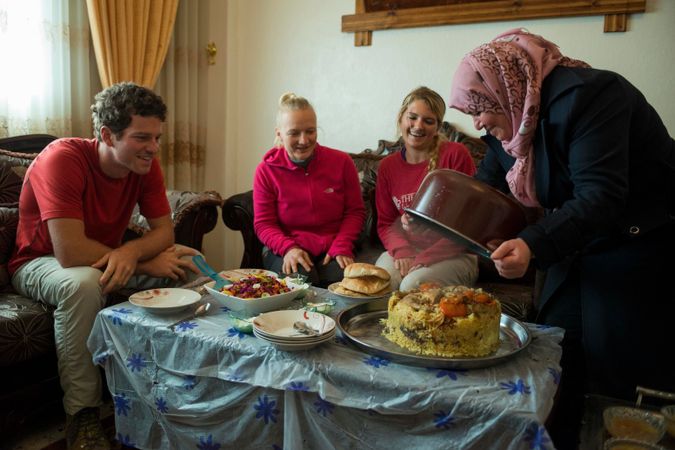 Home Hospitality: Hikers on Abraham Path join a host family for lunch in Aqraba, in the Nablus area of the West Bank. Image by Courtesy of Abraham Path

Palestinian villagers are eager to welcome foreigners, Rishmawi said, but they worry about the project’s impact on their land. “Sometimes communities are scared that [Israeli] settlers will claim that this is the Abraham Path and people will claim it and take their land,” he said.

The group avoids walking through Israeli settlements themselves as a matter of policy. “Settlements are occupiers, so I don’t want to go and ask for hospitality from settlements on our land,” said Rishmawi.

Villagers also want to know whether the project involves Israeli cooperation. The answer is no: Though they are both working on portions of the long-distance Abraham Path, the Israeli and Palestinian affiliates keep a deliberate distance.

“People see [cooperation] negatively,” explained Rishmawi. “Because you are under occupation you are not expected to cooperate with the occupiers in such a way, and the Palestinians need to develop anything they want themselves.”

“They don’t want to work with us and in some ways I can understand that,” said Shai Yagel, who coordinates the Israeli segment of the Abraham Path. “On the other hand I can just be sorry for that.”

In the future, Rishmawi said that he hopes to label the West Bank path with official Abraham Path trail markers. The task is more challenging than it sounds. Since so much of the trail cuts through land controlled by Israel, he will need the Israeli government’s permission to do so.

The Israeli group is also seeking government permission to blaze a new trail through the Negev. That is complicated for other reasons. According to Yagel, Israel is reluctant to label the path through Bedouin villages whose legality the government doesn’t recognize. The reason, he said, is that it would give them the appearance of permanence as the government is seeking to uproot and relocate some Bedouin towns.

Like all parts of the Abraham Path, there’s no way of knowing if the patriarch actually traversed the planned Negev route. But since Abraham was said to have dug a series of wells in the modern day Negev city of Beer Sheva, it’s close enough, said Yagel.

“It’s all kind of part of a myth, and no one knows where he walked even,” he said. “I think the important thing is not the actual path but the values that come with it.”

As for me, I intend to continue hiking the Abraham Path. In a pair of wide-leg khaki pants, of course.

All photos taken by Frits Meyst

Hiking the Path of Abraham Through Unseen Corners of West Bank