Tel Aviv Train Is Coming Despite Fears of Rats and ‘Carmaggedon’ 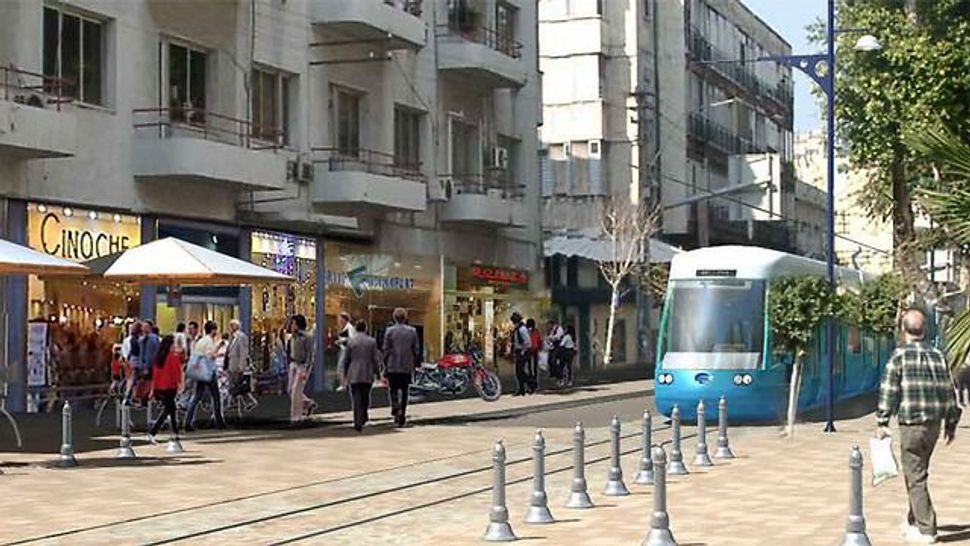 In 1936, Israeli poet Nathan Alterman was already bemoaning Tel Aviv’s lack of a subway. The “underground dream” of the new city, he wrote in Haaretz, had “evaporated.”

Lamenting the transportation system in Israel’s metropolis has practically become a national pastime, as government inaction has delayed such a project for decades. But now, 79 years after Alterman penned his verse, workers have finally broken ground on Tel Aviv’s new underground train, the first phase in a multicity mass transit project.

It’s not quite a subway — in most portions beyond Tel Aviv, the train is at street level — but it goes a long way toward assuaging Tel Aviv’s nagging inferiority complex about whether it can be considered a world-class city without world-class transit. 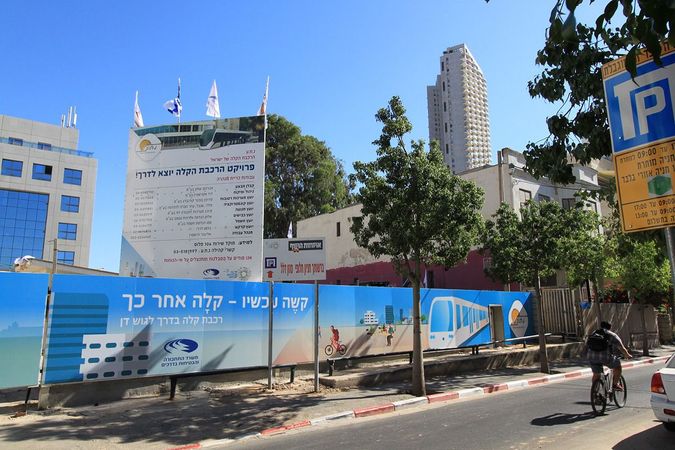 “Every important city should have an underground; even Cairo has one,” said Maoz Azaryahu, a Tel Aviv native and professor of geography at the University of Haifa. “It’s a kind of sign of modernity, and Tel Aviv priding itself as a modern city is very backward when it comes to public transportation.”

In early August, work began on two of the 10 stations in the urban Tel Aviv portion, part of the so-called Red Line. But along with disbelief that the project had kicked off at last, Tel Avivians expressed apprehension about what the massive construction might unearth. In advance of the drilling, Israeli publications ran interviews with exterminators, stoking fears that rats will flood the streets in “revenge” for being jostled from their underground habitat. While some city dwellers call the rat theory a bald exterminator public relations stunt, others are genuinely freaked out. 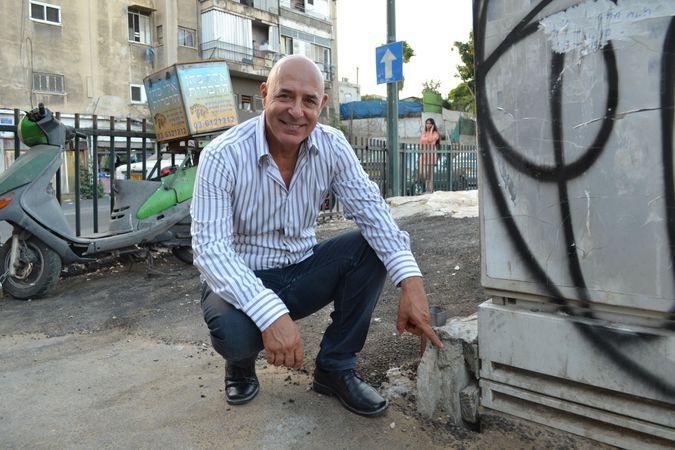 ** Things From Below:** Exterminators like Eli Cohen have warned that the construction might set loose an influx of rats on the city. Image by Naomi Zeveloff

“It sucks,” Noam Dotam said when asked about the drilling a block away from the insurance agency where she works, on South Tel Aviv’s Allenby Street. On a cigarette break with a friend, the 26-year-old said she was anticipating rats, road closures and traffic. She said the construction would lengthen her commute, at least in the short run.

“It will take longer to get home,” she said.

The concept of a Tel Aviv area train predates the creation of the State of Israel in 1948 and even the founding of the city in 1909. According to Harakevet, an English-language newsletter about Middle East railways, the idea was floated as early as the late 1800s in the Ottoman period. That was when Lebanese engineer George Franjieh proposed a tram to cross Jaffa. The line was never built, but the concept stuck.

In 1973, Israeli Prime Minister Golda Meir approved of a plan for Tel Aviv mass transport. But for years the project stalled. In the 1990s it was a topic of debate in a Tel Aviv mayoral race, with candidates Ron Milo and Avigdor Kahalani at odds over whether Tel Aviv deserved a subway or a light rail. (Milo won the race, but the current construct is a hybrid of the two ideas.)

Eventually, Israel looked to private companies to build the rail, awarding a contract in 2006 to a group of five international companies and one Israeli one that would execute and run the project for its first 32 years. But their efforts flatlined amid financial problems. In 2010, Israel nationalized the project, handing it over to the NTA Metropolitan Mass Transit System, Ltd., a government company founded to deal with the Tel Aviv area’s gnarly transportation woes.

Part of the reason that the Tel Aviv rail has been so long delayed — to compare, Jerusalem’s light rail opened in 2011 — is that it entails coordination between multiple municipalities that make up the city’s greater metropolitan area, called Gush Dan. The Red Line alone encompasses five municipalities: Bnei Brak, Petah Tikvah, Ramat Gan, Tel Aviv-Jaffa and Bat Yam. Costing 16.1 billion shekels (about $4.2 billion), the Red Line is slated for completion in 2021. It will carry some 235,000 passengers in and out of Tel Aviv each day.

When the entire system is done — no one knows exactly when — it will consist of eight lines totaling around 130 miles of track. According to an NTA representative, it will not run on the Jewish Sabbath per Israeli law.

Meanwhile, without a mass transit system, Tel Aviv grew up with cars. Once a small seaside city, it expanded as waves of Jewish immigrants populated the city and its environs. Like Los Angeles, Phoenix and Houston, over the years the city became synonymous with traffic jams and parking shortages; it is not unusual for Tel Avivians with wheels to spend an hour each evening after work in search of a street side parking spot. The Gush Dan train is meant to alleviate congestion, but in the short term it is likely to make it much, much worse, as major Tel Aviv streets will be blocked off for years. In the tradition of major American traffic snafus, Haaretz predicted that Tel Aviv will soon endure “carmaggedon”. 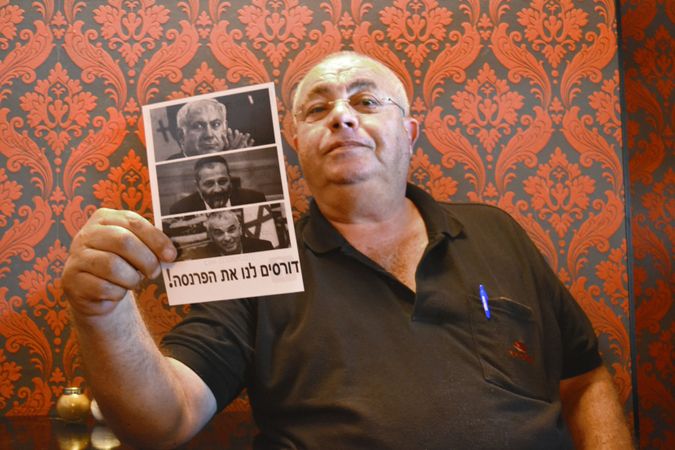 Whether or not the light rail will prove to be Tel Aviv’s Big Dig — the Boston mega-project that ran severely over budget and tore up the city for decades — remains to be seen. But Chris Whitman, a Boston-area native who works at a Tel Aviv workers’ rights hotline, wasn’t dreading the construction. He said that the city seems to be rerouting traffic with relative grace, for now. “At least they are putting up signs and people seem to be getting it,” he said. “Maybe these are lessons learned from the Big Dig.”

The next step was the demolition of the Maariv Bridge, a hulking ’70s-era overpass in central Tel Aviv, to make room for the second station.

Across the street from the Maariv Bridge is one of the oldest steakhouses in Israel, called Mifgash HaSteak (roughly, “Steak Meetup”). The restaurant has become the de facto headquarters for a movement of shop owners who worry that construction will demolish their livelihoods. Their motto, printed on fliers with photographs of Prime Minister Benjamin Netanyahu, Finance Minister Moshe Kahlon and Economy Minister Aryeh Deri, is, “The government is running over our income.”

“We are independent taxpayers,” it continues, “we serve in the army, we built our businesses, we slave away and one day they are going to trample everything we built.”

Sitting in the wine room, Shir Sagie, the spokeswoman for the fledgling movement, was busy typing away on a black laptop in advance of a neighborhood meeting. Her husband is a key cutter, and he is anticipating major losses in the coming phases of the project when customers won’t be able to reach his store. Sagie said that the group is asking for three provisions: compensation for affected businesses, such as in wartime; a relief from city taxes during the construction period, and representation in the NTA decision-making process moving forward.

“The businesses are going to collapse,” she said. “No one wants to eat in a construction zone.”

Soon, a barrel-chested man in a black shirt walked in. Mickey Vinner is the head of the Israel garage union. While restaurants are still able to receive customers on foot, car garages will be totally cut off from their clientele. Meital Lehavi, a Tel Aviv deputy mayor, said that the city is aware of the issue and is planning alternative routes for customers to connect to their garages. But Vinner is skeptical.

“They say they have a plan, and they don’t have any plan,” he said.

Not all business owners are panicked about the train’s effect on their livelihood. Eli Cohen, head of Israel’s exterminators association and part of a family of legendary Israeli snake catchers, said that he expects “tens of thousands” of rats to stream into the city, leading to a possible sanitation crisis in Tel Aviv. The city’s underground is already filled with rats, he said, and when the drilling begins in one area they will flee to another, eventually coming onto streets and sidewalks.

He rejects the accusation that exterminators are peddling fear in order to drum up business, saying the rodent threat is not to be underestimated. On a brief tour near South Tel Aviv’s central bus station, he stopped by a crumbling apartment building to point out droppings and the carcass of a rat that had met its end near a pile of used tea bags: “And this is before the train.”

Tel Aviv Train Is Coming Despite Fears of Rats and ‘Carmaggedon’