Reforming Ultra-Orthodox Education — One Teacher at a Time

In November of last year, Beit Berl, a teachers college in Kfar Saba, north of Tel Aviv in Israel, held a graduation for bachelor of education students. The ceremony was unremarkable but for the students it honored: All 63 of them were ultra-Orthodox Jews.

They were the first cohort in a new program to educate better teachers in Haredi schools. Because Beit Berl is a secular institution — usually shunned by ultra-Orthodox, or Haredim — these men were pioneers of sorts.

Ask any sociologist in Israel, and you’ll learn that that one of the biggest quandaries facing the country is the rapid growth of the ultra-Orthodox. Though Haredi Jews constitute less than 12% of the population, they are growing faster than any other group.

More than half of all Haredi Israelis live below the poverty line. The Haredi education system, which focuses on religious studies at the expense of secular topics, does little to nothing to prepare students for gainful employment. For the past few years, Israeli leaders — including some quiet Haredi voices — have been calling to reform the Haredi education system, which would ultimately help the Israeli economy.

One part of reforming Haredi schools is to train better teachers. That’s where Beit Berl comes in. An academic college founded in the 1970s, Beit Berl specializes in teacher training programs. It is the only teachers college in Israel to offer classes in Arabic, the language taught in Arab schools. Yet despite its commitment to inclusivity, until recently the college had not yet successfully recruited Haredim.

That changed in 2013, when two Haredi men, Ishayau Druk and Elchanan Feder, approached administrators at Beit Berl. The pair represented a group of men who had recently received teaching certificates from a Haredi seminary and wanted to continue their education. Coming from a highly insular background, the men knew that their presence on campus would pose a challenge to Beit Berl. Many of them had studied only Jewish topics, placing them far behind the average Beit Berl student in secular subjects like English. Furthermore, they would enroll only if the school could accommodate their religious lifestyle.

Beit Berl accepted the students, and the challenges that they brought with them. A year later, it opened the Center for Haredi Educators, which offers bachelor of education programs in three disciplines: math education, youth counseling, and both informal and special education. It also offers tutoring in basic subjects like English and math, which many students need. There are currently 200 students in the school — both men and women — and Beit Berl plans to triple enrollment in the next five years.

“The college was ready to go on a journey that was sort of unknown and unusual,” Druk said. “The fact that we chose this institution means we received answers to the problems we brought to the table.” 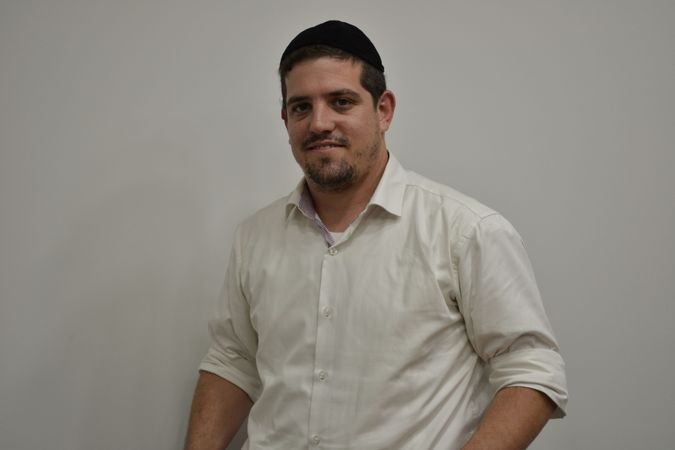 A New Education: Elchanan Feder is one of the two male Haredi students. Image by Naomi Zeveloff

The center is housed in a white building in a quiet corner of campus, where Haredi students have little interaction with other secular students at the college. Classes are offered at night so that they won’t interfere with yeshiva studies or work. Women and men attend classes on different days of the week in order to observe Jewish modesty codes. The only snacks offered are kosher.

The students have also had to adjust their expectations. For instance, the men take one class from a woman instructor, Orit Lerer-Knafo, an expert in youth counseling. Lerer-Knafo’s class is an exception to the rest of the program, where men learn from men and women from women. The students also sometimes learn material that is considered immodest by Haredi standards. When objections come up — such as the time a group of female students complained about a lesson that included the psychoanalyst Sigmund Freud’s references to genitalia — the material is occasionally altered, but never removed from the course.

“We don’t say, okay, we won’t teach it,” said Tali Hayosh, the academic coordinator of the program. “But we do it in a way that they will be ready to accept it.”

According to Tamar Ariav, Beit Berl’s president, the center is fulfilling Beit Berl’s mission to advance underprivileged groups in Israeli society. While the Haredi community has immense political power in Israel, rank-and-file Haredim live in poverty and lack basic education. Beit Berl’s success with this group depended on its ability to push the members academically while respecting their lifestyle. “We figured out that we need to open our doors to the community and hug them as they are,” Ariav said.

There have been hiccups along the way. Hayosh recalled that one professor asked the male students to sit separately from one another during an exam. Not knowing that it was a standard formation for a test, the students believed that the professor didn’t trust them not to cheat. Furious, they staged a small protest and refused to take the test until the professor convinced them that this was typical of all academic courses.

In order to smooth over the inevitable bumps that come up, the school hired a Haredi secretary, Haya David, to serve as a kind of mediator between the secular staff and the students. “We are not an easy group,” said Meital Leitman, a 31-year-old student from Ra’anana who sported a purple long-sleeve shirt and a glossy wig. She had been working in education for 10 years, but found herself unable to advance in the field without a higher degree. Now taking night classes in special education, she hopes that Beit Berl will eventually offer a master’s program for Haredi students.

The program “didn’t make me a teacher,” she said. But, it “opened a window to allow me to advance.”

Eti Nagar, another student in the special education program and a mother of four, is a teacher at a national religious school. Her husband checked out the program on her behalf, and was convinced by Feder to allow her to enroll. Though the program has entailed sacrifices for the family — especially since her husband doesn’t work but spends his days studying Jewish holy books —Nagar, 33, said the school has been accommodating.

Both women believed that the program would help them transition into higher-paying roles with more responsibility.

“We will be snapped up as soon as we graduate,” Leitman said.

Reforming Ultra-Orthodox Education — One Teacher at a Time