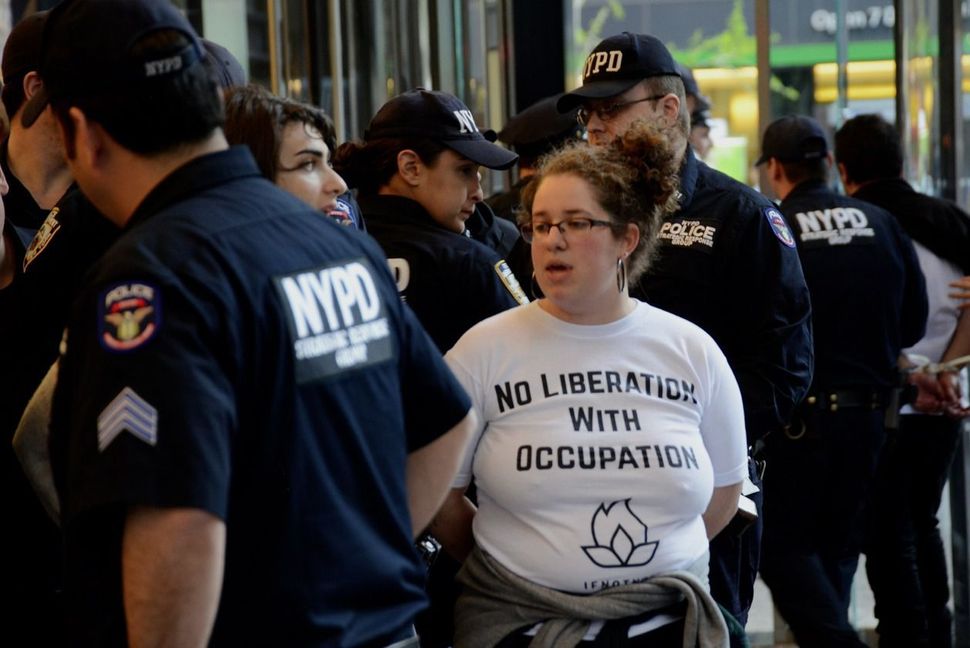 Police arrested 17 activists denouncing the “Jewish establishment’s support of the occupation of Palestine” on April 20 in the lobby of the Anti-Defamation League during one of a series of Passover protests organized by anti-occupation group If Not Now.

Before they were cuffed and shuffled into New York Police Department vans, the young activists had sat cross-legged on the lobby floor, leading a larger crowd in their version of a Passover Seder.

They banged on the floor, danced in circles and sang familiar Hebrew songs. The Seder’s ten plagues included “subjecting Palestinians to daily humiliation” and “destroying the Palestinian economy.” A hand-drawn cardboard Seder plate rested next to a sculpted tinfoil goblet, reserved for Elijah. 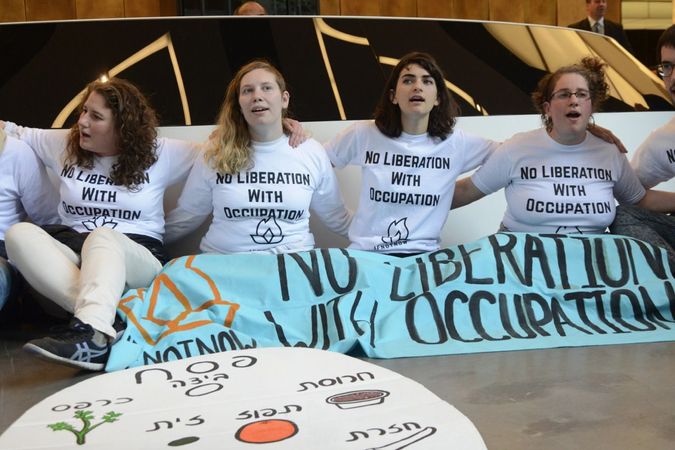 “We act now to build a Jewish community that recognizes that we cannot be free absent the freedom for Palestinians,” the text of one handout read.

Passersby paused, snapping photos on their cameras, to take in the unusual scene — around 100 Jewish activists singing and dancing in the glass-walled lobby of a midtown office. One young woman turned to the assembled crowd as she was led away by police, so that her shirt was in full view. “No liberation with occupation,” it read.

If Not Now, which formed two years ago to protest the 2014 Israel-Gaza conflict and Israel’s military occupation of the West Bank, staged several other Passover-themed events this week.

Six were arrested in Boston, where they rallied outside the American Israel Public Affairs Committee. In Washington D.C., activists gathered outside Hillel.

But the New York protest took on another layer of significance as one prominent New York activist has been at the center of national controversy.

Simone Zimmerman, an If Not Now co-founder, made headlines last week when she was named Jewish outreach coordinator for Bernie Sanders’ campaign. Her peers celebrated. But, just days later, she was suspended from that position after an old Facebook post resurfaced, in which Zimmerman had used profanity and insulted Israeli Prime Minister Benjamin Netanyahu.

“She is entitled to say what she wants, but there is something bizarre about making her the liaison for the Jewish community,” Foxman said in a Wednesday interview with the Forward. “Either she wasn’t vetted — or worse, she was.”

Foxman said he took issue with Zimmerman’s criticism of Israel during the 2014 Gaza conflict. Her comments “go to the essence of questioning and challenging Israel’s credibility.”

Foxman declined to comment about the 17 activists’ arrest, deferring to the ADL.

“ADL had no role whatsoever in the arrest of the protesters,” Jonathan A. Greenblatt, ADL’s CEO stressed in a Thursday statement. “The protesters trespassed in the lobby of a private office building in which ADL happens to be one of dozens of tenants.”

“ADL and [If Not Now] … share the same goal,” Greenblatt continued, “a two-state solution that provides for the safety and security of Israel and a viable Palestinian state.”

If Not Now, however, has not taken any specific position on a two-state solution, nor the boycott, divestment and sanctions movement against Israel — another divisive topic in the Jewish establishment.

“It is unfortunate that [If Not Now] seems to be more interested in spectacles and ultimatums than in discussion and dialogue grappling with the difficult issues involved in achieving peace,” Greenblatt said. “Nevertheless, our doors are open, and our invitation to speak with [If Not Now] still stands.”

Zimmerman stood in the background at Wednesday’s protest. She declined to speak with the Forward, but her friends rallied around her, posing for photos and intoning her name during the rally.

“Simone speaks for my kind of Judaism,” said Gabrielle Egan, an If Not Now activist from Canada.

If Not Now first took shape online in 2014, as a rallying hash tag on social media during the latest Israel-Gaza conflict. Many participants had been involved in J Street, but had become dissatisfied with that organization’s position on the conflict. Several activists describe their involvement with If Not Now as a sort of Jewish homecoming.

“These are people who grew up in a post-peace process environment,” said Peter Beinart, a mentor to Zimmerman and a leading voice in liberal Zionism. “If you look at If Not Now, there is a deep alienation, a dissatisfaction with the Jewish community’s lack of discussion.”