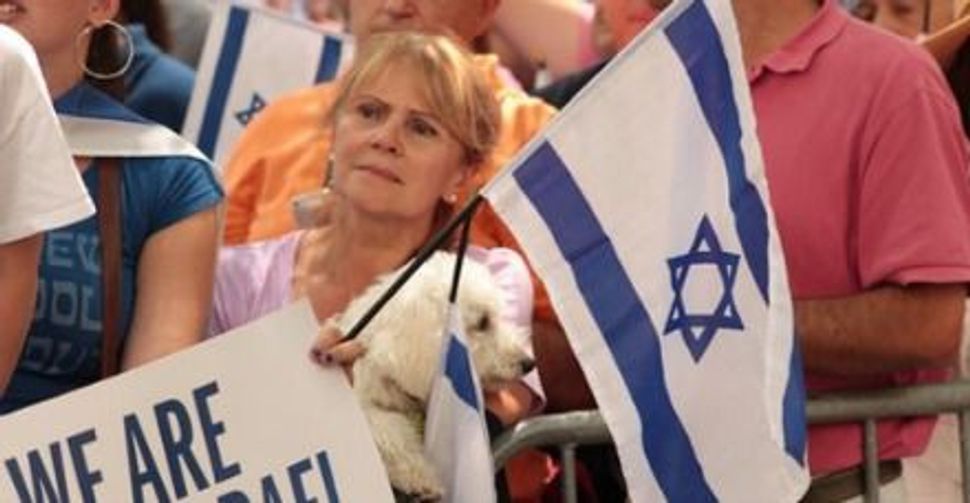 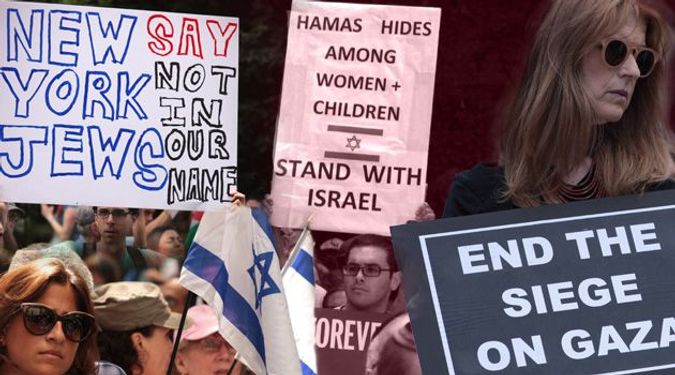 On a different day, Max Segall and Simone Zimmerman might have been protesting together for some other cause. Both are young, liberal American Jews educated by religious day schools. Both advocate progressive causes.

But on July 29, Segall, a junior at New York University, showed up to support Israel at a big rally in New York organized by several establishment Jewish communal organizations; just blocks away, Zimmerman, a 23-year-old community organizer, orchestrated an act of civil disobedience against Israel’s military operation in Gaza.

The events are the latest in a series of opposing rallies and protests that have drawn Jews on both sides since Israel initiated military action against Hamas, which rules Gaza.

Segall, a graduate of a liberal Orthodox Israeli yeshiva who considers himself a “big supporter” of Israel, came to the pro-Israel rally to show solidarity as the Jewish state endures criticism of its Gaza operation, in which more than 1,300 Palestinians — an estimated 70% of them civilians — have died and thousands have been wounded.

Zimmerman, a Conservative Jew active in J Street U while at the University of California, Berkeley, felt compelled to organize a demonstration to protest the human and political toll. “I care about the future of the Jewish people and know that our liberation cannot and should not take place upon the backs of another nation,” she said. “I have an obligation to call my community to responsibility in a moment like this.”

Roughly 1,000 people previously marched through Lower Manhattan against Israel’s military action as part of a “national day of action” on July 24, and another 3,000 marched through Times Square the next day.

Zimmerman and others staged their July 29 protest outside the Midtown offices of the Conference of President of Major American Jewish Organizations, an establishment umbrella group devoted to backing Israel. Some 70 young Jews there demanded an end to the Gaza conflict and Israel’s occupation of Palestinian territories, including its blockade, with Egypt, of Gaza. The demonstrators decried the deaths of Israelis in the conflict, as well, but skewered the organized Jewish community’s uncritical support for the war. Nine were arrested when they staged a sit-in in the lobby of the Presidents Conference’s building.

The pro-Israel rally was organized by UJA-Federation of New York, the Jewish Community Relations Council of New York and other groups, and had the backing of nearly the entire organized Jewish community, including the Reform, Conservative and Orthodox movements. A crowd estimated at close to 10,000 people, including numerous politicians, attended the rally, dwarfing the protests against Israel’s operation.

The pro-Israel rally’s backers decried hundreds of rockets launched by Hamas into Israel, sending whole towns scampering into bomb shelters. Almost all the missiles were either blocked by a high-tech air defense system or fell on empty ground, leaving three civilian fatalities so far. Since invading Gaza, Israeli military forces have also targeted an underground network of tunnels dug by Hamas to enable them to infiltrate militants into Israel.

At the protest outside the Presidents Conference, participants sharply criticized major Jewish organizations’ unwavering support for Israel. “I’m here because I feel the American Jewish establishment doesn’t speak for me in its unified support of Israel’s action,” said Emily Unger, a young yarmulke-clad activist.

Unger is no stranger to protesting major Jewish groups; in 2012, she co-founded Open Hillel, a controversial group that opposes the Hillel campus organization’s refusal to permit affiliates to host events with speakers deemed to be anti-Israel.

Unger, who stressed she was not representing Open Hillel at the protest, considers herself a “non-Zionist.” She called Israel’s invasion of Gaza “counterproductive” and “preventable.”

“I’m hoping the country and the world will see that Jews are not united,” she said.

Shortly after the end of the protest attended by Unger, thousands of people converged on Dag Hammarskjold Plaza near the United Nations for the pro-Israel rally: businesspeople on lunch break, retirees and kids bused in from Jewish summer camps. People waving — or wearing — Israeli flags stood amid signs that read “Hamas=Al-Qaeda,” “NY ♥ Israel” and “Less Hamas, More Hummus.”

While attendees sweated in the midday heat, waiting for the speeches to begin, a trumpeter in the crowd played an impromptu rendition of “Hatikvah,” Israel’s national anthem.

Israeli U.N. ambassador Ron Prosor later addressed the crowd, along with several American politicians, including New York Senator Charles Schumer and Rep. Steve Israel. The Long Island Democrat condemned the U.N.’s Human Rights Council for launching an investigation into “war crimes” in the Gaza campaign in a resolution that cited Israel but not Hamas.

“We all regret; we all weep for those who were lost,” Schumer said. “But let us not forget, one word describes why there are so many innocents who died: Hamas.”

One speaker, however, presented his own definition of “Gazan civilians.” Rabbi David Seth-Kirshner, a leader of the New York Board of Rabbis, declared, to applause from the crowd, that Palestinians who had voted in a 2006 election for Hamas were “complicit” with the group and “not a civilian casualty.”

Like many attendees interviewed, Segall praised Israel for attempting to limit civilian casualties. In contrast, he said, Hamas was using civilians as shields to protect its fighters and weapons.

At the earlier demonstration across town, protesters rejected the idea that Hamas rocket fire justified Israel’s military campaign. Kenan Jaffe, a 30-year-old high school teacher who said he “lives and breathes this issue,” described this rationale as “bunk.”

“Even if you ignore the occupation, we know… that Israel was very much a party to escalation [of the military operation] for its own political ends,” he said.

Jaffe said the escalating violence spurred him to help organize the protest. “These past few weeks have been hard emotionally, thinking about people in Israel and Palestine trapped in the pit of misery we’ve created in Gaza,” Jaffe said. “The need to do something is very powerful.”

Organizers emphasized they wanted to find a Jewish way to protest the war. Dressed in black, the activists lit yahrzeit candles, sang Hebrew songs about peace, read the names of those killed and said Kaddish, a memorial prayer, for Israelis and Palestinians who had died in recent days.

The Jewish nature of the protest appealed to Sasha Gayle-Schneider, a Smith College junior who feels “love for Israel” along with “an imperative to make sure that it commits just actions.”

“There are very few actions happening that I feel I can support wholeheartedly,” she said, noting that “finally I feel like there was an appropriate and respectful action I could take that is aligned with…my own [values].”

Four days earlier he joined the anti-Israel march in Lower Manhattan that was organized by several groups, including two Jewish ones opposed to the operation, but he quickly grew disillusioned.

“They’re calling [the operation] a genocide,” he told the Forward at the time, noting that some marchers also called for boycotting Israel. “It’s essentially an anti-Israel protest, and I’m not anti-Israel in general, I just oppose most of the government’s policies,”

After glimpsing a sign that read “Israel=KKK,” Shulman quit that march in frustration.

“Thursday kind of felt like the Internet, the way everybody was yelling and screaming,” he said at the Presidents Conference protest, referring to the July 24 anti-Israel march. But in contrast, he said, “This [protest] felt like uniting over the basic principles that should be uniting all of us. This is more like it!”

Jews interviewed at the pro-Israel rally generally viewed Jews opposing the operation as entitled to their opinion, however much they disagreed with it.

“I think it’s beautiful that we have a society in which people can peacefully disagree,” said Elie Himmelfarb, a 29-year-old Modern Orthodox attendee. “I don’t agree that Israel is in the wrong, [but] I think we all have to reserve the right to criticize Israel when it’s doing something we deem wrong.”

But Amichai Lau-Lavie, a rabbi and Israeli native, reported some harsh responses when he and several rabbinic colleagues showed up at the pro-Israel rally with what he called “nuanced” signs. “No More Dead,” one read. Another declared, “Stand With Israel, Mourn With Gaza, Cease the Fire, Seize the Peace.”

Lau-Lavie, who is the nephew of Israel’s former chief rabbi, Yisrael Meir Lau, and the son of a former Israeli consul general, said he wanted to show that “we can stand with Israel and show complete empathy and compassion to the wounded and slain on the other side.”

But after seeing the signs, Lau-Lavie said, some attendees became “verbally abusive” and tried to rip the placards, “I was told to go die in Gaza, to die in the gas chambers,” he said.

When a woman called him a mamzer, a bastard, Lau-Lavie asked her to show respect to his father, a Holocaust survivor. “He should have died so you would not have been born,” the woman responded, according to Lau-Lavie.

Organizers of the protest against Israel’s military action dubbed their group with the hashtag #IfNotNow, framing their demands through the teaching of the Jewish sage Hillel: “If I am not for myself, who will be for me? But if I am only for myself, who am I? And if not now, when?”

But they had no monopoly that day on Hillel’s maxim.

At the rally to support Israel, a reporter asked Charles Savenor, a Conservative rabbi, whether one could be Jewish and yet not support the Jewish state.