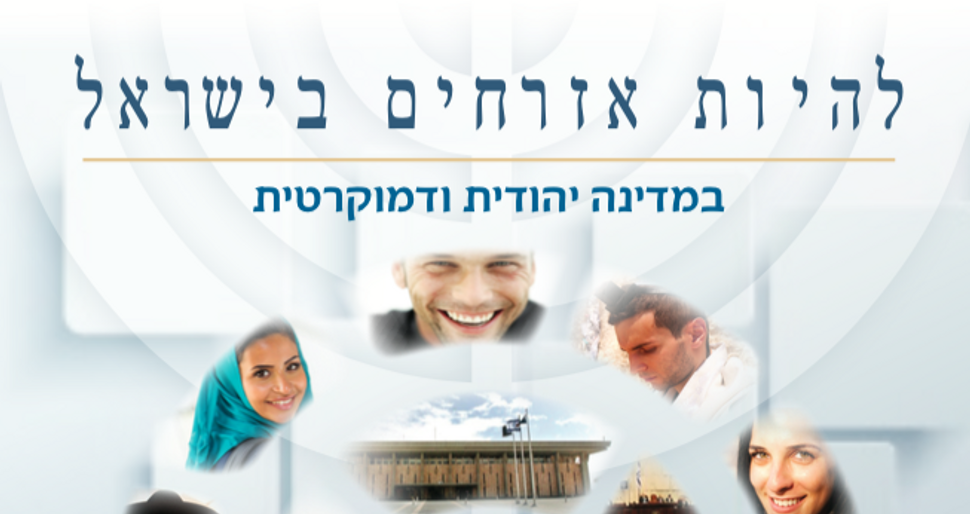 Image by Israeli Ministry of Education

Usually, the mere mention of high school civics class is enough to make eyes glaze over. Yet the release of a new textbook that critics — including some of the book’s own authors — are calling deeply ideological has put civics instruction at the center of a massive controversy in Israel.

Revital Amiram, a political scientist who helped write the book, called it a “textbook about the history of nationalism and the Jewish people” aimed on “finishing off the idea of Palestinian nationality” in an opinion piece in Israel’s Maariv newspaper. She was one of three writers who removed their names from certain chapters. Arab leaders in Israel said that they would be preparing alternative material to teach to middle and high school students.

The book’s critics are saying that the new tome advances a right-wing, religious vision of Israel and its society at the expense of a broader narrative about Israeli diversity and its struggles. And they are concerned that it will give Israeli adolescents a biased education.

“The students will learn that instead of government by the people (majority and minority) in which the state is committed to protect human rights and minorities, that democracy means the rule of the majority and the majority can harm the rights of groups and individual rights for the sake of national interest,” said Ricki Tessler, a civics education expert, in an interview with Maariv.

The Ministry of Education made public the 500-page textbook, called “To Be Citizens in Israel: A Jewish and Democratic State,” just ahead of Memorial and Independence days.

Amiram called the timing of the release suspect. “When Israeli society is deep in bereavement, that is a good time to lower to the minimum the chances of awakening a public tempest and criticism,” she wrote in Maariv.

The new textbook is actually an updated version of one that came under intense public scrutiny in January, when the book’s language editor, Yehuda Yaari, complained about what he claimed was the book’s “hostile takeover” of the civics curriculum by framing in religious terms subjects that are “universal and liberal.”

His letter to several Ministry of Education officials, which was reported by Channel 2 and obtained by Haaretz, said that the section on human rights quotes 20 religious sources for describing values like liberty and equality. “Is this a class on civics or the Talmud?” he wrote.

He also contended that the book gave a lengthier description to Orthodox Judaism than to secularism, and that it described Jewish settlements in the West Bank as an expression of Jewish connection to the land without mentioning the controversy surrounding them, among other concerns.

One of Yaari’s main concerns was that the sinking of the Altalena, when the Israel Defense Forces downed a ship belonging to the pre-state Irgun militia, was described alongside the murder of Yitzhak Rabin at the hands of a Jewish extremist as an example of political violence. According to The Jerusalem Post, Yaari contended that the comparison blurred “the lines between murder for political-ideological reasons and orders given by a government head.”

Yaari also objected to the early draft’s description of most of the knife attacks in the most recent Palestinian uprising as conducted by Arab citizens of the state, calling it a factual inaccuracy. (Most have been committed by East Jerusalem and West Bank Palestinians.)

In response, the Education Ministry said that Yaari’s selections were “tendentious and selective, and absolutely don’t reflect the book’s spirit,” and actually were taken from an out-of-date draft of the book, Haaretz said. Education Ministry spokesman Amos Shavit also accused Yaari of lodging his complaint for political reasons, using a Facebook post he shared from the controversial group Breaking the Silence as evidence.

According to Maariv, the Altalena comparison and the allegation of Arab-Israeli violence have been removed in the just-released textbook.

The gay and lesbian community in Israel also panned the book for mentioning its struggle only once, in the context of the murder of 16-year-old Shira Banki at the Jerusalem Gay Pride Parade at the hands of an ultra-Orthodox extremist last year. Her murder was framed as a result of violence over religious divisions rather than as a hate crime, according to the Walla news site.

Yael Guron, supervisor of civic studies in the Education Ministry, penned a Haaretz column to explain, if not outright defend, the new civics book. She said it was meant primarily as a teaching tool, and that Israeli teachers should flesh out the topics in their classrooms.

The book is “not perfect,” she said, but it deals with Israel’s “profound questions” in an “excellent fashion.”

“If we examine the new book through this prism, as a tool to serve the teacher to make the picture of civic life in Israel accessible to young people, with its rainbow of colors and voices — then the book passes this test with great success,” she wrote.