The Fight to Save the ‘Ellis Island of Israel’ 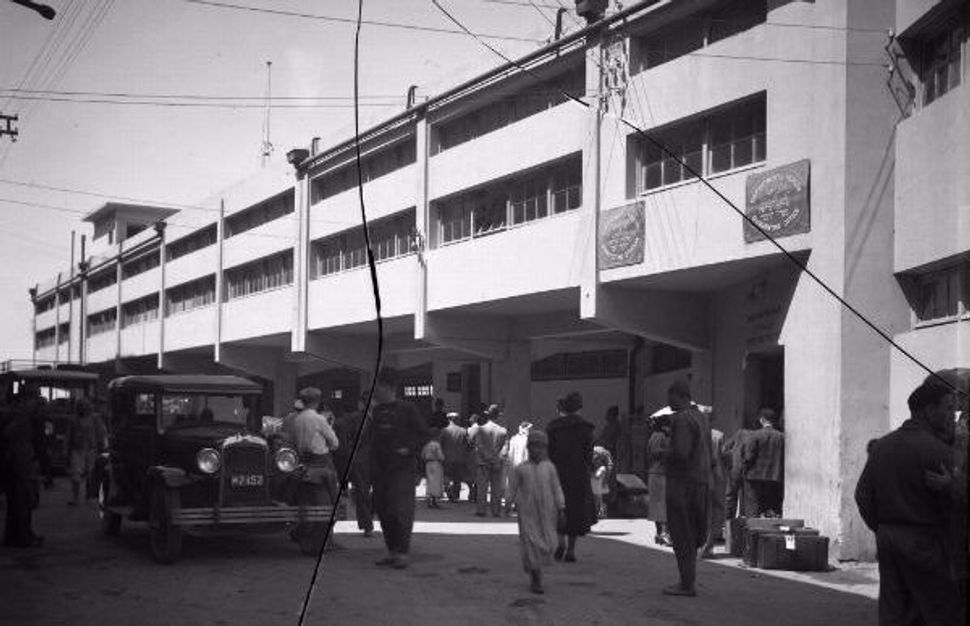 The passenger terminal building in 1933. Image by Harvard University Library

Jaffa – In 1932, a German Jewish judge named Kurte Tuchler traveled to British Mandate Palestine as an emissary of the German Zionist movement. After landing in the Jaffa port, he entered the new terminal building, erected the year before as the gateway for the thousands of Jewish immigrants who would make their way to the Holy Land.

Kurte Tuchler was “very proud of this building,” which he saw as a symbol of the future Jewish state, said his grand-niece, Tamar Tuchler. He snapped a blurry photograph of it from the sea. Today, that building is under threat of demolition by the Tel Aviv municipality and Tamar Tuchler, the Tel Aviv director for the Council for Conservation of Heritage Sites in Israel, is at the head of a campaign to save it. Her great uncle’s black and white photograph appears in the campaign material.

Tamar Tuchler wants to turn the building into Israel’s first-ever museum of immigration, akin to the Ellis Island Immigration Museum. There, visitors will be able to learn about the broad sweep of immigration to the Holy Land, from biblical times until today. They will also be able to research their family history in a computer database.

To the average passerby, the building, located on the northern end of the Jaffa port, might look like typical Tel Aviv blight. Coated in grey concrete and splattered with Hebrew graffiti, it is a stark contrast to the stone Ottoman, Crusader and Mamluk-era buildings nearby. With its doors padlocked shut, almost its only visitors are the pigeons that fly in and out of rusted window frames. But preservationists say its appearance belies its rich history.

“This is part of the heritage of the country,” said Tamar Tuchler. “You can see it as part of the narrative of so many things that happened in Israel.”

Kurte Tuchler ended up permanently relocating to Mandate Palestine with his wife in 1936, and later went on to help found the Tel Aviv Stock Exchange. Other family members came as well, including his brother and sister-in-law, Tamar Tuchler’s grandparents, who conceived her father in a ship that had docked off of the port of Jaffa, according to family lore.

That port, which features so prominently in Tamar Tuchler’s family history, is also her passion. She was part of a group of activists in the 1990s who saved the Jaffa port, then under state control, from being privatized and turned into a neighborhood of high-end condominiums. Thereafter, the state handed the Jaffa port to the Tel Aviv municipality, which transformed it into a bustling tourist destination, with art galleries, restaurants and a food market in a converted hangar. 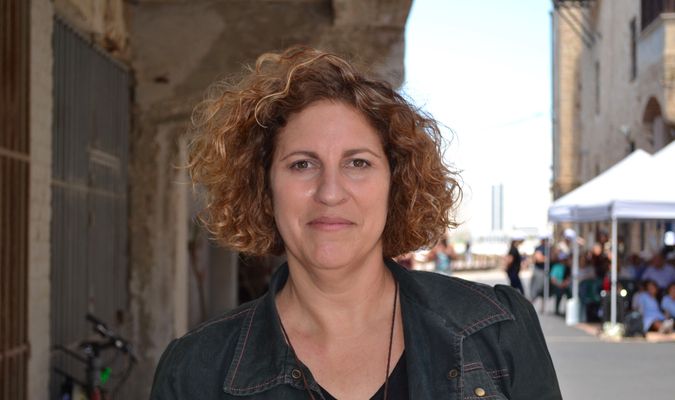 Tamar Tuchler is at the head of a campaign to save the historic building from demolition. Image by Naomi Zeveloff

Having saved the port, she’s now determined to do the same for the terminal. The city says that the building, which obscures the view of the Tel Aviv coastline from the Jaffa boardwalk, does not have a place in its vision for the area. Nor does it see the value in creating an immigration museum in the building, which operated as a terminal for less than two decades. Now, it is up to a state planning authority to decide whether the building, which Tamar Tuchler said is protected by two conservation regulations, should remain standing.

The city says it shouldn’t: “I wouldn’t agree about the fact that it was a key part in the immigration history of Israel or Tel Aviv,” said Jeremie Hoffman, the head of the conversation department with the Tel Aviv municipality. “There are much more important key parts in that history, and I think we should preserve them and not every building that served that purpose for a very short time.”

The battle over the terminal building is the latest chapter — if a short one — in Jaffa’s 4,000 year history. The port appears in Egyptian lore, the biblical story of Jonah and also in Greek mythology, as the site where the princess Andromeda was tied to a rock in sacrifice to a sea monster before she was saved by Perseus. Tour guides point out what they believe is the so-called Andromeda stone, now planted with an Israeli flag, just off the coast. Napoleon came to the port, as did the American writer Mark Twain. Countless Christian and Muslim pilgrims used it as their entry point to Jerusalem.

In 1886, when the territory was under Ottoman control, Turkish authorities built a customs house in the northern section to accommodate Christian and Muslim pilgrims to Jerusalem. Twelve years later, Theodore Herzl, the founder of the Zionist movement, would make his trip to Ottoman Palestine, arriving through Jaffa. (It’s unclear if Herzl came through the customs house, or used a ramp built for the German Kaiser Wilhelm, with whom Herzl met on his visit.)

In 1931, the passenger terminal building replaced the old Ottoman building as the major way station for European Jews in the British Mandate period. According to Samuel Giler, an architect and amateur historian of the Jaffa port, the building was built specifically to accommodate Jewish immigrants after Zionist leaders pressured British officials to create a building more suitable for the growing traffic.

The building was the primary immigration way station during the fifth Aliyah between 1933 and 1936, when up to 300,000 Jews arrived in Palestine fleeing European persecution. All the grandparents or parents who entered Israel in the 1930s came through the building, Giler said.

After travelers disembarked from ships near the Jaffa port, they took smaller boats to land and then entered the terminal building to get their passports and luggage checked by British authorities, to have a medical examination and to be sprayed with insecticide. Then they were handed over to the Jewish Agency which facilitated their new lives in what would later become the state of Israel. 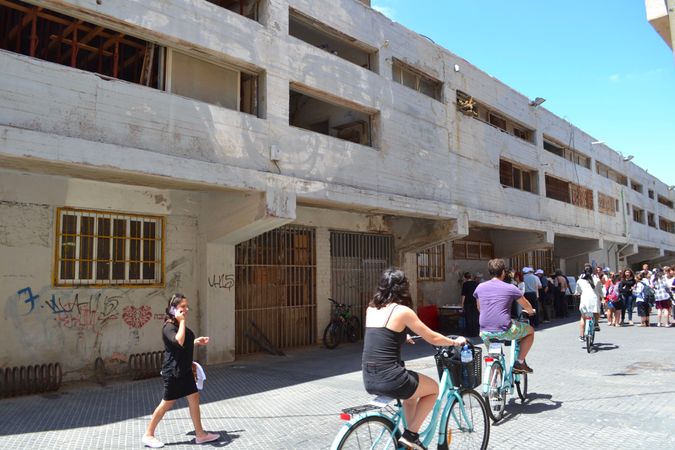 “People say this is an ugly building,” said Tamar Tuchler on a tour of the harbor in May. “But in the sixties they tried to demolish all of Jaffa because they thought it was ugly. And in the eighties they demolished many of the Bauhaus buildings in Tel Aviv because they were ugly. It is a matter of culture, and not a taste question. You cannot judge a building by the bad situation it is in.”

Yona Calderon’s parents passed through the building in 1935, when her mother and father emigrated from Poland to British Mandate Palestine for religious and ideological reasons. Calderon’s mother was pregnant with her older sister at the time, and she told Calderon that she was nervous about disembarking from the ship into the small Palestinian fishing boat that had been sent to fetch the new immigrants. Once on dry land, the couple stitched together a life in Mandate Palestine, eventually opening up a kiosk for soft drinks and snacks in Tel Aviv.

The building remained in heavy use until 1936, when Palestinian riots erupted in fear of a Jewish takeover of Mandate Palestine. The uprising, which took place in Jaffa as well as other cities, made it a dangerous area for Jewish immigrants to land. Jewish immigration was shifted to the nearby Tel Aviv port, and also to Haifa, in the north. “I don’t say that it stopped completely in Jaffa,” said Giler, “but it was reduced dramatically.”

According to Giler, the building stopped operating as a terminal in 1948. In the ensuing years, it housed a radio station for communication with fishing boats and also became the headquarters of the sea scouts, part of the Israeli national youth movement. While the main floors of the building are closed to the public, the sea scouts occupy a small warehouse on the first floor. Their yellow boats can be spotted zipping throughout the harbor.

Indeed, even after the Calderon family settled in Tel Aviv, the terminal building continued to play a role in the life of the family, when her children became sea scouts. Now 78 and the grandmother to 20 children and a great-grandmother to 13 more, Calderon said her family “grew up around that building.”

“It’s very painful,” she said at the prospect of it being torn down.

Despite Israel’s immigrant history, there is no major museum about immigration to the country, save for the Clandestine Immigration and Naval Museum in Haifa, which tells the story of illegal immigration to Israel during the British Mandate period, and a small museum about the first Aliya in Zichron Yaakov, near Haifa. The museum that Tamar Tuchler and the other preservationists hope to open — which they call the Gate to Israel — will remedy that, and, much like Ellis island, it will also serve as a research institution for Israeli families looking for information about their immigrant heritage. The preservationists have also found inspiration in Antwerp’s Red Star Line museum. Housed in the former shipping sheds, the museum tells the story of 1800s European immigration to North America.

Dubi Niv, a 62-year-old retired engineer, said that his mother immigrated from Romania to Israel at age 13 in 1930, likely through the old Ottoman building in the Jaffa Port. He knows very little of his mother’s immigration story, save for the fact that her parents likely sensed growing anti-Semitism and decided to take a chance on Mandate Palestine. His mother’s family settled in South Tel Aviv, and she worked in a bank until she met her husband, an immigrant from what is now Belarus. Niv’s father had come as a “pioneer” to Hadera, a town near Haifa, Niv said, and tried to convince his parents to follow suit. But they could not be persuaded, and died in the Holocaust. Niv and his younger brother were raised in Tel Aviv.

On a Saturday night in early June, a group of activists stood outside the building to convince passersby to join in their effort to save the terminal. On the wall of the building they looped a short video, set to dramatic music, of the preservationists pleading their case. One woman stood with a clipboard and pen, asking people for signatures to send to the mayor.

Soon, a couple of policeman walked over and asked if the group had a permit to stage its event. Seffi Smadga, one of the volunteers, explained that they didn’t need one since they were less than 50 people gathering. After the police left, Smadga lit a cigarette. She said that she used to live in the terminal building, in a commune, when she worked for the sea scouts.

“Nobody knows what was here,” she said, looking up at the hulking concrete structure. “They want to take down this building. I believe we have to leave something for our children.”

The Fight to Save the ‘Ellis Island of Israel’