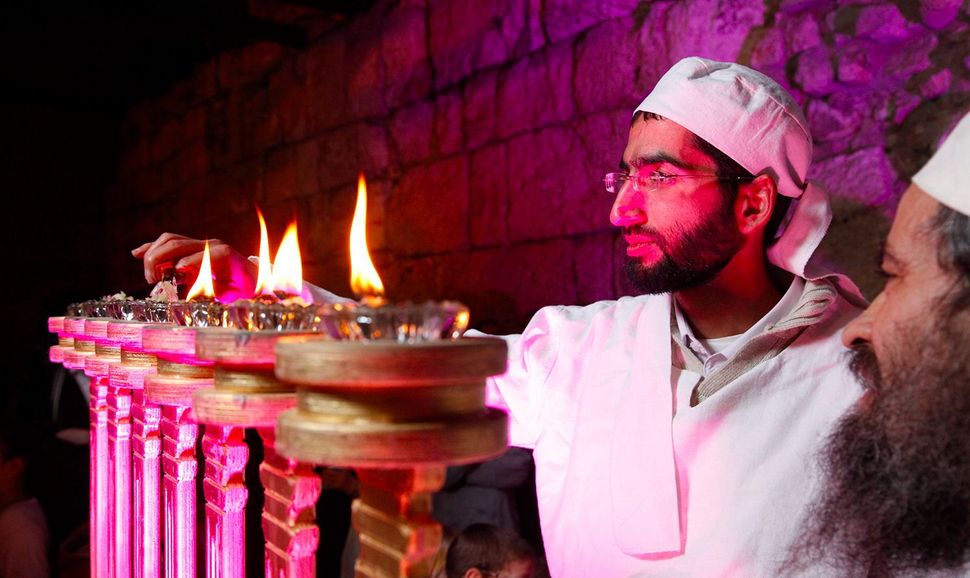 A member of the priestly Kohanic tribe lights a menorah. Image by Temple Institute

A Jerusalem group plans to open the first school of its kind to train priests to serve in a third Jewish temple, which they hope to see erected on Jerusalem’s most contested holy site.

The Temple Institute’s priest training program is the group’s latest effort to prepare for and hasten the creation of a third Jewish temple. To that end the group has also recreated more than 70 “sacred vessels” and garments for the high priest, to Jewish legal specifications, which are on display in its Jerusalem headquarters in the Old City.

“The logical step is to consider what we would be doing with the Temple and who would be responsible for its services and what kinds of services,” said Chaim Richman, a rabbi and the international director of the Temple Institute.

The training program, dubbed the Nesher HaKodesh Institute for Kohanic Studies, will include classes on religious practice and also the role of modern technology in the Third Temple. It will be open to Kohanim, Jews believed to be descended from the biblical Aaron, the brother of Moses. Today, there are 14 students in a pilot program, which the Temple Institute hopes to expand to accommodate several dozen. According to Richman, in the time of the Second Temple there were “thousands” of priests who fulfilled religious duties in the Temple. “It is similar to military reserve duty,” he said.

Founded in 1987, the Temple Institute aims to fulfill the Jewish biblical commandment to rebuild the Jewish temple on the grounds where it once stood, now the site of Islam’s second holiest site, the Al Aqsa Mosque. To Jewish believers, this was the spot where Abraham nearly sacrificed his son Isaac at god’s command, and where two previous Jewish temples stood. To Muslims believers, this same site was where Islam’s Prophet Muhammad ascended to heaven on a white steed.

Israel captured the site, known to Jews as the Temple Mount and to Muslims as the Noble Sanctuary, from Jordan in the 1967 War. In order to avoid inflaming religious tensions, Israel allowed Jordanian Muslim authorities to administer the site, as they had done for generations. Today, Jews may ascend the site, but they are not allowed to pray there, a rule that the Temple Institute challenges. The Jewish prayer movement at the site has gained major traction in recent years, and now has a new champion in the Israeli government in Knesset Member Yehuda Glick.

Ir Amim, a group advocating for a more equitable Jerusalem for Jews and Palestinians, has named Temple Institute as one of several groups that threaten the delicate status quo at the site. Palestinian fears of a Jewish takeover of Al Aqsa helped to fuel the violent spate of knife attacks against Israelis since last October.

The Temple Institute is raising $75,000 for its priest training program on the social fundraising site Indiegogo. So far, 29 people have donated just over $1,000.