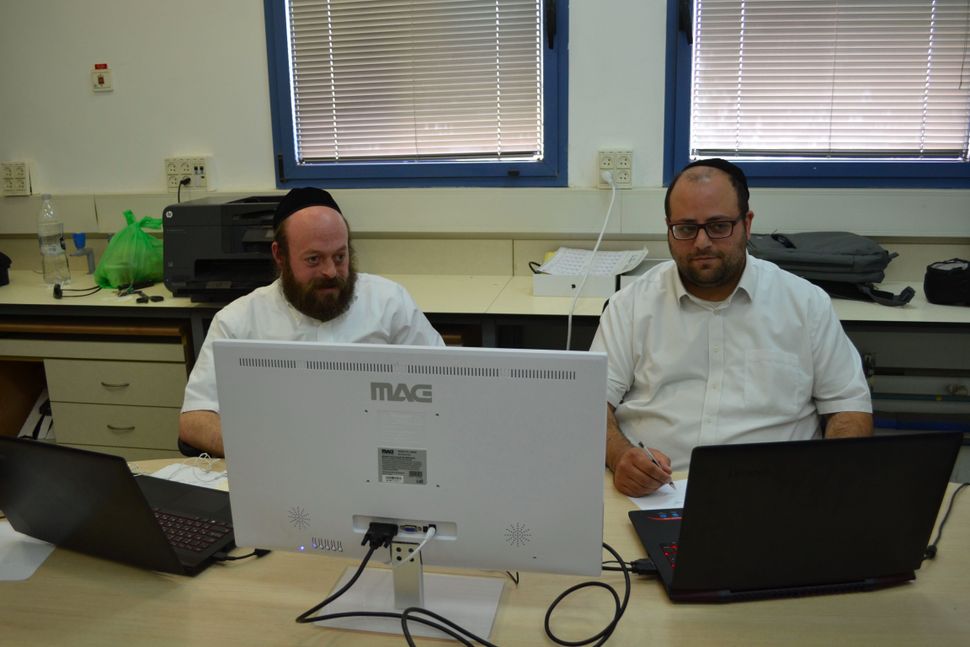 Avreimi Wingut uses what is known in the ultra-Orthodox world as a “kosher” cell phone, without access to YouTube or Facebook. But as the co-founder of Kama Tech, an Israeli organization supporting Haredim in Israel’s high tech workforce, he hopes to see more religious Jews working in companies like these.

There’s no contradiction there, he maintains. Writing code for a social media company is work, but using social media is “fun” and runs afoul of the ultra-Orthodox admonition to keep the secular world at bay.

In fact, Wingut, a 25-year-old father of three from the ultra-Orthodox neighborhood Bnei Brak, believes that extremely religious Jews are particularly well suited to it working in tech, even though almost none of them grow up with computers.

Gesturing at a Powerpoint photograph of young Haredi men studying Jewish texts, he said, “People you see in this picture sit and study Torah (but) what they do is solve problems. Their main goal is to solve riddles. That’s why entrepreneurship in the high tech sector is the most relevant and fitting thing for the Haredi community. You are solving problems all day.”

The assertion that Haredim make better high tech workers than other Israelis is bound to raise some eyebrows. Whether it’s true or not, many in Israel see high tech jobs for Haredim as a way to lift Israel’s fast-growing ultra-Orthodox population out of poverty. With a focus on Jewish learning instead of gainful employment in their communities, only half of all Haredi men in Israel are part of the labor force. The picture looks better for Haredi women with a 71% employment rate, but they tend to work menial and low-paid jobs.

The situation is “clearly not sustainable,” said Stuart Hershkowitz, the deputy CEO of the Lev Academic Center at the Jerusalem College of Technology, or JCT.

JCT has made it its mission to train Haredi men and women to work in the high tech sector with programs in software development and computer engineering. Hershkowitz maintains that tech skills are easier to learn than other kinds of expertise and they pay off much faster in Israel’s growing, lucrative high tech sector. JCT had 1,987 Haredi students in the 2015-2016 school year. Most of the male students studied engineering, and the most popular women’s majors were engineering and business administration.

The school is still controversial in the ultra-Orthodox communities it seeks to target. For instance, Haredi newspapers don’t allow JCT to advertise in their pages. But Hershkowitz says that there is a “large social conversation” on Haredi social networks, which has drum up excitement about the high tech prep program.

In order to bring more ultra-Orthodox into JCT, the school has had to play by their rules to some extent. Male and female students are separated, and males are only taught by other male teachers. (Women are taught by both women and men.) The school also has a kosher kitchen. Gender segregation in academic settings and beyond to accommodate Haredim is a cause of concern for many secular Israelis, who worry about creeping religiosity in the public sphere. But Hershkowitz maintains that Haredim simply won’t enroll unless the school’s culture matches their own.

“The one thing you can’t do with the Haredi population is force things down their throat,” he said.

Bezalel Lenzizky, a Haredi student went on to found Wish Trip, an app that helps users create a digital interactive photo album of their vacations, said that the he felt the school accommodated his religious needs and that’s why he succeeded.

“I’m living proof that there is no contradiction between studying and continuing a religious lifestyle.”

Once Haredim are in the workforce, Hershkowitz said, they’ll be forced to interact with secular people, and men with women, and this, he believes, will help with their overall integration into mainstream Israel.

“Besides the very, very strong economic benefits of having this incredibly bright population join the work force you, have the profound social implications of them joining and integrating into Israeli society.”

Yoni Luskenberg, from Bnei Brak, is one of the few Haredi CEOs in Israel. His startup, Pojo, helps professionals build web sites. The company employs 11 people of different religious stripes, which is a point of pride for Luskenberg, who sees his company as a kind of lab for Haredi and secular coexistence.

The company is doing so well that it expects to add another employee in the coming month.