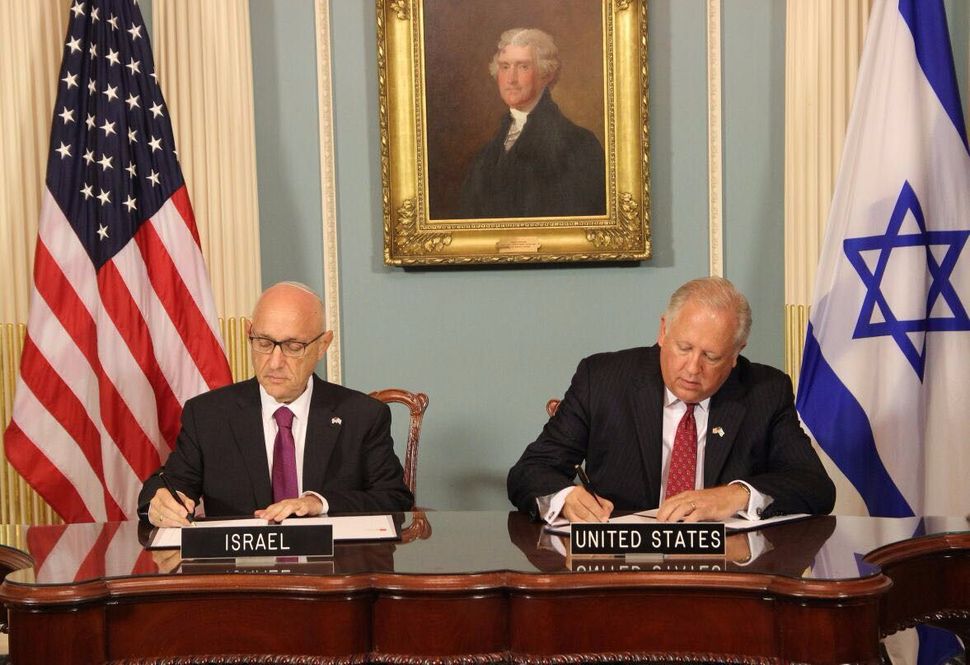 When Yaakov Nagel, Israel’s acting national security adviser, was tasked with heading the team negotiating a new 10-year military aid package with the United States, Prime Minister Netanyahu set forth the guidelines: “If you reach $3.5 billion a year, you’ll get a gold medal,” Nagel recalled Wednesday, hours before signing the agreement in Washington. “If you get $3.3 billion you’ll get a silver medal; and if you get $3.1 billion you’ll get the bronze.”

Nagel brought home something in between silver and gold, finalizing a $38 billion 10-year agreement, made up of $3.3 billion a year in military aid and another $500 million a year for missile defense systems, which was previously handled separately.

But this Olympics-style competition was more than about money. It was also about two world leaders seeking vindication.

One, in Jerusalem, wanted to disprove the notion that he harmed bilateral relations with his country’s greatest ally by picking a fight with its leader.

And the other, soon to leave the White House, was looking for the ultimate seal of approval for his support to the Jewish State. Both ended the race legitimately claiming victory.

“This deal illustrates a simple truth,” Israel’s Benjamin Netanyahu said in a video message hours after the agreement was signed. “The relationship between Israel and the United States is solid and powerful. It does not mean that we don’t have disputes now and then, but these are disputes you have between family.”

“This is the single largest pledge of military assistance to any country in U.S. history,” Rice said. “And that’s not an accident. It’s a reminder of the United States’ unshakeable commitment to Israel’s security.”

Obama and Netanyahu, reaching the final stretch of their troubled 8-year marriage, now have a document proving that years of personal tensions and deep distrust have not infected the bilateral relationship.

And just like in any Olympic competition, it took a lot of sacrifice to get to the winner’s podium.

For Netanyahu, it meant to some extent turning his back on Republicans in Congress, the Israeli leader’s willing partner in battling the Democratic administration. For Obama, reaching the finish line required bending over backwards in an effort to convince Israel to agree to accept his $38 billion gift.

At the State Department’s Treaty Room on Wednesday afternoon, it was the working-level officials’ moment in the limelight.

Israeli and American national security experts who have been engaged in three years of negotiations trying to iron out the details of the massive aid package, were all on hand to see the deal come to life. Secretary of State John Kerry popped in after the signing for a quick photo op with negotiators. Israel’s ambassador to Washington Ron Dermer, once a political lightening rod for Obama administration officials, sat in the front row, as did his American counterpart Dan Shapiro. Members of Congress from both sides of the aisle came to show their support, alongside several Jewish organizational leaders.

The deal, which will go into effect in 2019, is aimed at helping Israel deal with regional threats by using the American aid to purchase advanced U.S. defense equipment. It will replace the current 10-year $30 billion deal, which did not include the missile defense component, funded each year separately by Congress.

The new deals folds missile defense aid into the larger military assistance package, thus assuring Israel a predictable funding source for the program, but at the same time stripping Jerusalem from its ability to use Congress for extra funding beyond the agree upon amount. It also does away with a unique arrangement Israel enjoyed which allowed it to spend a quarter of the American assistance money on purchases within Israel. This benefit will be phased out gradually ending completely in the last year of the agreement.

Israel’s starting point, according to officials involved in the talks, was set at $45 billion, a sum representing Israel’s needs and hopes, rather than a realistically achievable goal. Throughout the lengthy talks, in which, according to Nagel, thousands of slides were presented and every single piece of equipment was discussed, “from the most advanced jets to the last truck,” the final subtotal began to emerge – higher than the previous deal, but less than Israel had wanted.

As negotiations entered the final stretch, it became clear that lack of trust still exists between the Obama administration and Netanyahu’s government. Republican Senator Lindsey Graham offered Israel to push in Congress an extra $300 million in aid, a move seen as unacceptable by the Obama administration which feared the reemergence of the Netanyahu-Congress nexus in attempt to bypass the president.

The administration demanded that Israel make clear it will not seek any further funding from Congress, except for special emergency needs a result of an armed conflict. Netanyahu had to promise Secretary Kerry, in writing, that Israel will adhere to this commitment, and to further commit that if Congress, on its own volition, decides to increase aid to Israel in the next two years, Israel will give back the money. According to Nagel, Netanyahu told Graham, one of his top supporters on Capitol Hill, that given the choice between getting another $300 million from Congress now and securing a deal with Obama for the next decade, he will chose the latter.

But even after having to concede to limiting Congress’s role in aid to Israel and to giving up the possibility of spending aid money in Israel, Netanyahu still had plenty reason for celebration.

Critics of the Israeli prime minister have argued that his insistence on fighting Obama on the Iranian nuclear deal rather than using the moment to leverage Israel’s bargaining power to reach a better aid deal, has cost Israel billions in military assistance. By the time Netanyahu was ready to finalize the deal, they argued, it was already clear that Congress cannot block the agreement and Israel’s position became politically irrelevant. Dermer insists this is not the case. At no point, he said, even at the height of the nuclear deal dispute, did the U.S. indicate it would be willing to be more generous in its aid offer in return for an Israeli retreat. 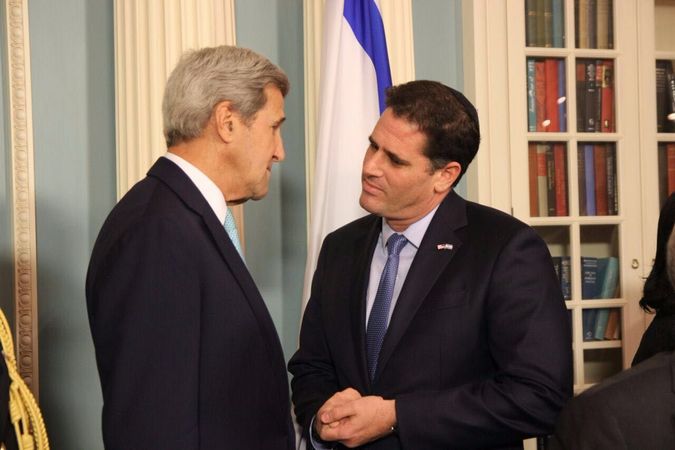 Netanyahu now gets to show his critics at home that his insistence to fight Obama on the Iranian nuclear deal did not cost Israel its future relationship with America. A $3.8 billion annual check from Uncle Sam will help embolden Netanyahu’s message, as will the symbolic fact that Dermer, the architect of Netanyahu’s 2015 Congress speech, was posing for pictures with Secretary Kerry after the signing ceremony.

Obama has also gained significantly from finalizing the deal before leaving office.

The administration made every effort to drive home the notion that the new Memorandum of Understanding represents a historic measure. Rice called it an “unprecedented commitment to the security of Israel.” Obama, in a statement, said the agreement was “just the most recent reflection of my steadfast commitment to the security of the State of Israel.” Just like Netanyahu, Obama has critics too, accusing him of being unfriendly to Israel in his years in the White House. Now, his legacy is cemented by a signed agreement and a hefty dollar amount he can use to dispel these claims.