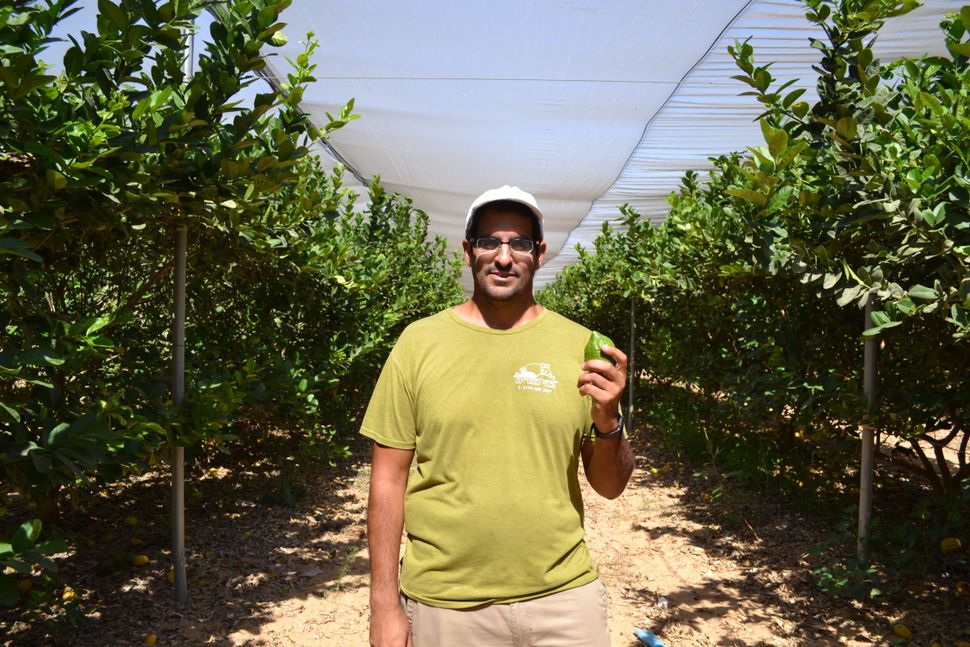 Three days before the Sukkot holiday, Yehuda Uzan plucked the final etrog fruits from his family orchard to be shipped across Israel.

The perfumed citrus is grown throughout the Holy Land for ritual purposes during the harvest festival of Sukkot. But it’s a relatively new crop in this distant corner of the Negev desert, where it is being grown by a handful of ex-settlers from the Gaza Strip.

The etrog is an economic anchor for Halutza, a community of three tiny Jewish villages sandwiched between the borders of Gaza and Egypt. About a third of the 340 families in Halutza lived in Gaza before they were evacuated by the Israeli government in 2005 along with thousands of other settlers.

A collection of single-story homes, synagogues and hothouses set against a sandy expanse, Halutza is so remote from Israel’s bustling center that residents joke that to get there one must drive “to the end of the world, take a left and keep on going.”

Farmers there say the desert creates a better etrog since the trees can easily push through the soft, sandy soil. This year, Halutza produced 50,000 of the citrus fruit to be sold in Israel and the United States in the Jewish communities of Cherry Hill, New Jersey; Boca Raton, Florida; and Los Angeles. Immaculate etrogs, known as “diamond” etrogs, can sell for as much as $400. 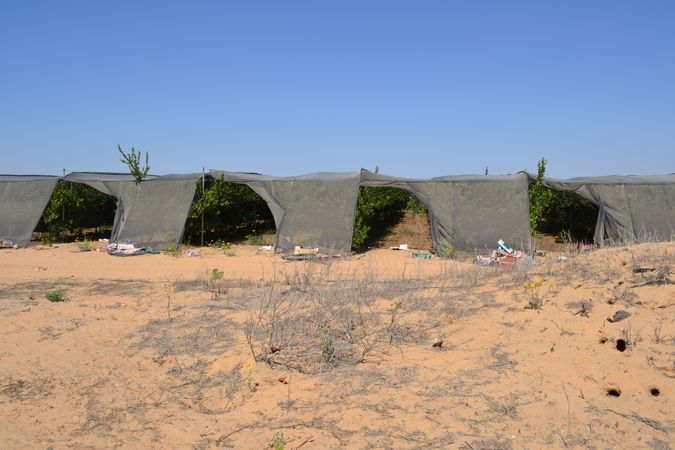 Etrog plants are grown in the sand in the Negev. Image by Naomi Zeveloff

The ex-settlers relocated to the Negev with the help of the Jewish National Fund, the non-profit organization that develops land in Israel and — controversially — the Israeli-occupied West Bank. Yedidya Harush, JNF’s Halutza liaison, said that the Negev is a “strategic place,” for Israel, since it is at the intersection of Egypt and Gaza. He said that the JNF has invested some $11 million in Halutza.

The JNF’s project to build Jewish communities in the Negev — called Blueprint Negev — has been criticized for benefiting Jews at the expense of Arabs. The JNF plans to build a forest on land that includes a Bedouin village, Al Araqeeb. While Israel calls Al Araqeeb state land, the families there say the land belongs to them. The Israeli High Court ruled in the state’s favor in 2012. Meanwhile, the Al Araqeeb families have struggled to hold onto their village, rebuilding structures there more than 100 times after the state razed them.

Harush called the Negev Bedouin “our friends.” He believes that Bedouin resettlement into towns — a prospect that human rights groups have called displacement — would be good for the area. Development of the Negev is a “national mission,” he said, and even the tiny etrog plays a role.

Of the four symbolic plants used on Sukkot — including the date palm, the myrtle and the willow — the etrog’s perfection is paramount. Uzan and his workers go to great lengths to grow the most dazzling fruit. The family owns 968 etrog trees, which grow in neat rows under white canopies, irrigated by black pipes that snake across the ground. Though some Jews make jam or liquor from the etrog when the holiday is over, Uzan’s heavy use of pesticides renders his etrogs inedible. The appearance is more important than the taste. 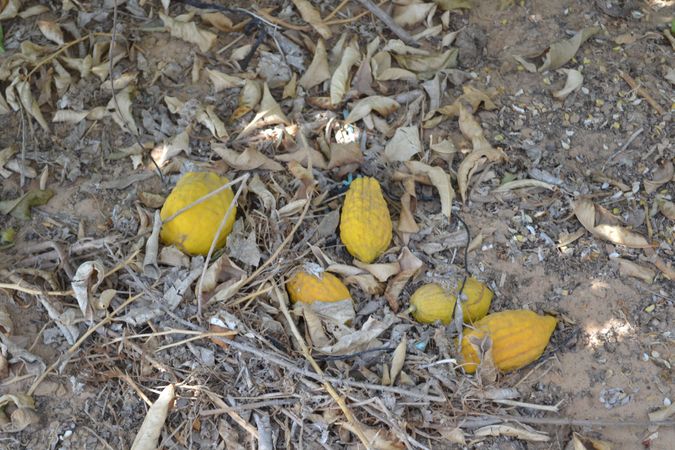 Etrogs that didn’t make the cut are thrown back to the ground to compost. Image by Naomi Zeveloff

When the trees begin to flower, around Passover and again in midsummer, Uzan pays close attention to each cluster of blossoms. As soon as a flower begins to fruit, he cuts back the other flowers in the cluster and ties the branch apart from the rest of the tree so that each etrog will grow untouched by other fruit and leaves. Even small scratches or discolorations can render the fruit unkosher for the Sukkot holiday. Some customers prefer the etrogs to come with the “pitam,” or a natural protrusion on the end, so Uzan sprays the end of the etrog with a chemical hormone to make it stay in place. But in spite of all the care, many etrogs don’t make the cut. Uzan said he threw away 60% of a recent harvest.

Uzan divides the fruit into three kosher categories — good, better and best, or mehudar — and then sends them to the packing plant. There, they are examined further, and carefully packed between pieces of foam — almost like delicate wineglasses — and sent for distribution. 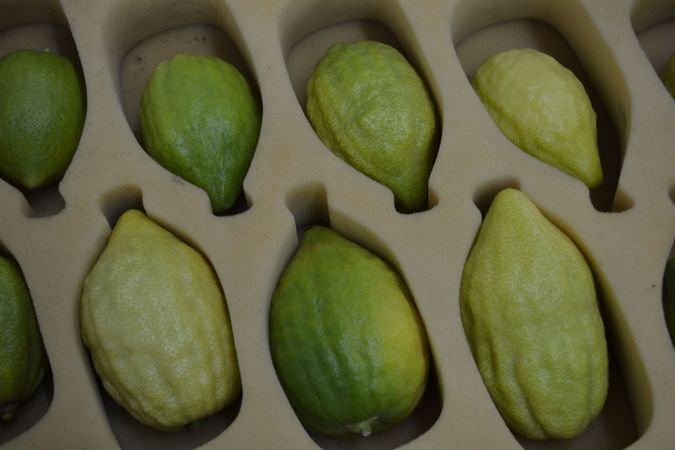 Etrogs are carefully packed in foam to protect the fruit. Image by Naomi Zeveloff

Uzan, a 32-year-old father of four, learned to farm etrogs from his father, who grew them in the Gaza Strip. He prefers not to talk about his family’s evacuation from the area, which occurred when he was 21. “I don’t look back,” he said, referencing the biblical story of Lot’s wife, who turned back to look at Sodom as it was being destroyed and was turned into a pillar of salt.

“Our attitude at home after the disengagement was always to focus on the building, not the mourning” he said.

The etrog has helped Uzan’s family regain its financial footing 11 years after the Gaza evacuation. While the fruit is expensive to produce, it pays off, he said. Every year, there will be a Jewish market for high quality etrogs.

Etrog connoisseur though he is, Uzan often forgets to choose one for himself until all the “diamonds” are gone.

“I just take whatever there is,” he said.