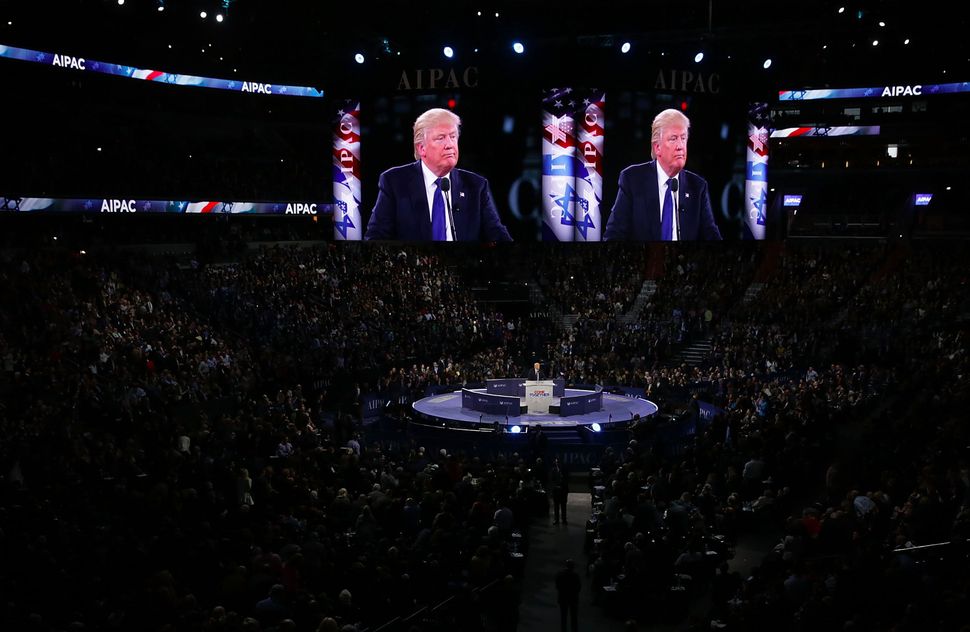 Donald Trump will address supporters by video message at a restricted Republican gathering in Israel this week, but there is no sign that the event will succeed in turning around his flagging support among American Jews or even evangelical Christian backers of Israel.

According to Marc Zell, head of Republicans Overseas Israel, Trump and Michael Pence, his running mate, will speak in two separate video addresses for a few minutes each. The message of the event will be “supporting Jerusalem and the unity of Jerusalem” in light of the recent UNESCO statement that diminished Jewish ties to two holy sites in Jerusalem’s Old City.

For the past eight years, an influential segment of American Jews has taken its cues on domestic politics from Israel — hence the widespread hatred for President Obama to a degree unprecedented among a demographic that’s known for its loyalty to Democrats. Israel has become a decisive issue for evangelical Christians as well, and contributed to their dislike of the president. But the Republican candidate’s investment in its Israel operation, widely considered to be more organized than many of its offices in the states, doesn’t seem likely to win him that support this time.

“Obviously, no single event can sway significant numbers of voters,” said Steven M. Cohen, a sociologist who studies Jewish voting patterns at the Hebrew Union College-Jewish Institute of Religion. “But the messaging of this event is unlikely to swing any American Jews who, in general, are far more dovish on Israel-related matters than are the speakers at this event.”

Originally billed in a press release as a “major campaign rally” that would be broadcast live on major U.S. cable channels, the event on October 26 has shrunk in scope. It will be restricted to about 150 activists, volunteers, donors and members of the media at a Jerusalem rooftop restaurant Harp of David. There will be no live cable broadcast. The party has room in a downstairs area for about 300 members of the public to watch a video feed of the event.

The only Israeli politician at the event will be Sharon Gal, a onetime Knesset member from the Yisrael Beitenu party who left politics for journalism. Several prominent right-wing personalities will be there, including Jerusalem Post columnist Caroline Glick and Israel Hayom columnist Chaim Shine. Yoram Sheftel, an attorney and commentator known for his inflammatory anti-Arab statements, will be there, as well as May Golan, an activist against asylum seekers in Tel Aviv.

Tally Zinger, the representative for the Hillary Clinton campaign in Israel, accused Trump’s supporters in Israel of providing a “counterbalance” to the anti-Semitism espoused by some of his followers. She called the event part of the “uphill battle” of the Trump campaign to make its case to Israeli Americans and American Jews against Clinton’s long record of engagement with the Middle East, most recently as secretary of state.

Trump campaigners in Israel aren’t reaching out only to Jews, however; they also want evangelical Christian supporters of Israel to hear their message. Zell rejected a report by the Jerusalem Post stating that the event had “morphed” from a rally into a closed-door party aimed solely at evangelical Christians. But he did say that evangelicals are an important audience.

The Trump campaign, he said, should be the eyes and ears on the ground for evangelical Christians who are worried about the State of Israel.

“We are on the front lines,” Zell said. “Who better to make the case than those of us who are here in the face of all these developments that have been caused by an irresponsible [Middle East] policy pursued by Obama and his secretary of state?”

Abraham Katsman, the attorney for Republicans Overseas Israel, has appeared as a guest on Christian radio, including shows on the large Salem Radio Network, to speak about why Trump is better for Israel. He said that representatives of the Trump campaign in Israel have met with Christian delegations to Israel.

“The issue of Israel is an issue of deep concern for [evangelical Christians],” Katsman said. “I would say more so than for a lot of American Jews.”

Yet it’s unclear if this outreach to evangelicals will work. According to Mark Valeri, a professor of religion and politics at Washington University in St. Louis, while the topic of Israel is important to the evangelical community, it ranks much lower than other issues in this election.

Valeri called Israel “relatively distant from the immediate concerns” of evangelical voters, and said that the Republicans Overseas Israel messaging could take months” to sink in. “I don’t think there is enough time for it to play a factor,” he said.

Evangelical support of Donald Trump took a hit after the release of the 2005 “Access Hollywood” tape in which Trump described grabbing women’s genitals. Valeri said that “moral qualms against Trump’s personal behaviors” could cause evangelicals to vote for Trump at levels of 60% or below. In the past three elections, white evangelicals have voted for the Republican candidate at rates over 70%, according to data from the Pew Research Center.

Despite predictions to the contrary, Zell said that he believed that Trump could still pull off the election. He said a recent conversation with insiders in the Trump campaign left him feeling hopeful.

“I am optimistic about this, and if you dare to print that, please do,” he said.