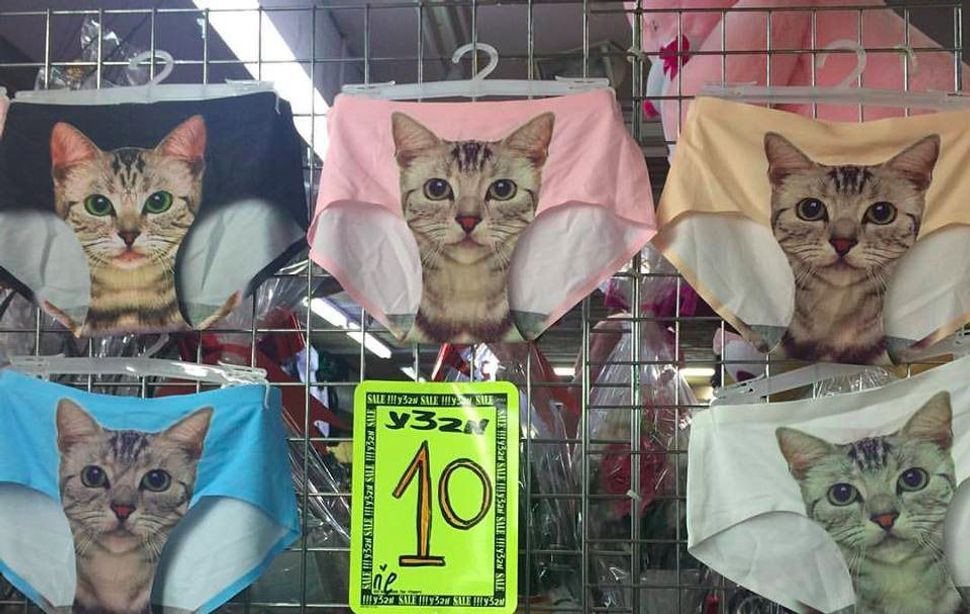 A discount lingerie shop in Tel Aviv’s gritty bus station has made an unexpected political statement about the American elections with a sale on pussy panties — women’s underwear printed with a photograph of cat’s face and neck in the crotch area.

I first spotted the panties last week and they seemed to me the perfect comment on Donald Trump’s boast on the Access Hollywood tape that he would grab women “by the pussy.” They cost 10 shekels (about $2.60) a pair.

When I posted a photograph of the panties online, more than a dozen friends wanted to know how to get them. I know of at least three people — two Americans and one Israeli — in Tel Aviv who have purchased the panties for their friends. They are posting their panty photos online too.

@naomizeveloff I found her! She said everyone is coming for the pussy today and asked if I was also here for “the competition Donald Trump.” I bought 5. “He touches women,” she said. “I don’t like him.” #pussygrabsback @naomizeveloff makes waves. Again.

Ophira Shorek, the 50-year-old manager of the store, called Zizana, was tickled to know that her pussy panties are making a splash among Americans in Tel Aviv and beyond with an eye toward the election.

She said that the political message was completely unintentional. The owner bought a bulk order of 4,000 pairs from China. Most of her customers are Israeli women who think the panties are cute.

Shorek called Trump a “clown,” and said that she’s glad her pussy panties are being seen as a protest against him.

If Trump came to Israel, she said, women would grab him right back.