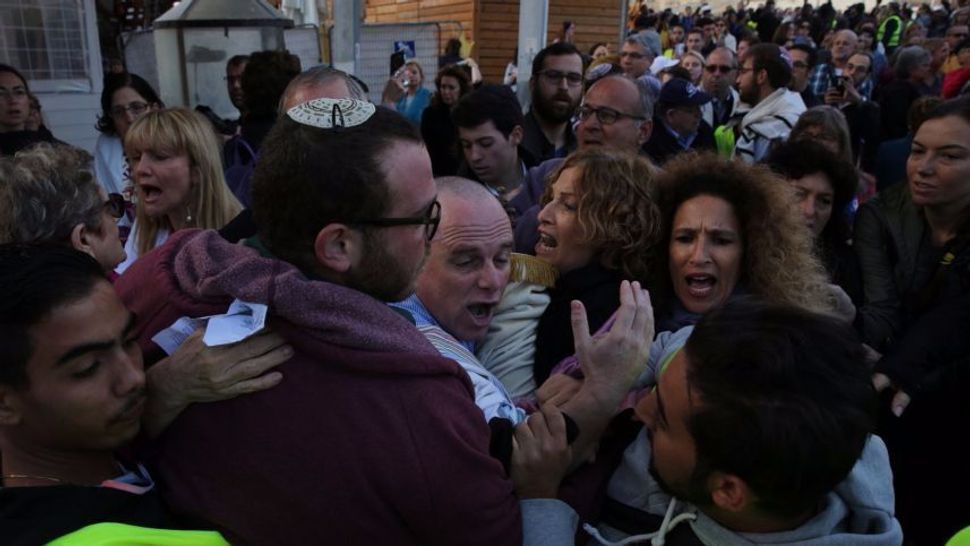 Unprecedented clashes broke out at the Western Wall in Jerusalem on Wednesday morning as hundreds of protesters from around the world, led by a delegation of prominent Reform and Conservative rabbis, marched in protest of the government’s failure to create an egalitarian prayer space at the holy site.

Eventually, the religious leaders managed to break through the security barrier, making their way to the Western Wall with eight Torah scrolls. Regulations at the site prohibit worshippers from bringing their own Torah scrolls to the premises.

At the holy site, they were met by a mob of very young ultra-Orthodox protesters, who physically attacked them. A few of the rabbis, including Yizhar Hess, the head of the Conservative Movement in Israel, were pushed to the ground.

Also leading the protest was be Rabbi Steven Wernick, chief executive officer of The United Synagogue of Conservative Judaism, and Rabbi Rick Jacobs, president of the Union for Reform Judaism.

While substantial police forces were present at the scene, they only waited until the very last minute to intervene and end the violence. Instead, the officers observed the scene and, at times, filmed.

The demonstration was scheduled to coincide with the monthly prayer service held by Women of the Wall, the multidenominational feminist prayer group, at the Jewish holy site. During the prayer service, Women of the Wall were taunted, prompting some of their supporters to ask police to intervene. When police refused, male supporters were dispatched to protect the group in case of outbursts of violence.

“We have one people and one wall — it’s our wall,” he said. “The less publicly we talk about it, the better chance we have to resolve it. The last thing we need is more friction, as that will make a solution more difficult.”

In January, the government voted to create a new section at the southern part of the Western Wall – near the area known as Robinson’s Arch – where members of the non-Orthodox movements could hold egalitarian prayer services. The deal was struck following three years of negotiations. However, under pressure from his ultra-Orthodox coalition partners, Netanyahu has refrained from implementing it.