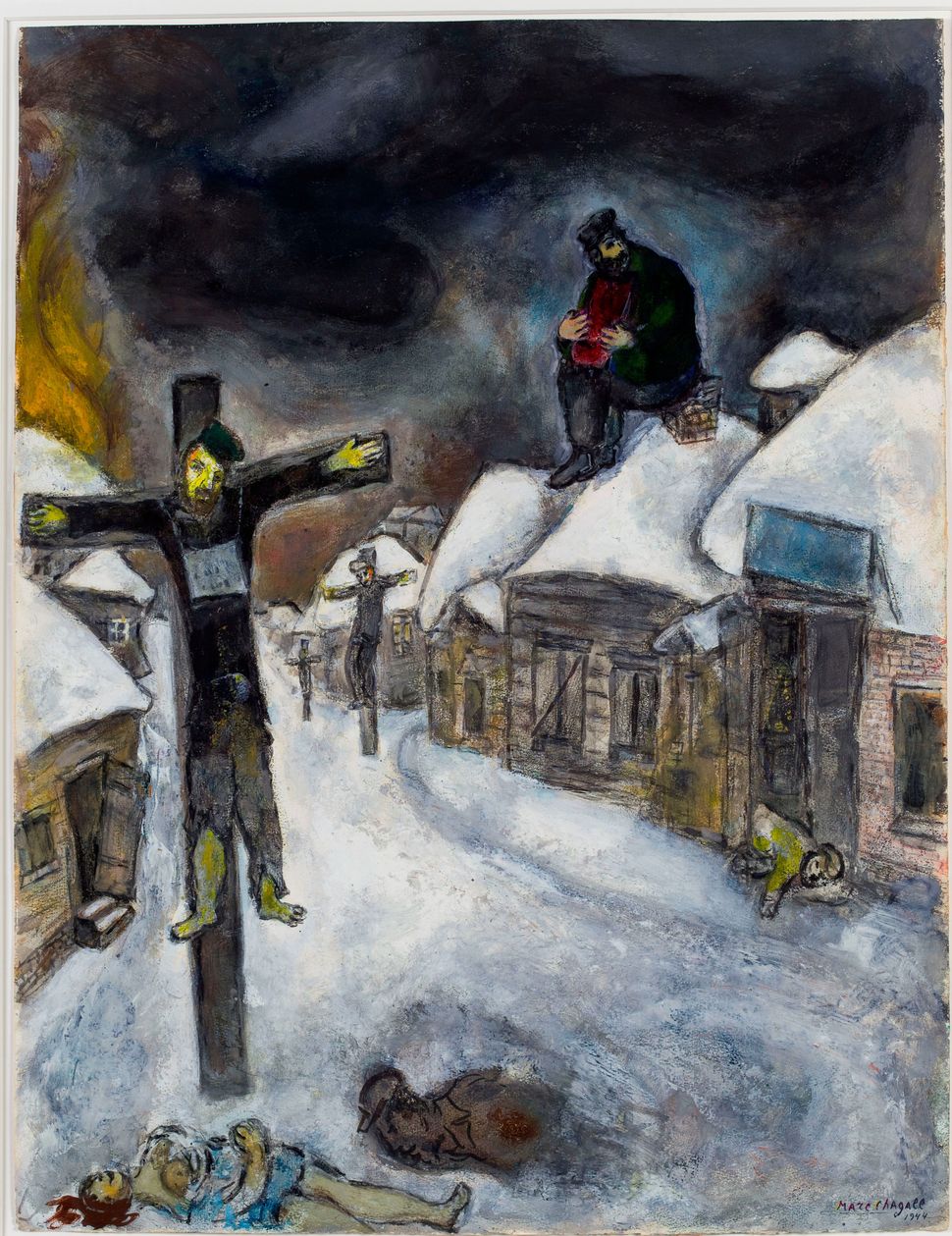 Marc Chagall, the Russian-French artist, created several works depicting Jews on the crucifix, like the 1944 painting, as a comment on violence against Jews in Europe. Image by Israel Museum Jerusalem photo by Avshalom Avital

The museum considered a cornerstone of modern Israeli identity has decked the walls with Jesus-inspired works by Jewish and Israeli artists this holiday season.

“Behold the Man: Jesus in Israeli Art” (a misnomer since there are several works by non-Israeli Jews) is on display at the Israel Museum in Jerusalem through April.

Jesus’ place in Israeli and Jewish art is complex. Blamed for centuries for his death, Jews historically saw Jesus as the cause of their suffering. After the Enlightenment, as they gained communal rights in Europe, Jewish artists and thinkers began to consider Jesus’ Jewish roots as a source of reconciliation with Christians.

Maurycy Gottlieb, from Poland, was likely the first Jewish artist to depict Jesus in his work. In his 1879 painting, “Christ Preaching in Capernaum,” Jesus, dressed in a Jewish prayer shawl with a halo around his head, preaches from the pulpit of a Greco-Roman synagogue. Jesus is a “bridge” between Jews and Christians in this image, said Amitai Mendelsohn, the exhibit’s curator. 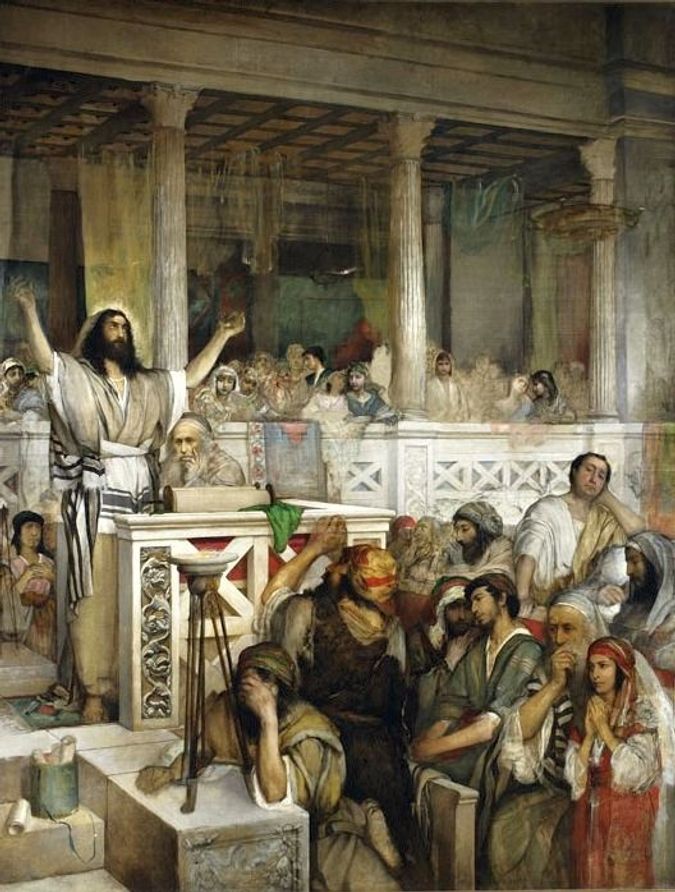 Since then, Jesus has served a range of symbolic purposes in Jewish and Israeli art. The Russian-French painter Marc Chagall used Jesus as a representation of Jewish affliction during the Holocaust. In several of his paintings, crucified Jesus is set against scenes of European pogroms. (Such as “The Crucified,” 1944.)

Romanian-born Israeli artist Reuven Rubin used the infant Jesus as a Zionist symbol, which represented the rebirth of the Jewish people in their biblical homeland (“Madonna of the Vagabonds,” 1922). Igael Tumarkin, a German-born Israeli, used the figure of the cross to convey the displacement of Bedouins at the hands of the Israeli government (“Bedouin Crucifixion,” 1982). 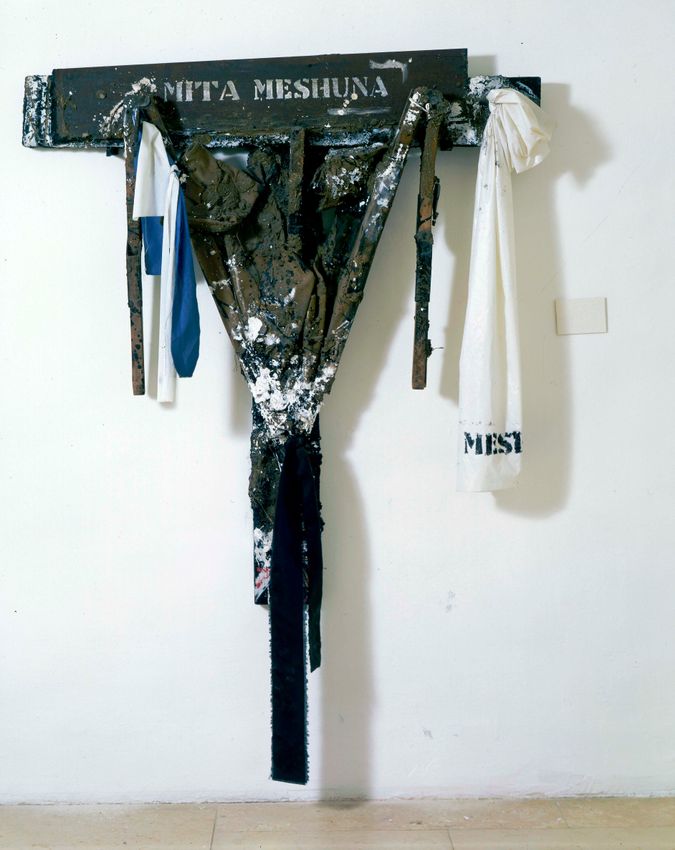 Igael Tumarkin’s 1984 sculpture “Mita Meshuna,” a crucifix made out of an army bed, is a comment on the human toll of the First Lebanon war. The title is a play on words meaning both “Strange Death” and “Strange Bed.” Image by Israel Museum Jerusalem

The Israeli artists featured in the exhibit are broaching a taboo in their work. Though about two percent of the Israeli population is Christian Arab, Christian history is barely taught in Israeli Jewish schools, and Christian symbols are, broadly speaking, often associated with anti-Semitism. In recent years, Orthodox Jewish groups and rabbis have opposed public Christmas displays in mixed Jewish and Arab cities, concerned about Jewish assimilation. This year, two of Jerusalem’s chief rabbis asked local hoteliers not to put up trees or mark the secular New Year with parties.

In this context, the Israel Museum exhibit could be seen as provocative. But, as Mendelsohn notes, the artists don’t deify Jesus so much as borrow from him, approaching Jesus from a distinctly Jewish-Israeli perspective. “None of these artists say ‘Let’s convert,’” he said. The artwork is “not connected to his divinity but to his universal messages.”

Still, the sense of transgression is partly what makes the exhibit so distinctive — and it’s likely what drove some of the Israeli artists to explore Jesus as a subject in the first place, after learning about Christian history for the first time in art school, said Mendelsohn. He says that’s true of his own work. Mendelsohn crafted the exhibit out of his PhD research on Jesus in Jewish and Israeli art at Ben-Gurion University.

“I was attracted, like the artists are attracted, to something forbidden,” Mendelsohn said.