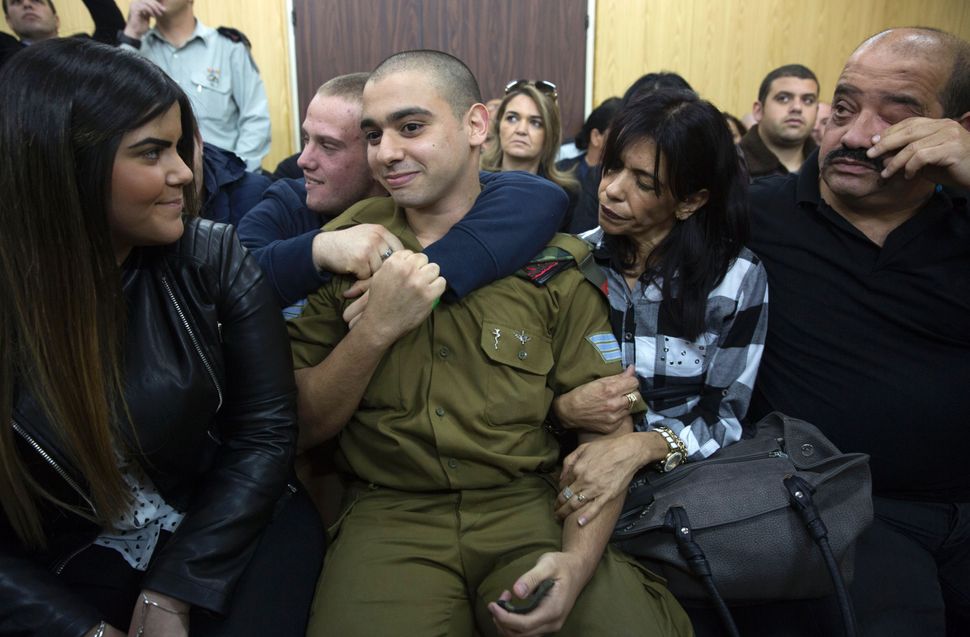 An Israeli military court convicted a 20-year-old soldier of manslaughter Wednesday in the fatal shooting of a subdued Palestinian, ending a saga that riveted the nation for nearly a year.

Why was this particular trial so gripping and polarizing in Israel?

Judges found Elor Azaria guilty of “needlessly” killing Abed al Fatah al Sharif as he lay incapacitated on the ground after attacking an Israeli soldier in March. The shooting was captured on video published by Israeli human rights group B’Tselem. The case broke open deep tensions in Israeli society over the conduct of the military in the Palestinian territories. Right-wing Israelis – including Prime Minister Benjamin Netanyahu — are now calling to pardon him.

Tehilla Shwartz Altshuler, the director of the Center for Democratic Values and Institutions at the Israel Democracy Institute, says there are five reasons:

1). Because it involved the army

With mandatory conscription for most Israeli men and women, the army is a “holy thing” in Israel, said Shwartz Altshuler. Many Israelis could identify with Azaria, and many parents could see themselves in his parents. Azaria’s supporters painted him as the son of the nation, who acted heroically to protect it. His detractors, meanwhile, called him a trained soldier who broke the law. Whether or not Israelis agreed with his act, Azaria’s case had great emotional pull because of the military connection.

2). Because it involved B’Tselem

Hawkish Israelis have painted B’Tselem as a treasonous organization that seeks to harm Israel by drawing international opprobrium onto the Jewish state. B’Tselem says it is upholding the rule of law in Israel. The anti-B’Tselem drumbeat has grown so loud in recent years that even lawmakers of the center-left Labor party have condemned the organization. This was not helped by B’Tselem director Hagai El-Ad addressing the UN on settlements last October. The fact that B’Tselem published the incriminating video of Azaria gave his supporters another reason to claim Azaria did no wrong.

3). Because it was heavily covered in the media

The Israeli media’s wall-to-wall coverage of the Azaria case, including the publication of the B’Tselem video, lead critics to say that the media was biased against Azaria from the get-go by blowing the incident out of proportion. Israel’s right-wing public and leaders — including Netanyahu – have long accused the Israeli media of liberal bias. In the Azaria case, the media was seen as attempting to paint Israel in “darker colors because they are lefties,” said Shwartz Altshuler.

4). Because political leaders weighed in

Israeli social media has been in an uproar over the Azaria case for months. Right-wing social media giants like rapper Yoav Eliasi, known as The Shadow, have been able to translate the online fury into on-the-street action like today’s hundreds-strong protest outside the Tel Aviv trial. Israeli politicians on the right understand that Azaria’s cause resonates with their base. That’s likely why Netanyahu, who at first denounced Azaria’s act, later made what many interpreted as a show of solidarity by phoning his parents, said Shwartz Altshuler. Many other right wing politicians have done the same.

5). Because it involved the Palestinians

Israeli policy toward the Palestinians is what divides the right from left, more than economic or social issues. Because the Azaria incident happened in Hebron, a flashpoint city in the Israeli-occupied West Bank, at the height of a slew of Palestinian attacks on Israelis, it has intense resonance among the Israeli public.