Can Generals Scare Israelis Into Accepting a State for Palestinians? A group of former Israeli security chiefs in favor of a two-state solution is trying to scare the Israeli Jewish public into separating from the Palestinians with massive billboards of a Palestinian demonstration with Arabic writing that reads: “We will soon be the majority.”

The ad campaign plays on the fears of a so-called “demographic threat,” the idea that Palestinians will one day outnumber Israeli Jews in the Holy Land and turn Israel into Palestine.

The billboards includes an English language logo that says “Palestine: One state for two people” and a phone number to call for Hebrew. The number leads to a recording from the group’s founder, retired Israeli general Amnon Reshef.

“Are you sick of these Palestinian billboards?” he asks. “We are too. But they will disappear in a matter of days. What will not disappear is the millions of Palestinians who live in the West Bank.”

Reshef goes on to say that Israel will be stuck with the Palestinians if it annexes the West Bank, a proposal that has been gaining traction in Israel in recent months.

“We can say goodbye to the Palestinians now, without a soldier in the field,” the group’s Hebrew web site reads. 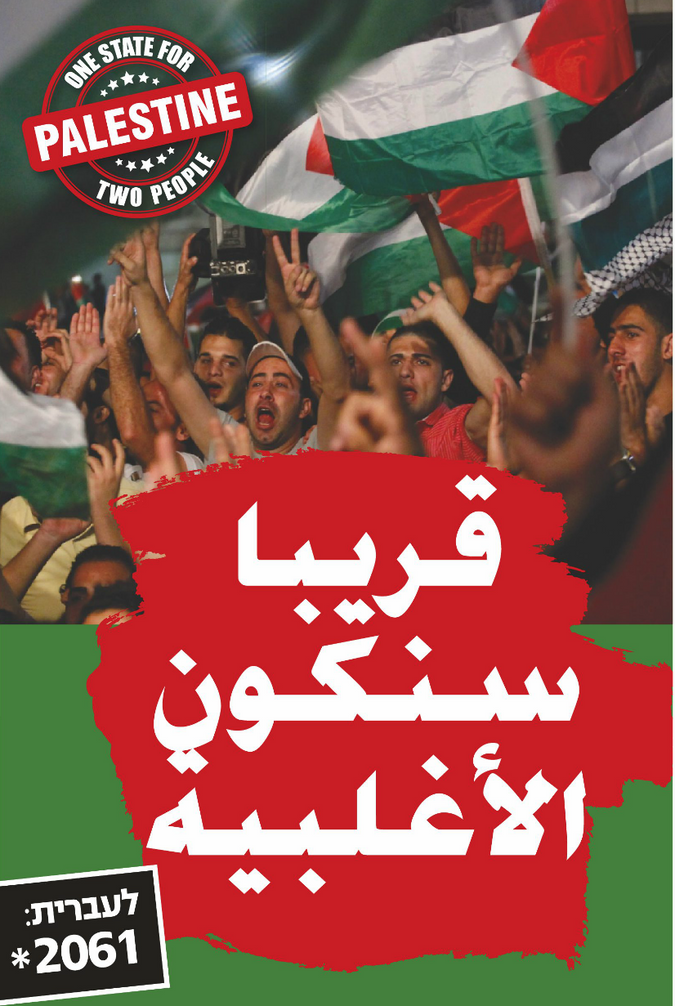 “Save your money,” he wrote. “We won’t allow the establishment of Palestine in the heart of our country.”

The billboards were also criticized from the left. Israeli-American writer Mairav Zonszein called them “blatantly racist” in a post on +972, the anti-occupation news and commentary site.

“The campaign strategy is apparently to be provocative by using Arabic so as to wake Israelis from their apathy,” she wrote. “But it’s not provocative, it’s just inhumane. It describes an entire people — people who are native to this land — as an existential threat, simply for living.”

The organization behind the billboards, Commanders for Israel’s Security, or CIS, launched its campaign in time with Sunday’s Paris Peace Conference, where representatives of 70 countries, including the United States, reaffirmed their commitment to advancing a two state solution for Israelis and Palestinians. Israeli Prime Minister Benjamin Netanyahu boycotted the summit. Palestinian president Mahmoud Abbas did not attend, but supported the conference’s aim.

CIS is made up of more than 250 retired senior Israeli security officials (according to Zonszein’s count, just two of them are women). Their proposal is a two state solution for Israelis and Palestinians based on the 1967 borders but with adjustments for “Israel’s security and demographic needs.” The group endorses the Arab Peace Initiative, a proposal for ending the occupation put forth by the League of Arab States.

Can Generals Scare Israelis Into Accepting a State for Palestinians?