300 Women Rally in Tel Aviv in Defiance of Trump 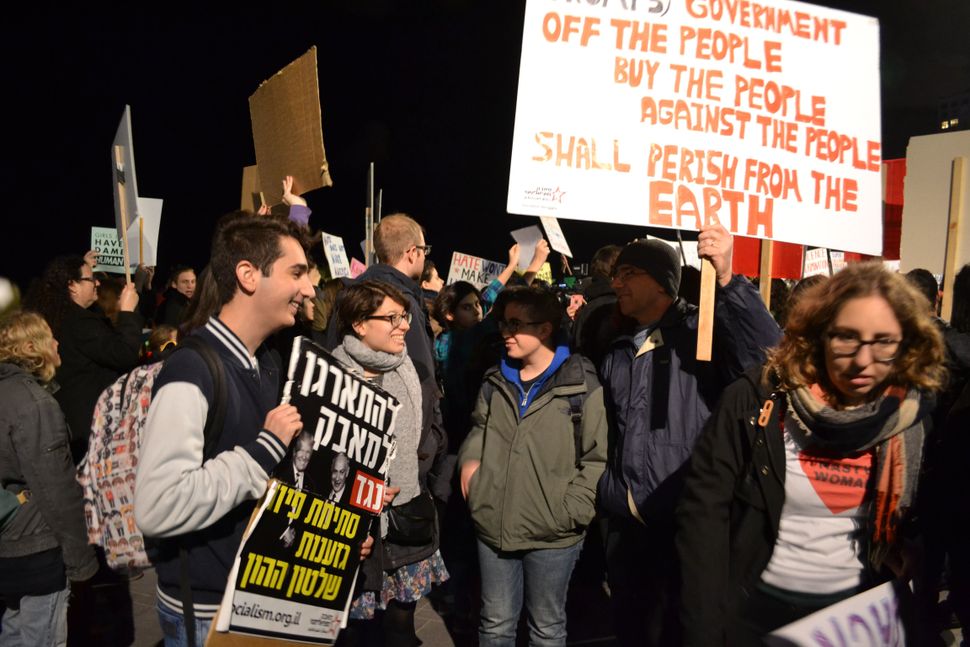 About 300 Americans, Israelis and dual nationals, including a handful in pink pussy hats, waved Hebrew and English signs and chanted outside of the United States embassy in Tel Aviv in a sister rally to the Women’s March on Washington.

Protestors spoke for women’s and LGBT rights and democracy and against anti-Semitism and Islamophobia in a demonstration that focused in part on Israel’s occupation of Palestinian territory. 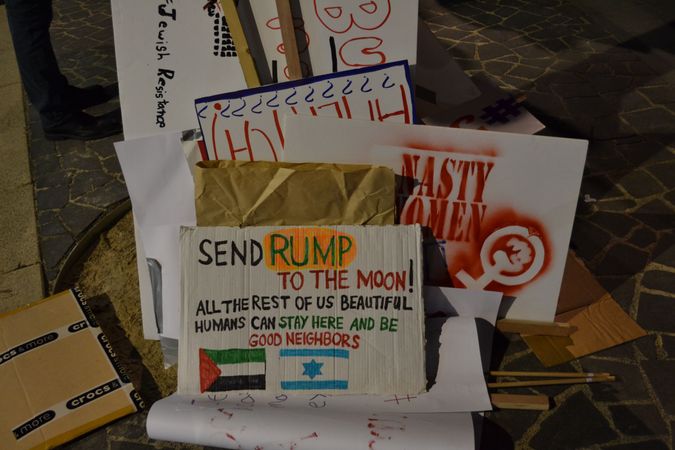 A pile of signs at the Tel Aviv protest. Image by Naomi Zeveloff

Standing on a pavilion on the Tel Aviv beach at 8:00 PM in Israel as other sister marches kicked off across America, the protesters sought to counter the Trump mania among many in the Israeli right who see the new American president as an ally in their quest to bury the two-state solution.

Larry Derfner, a journalist and columnist for Israeli and American outlets, called for the boycott of David Friedman, Trump’s pick for Israel ambassador, should he be confirmed. Friedman, a settler supporter, is in favor of moving the embassy from Tel Aviv to Jerusalem, a move that would please Israeli nationalists but possibly spark violence between Israelis and Palestinians.

“Boycott Friedman!” the crowd chanted, later following up with “Tel Aviv to DC, do not move the embassy!”

“As liberals and progressive English speakers in Israel it’s easy to feel like we’re a minority,” said Mindy Goldberg, one of the organizers, speaking through a megaphone as she stood on a park bench facing the Mediterranean Sea. “But if you look around here tonight I think you can say that’s not the case.”

Protesters carried signs with a distinctly Jewish messages like “Justice, justice, shall you pursue,” from the Torah, “My Ancestors Did Not Flee Anti-Semitism for This,” and a quote from Nobel Laureate and Holocaust survivor Elie Wiesel, who died in 2016, warning people of conscience not to “fail to protest.” 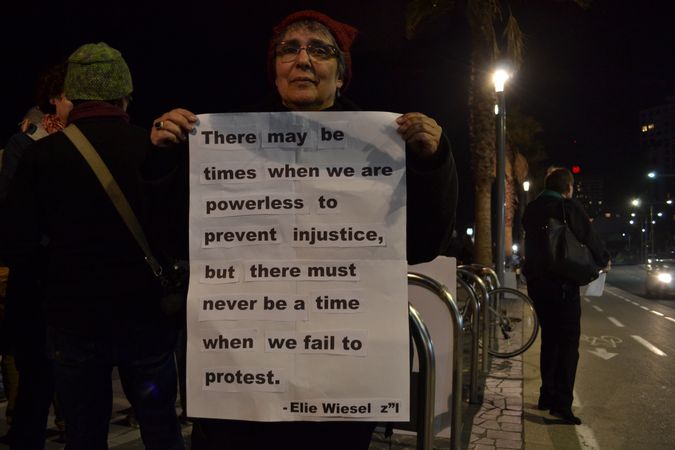 Chana Tyman-Levy holds a sign with a quote from Elie Wiesel. Image by Naomi Zeveloff

Others went the more general route, with messages like the now-classic “Love Trumps Hate,” and “Women’s Rights are Human Rights,” a Hillary Clinton quote. One person waved a board with a single word in all capital letters: “UGH.”

“I had a little bit of FOMO,” said Adina Sussman, who said she decided to protest in Tel Aviv because “everyone” she knew seemed to be headed to the march in Washington. She was wearing a pair of ceramic breasts strung on her forehead. 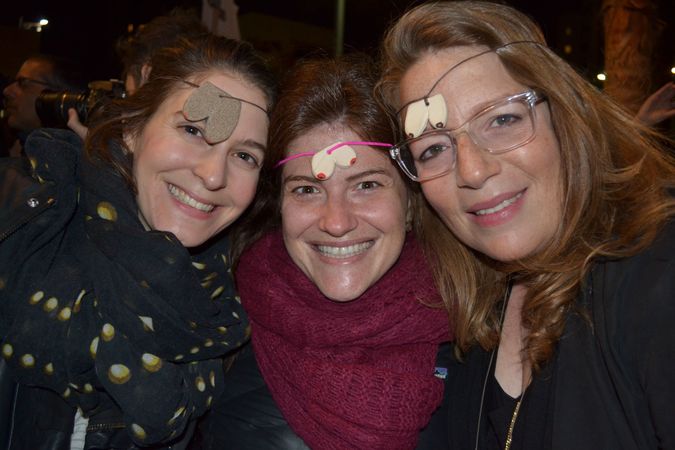 Her friend Tressa Eaton, also with a breast pendant between her eyes, said it was important to “show global solidarity” with the women in Washington, and to show that people in Israel “come in all stripes and colors.”

Many of the anti-occupation protesters wore white flowers, a symbol of an anti-Nazi group at the University of Munich. These flowers were meant to represent solidarity with the women of Bedouin villages facing demolition by Israeli forces since Israel does not recognize them as legal. 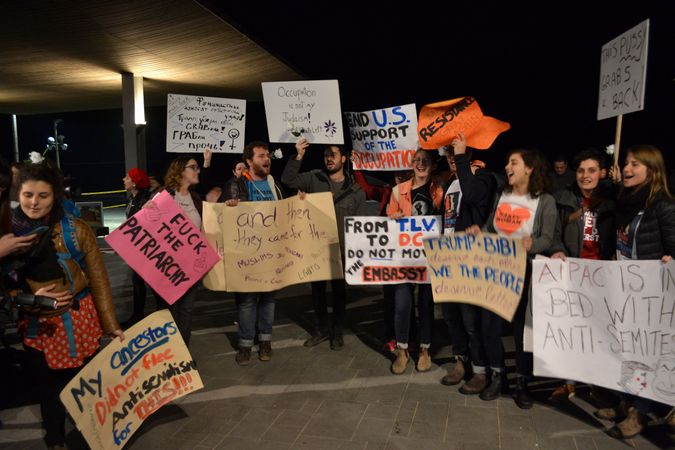 “Fight for justice from Washington to the South Hebron Hills!” shouted All That’s Left activist Erez Bleicher from the megaphone, referring to an area of the West Bank where Palestinians face settler violence and home demolitions by Israeli forces for lack of building permits.

Simone Zimmerman, a founding member of If Not Now, who briefly served as the Jewish community liaison for the Bernie Sanders campaign before she was fired over an old Facebook post cursing Israeli Prime Minister Benjamin Netanyahu, also spoke to the crowd.

“This week as Jewish Community Centers around the US received bomb threats, where was Trump, where was AIPAC, where was Bibi?” she said, using Netanyahu’s nickname. “Now is more clear than ever that we need a Jewish resistance that can say that when our leaders have failed us, when they incite hatred and fear we insist that we deserve a better world and we will resist with everything we have to win it.”

One woman in the crowd, a Catholic-raised tourist named Laurie Bell, said that she had sought out the Tel Aviv protest since she missed the Washington march because of her vacation in Israel. While many of the other protesters were fired up about the U.S.-Israel relationship or anti-Semitism in Trump’s America, Bell was still focused on what might have been in the U.S. election.

When asked why she came, she lowered her voice. “I’m still with her.”

300 Women Rally in Tel Aviv in Defiance of Trump