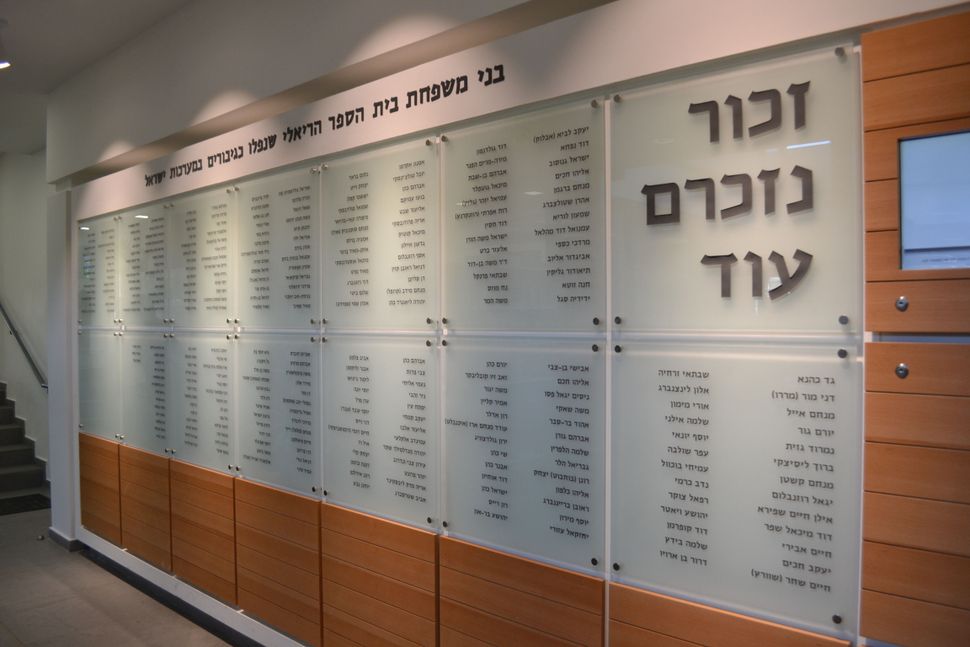 A wall outside the library in the Reali school lists 300 graduates who have died serving in the military. Image by Naomi Zeveloff

On the wall outside the library at the Hebrew Reali School of Haifa is a list of names. The last one is Shira Tzur, a 20-year-old graduate of the school who died last month when a Palestinian man rammed a truck into a group of Israeli soldiers on a Jerusalem street, killing Tzur and three of her comrades.

Tzur’s death, on January 8, was a grim milestone for the school. Tzur was the 300th graduate to die while serving in the Israel Defense Forces; all 300 names are listed on the glass wall outside the library. In Israel, Reali has an elite reputation. But there’s another side of its prestige, which is that it has lost so many alumni in the army.

Most students learned of Tzur’s death on television that night, after Israeli authorities released her name to the public. The next day at school, a table with a candle and her photo was set up on the campus walkway.

Noa Stern, an 11th-grade student studying biology and chemistry, said that Tzur’s death struck a chord for her, since it happened as Stern was preparing for her military entrance exams.

“They were students just like us,” she said of Reali’s 300 fallen soldiers. “And we are going to be a soldier just like them.”

There are two reasons that Reali, where 4,000 students study at six branches from kindergarten to high school, has so many deceased IDF soldiers among its graduates. One is the fact that Reali has been around for more than 100 years as one of the oldest and most expensive private schools in Israel. (Its alumni include 37 Israel Prize winners, three Israeli High Court justices and one former president, the late Ezer Weizman.) The other reason that it focuses on producing military elites.

Arthur Biram, an Israeli educator who wanted to provide a Hebrew alternative to the German-language Jewish schools in pre-state Palestine, established the school in 1913. Founded in connection with the Technion, the school specialized in scientific and technical studies. “Reali” or “real,” refers to the study of the natural world. Today’s students can read about the history on an illustrated timeline inside a shed on the high school campus; the building’s green exterior is a favorite backdrop for the students’ Instagram selfies.

Reali’s first fatalities were teachers and graduates killed in Israel’s 1948 war. Amazia Barlas, an artillery officer who was killed in June 1948, graduated in 1931. His was the first class to lose a graduate in the military. The number of fallen soldier alumni spiked in 1973, when 73 graduates died in the Yom Kippur War.

Reali sends many of its students into what are considered the most elite units of the army, which are also the most dangerous. In addition to a regular secular high school, Reali has a military boarding school where students attend classes and prepare for service. According to Reali’s principal, Yosi Ben-Dov, 98.5% of the majority-Jewish student body serve in the army, where they are recruited into units like Sayeret Matkal, a special forces commando unit, and Sayeret Tzanhanim, a paratroopers unit. 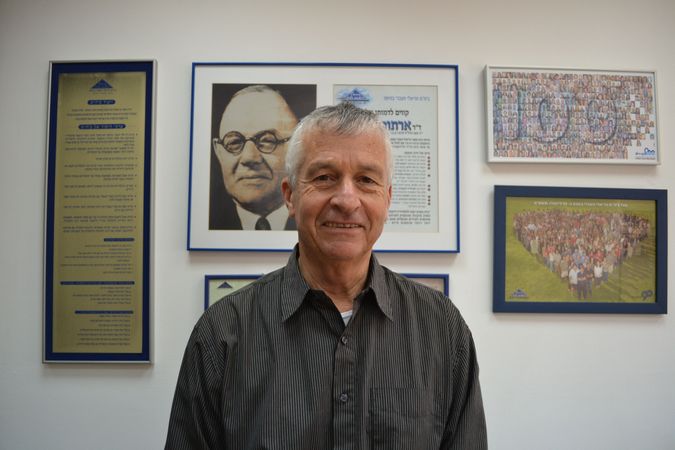 Yosi Ben Dov, the principal of the Reali school, in front of a photo of the school founder Arthur Biram. Image by Naomi Zeveloff

Soldiers in these units are not just biding their time until their compulsory service ends, Ben-Dov said. They are there “serving their country.” But with that sense of duty comes greater risk. “More people unfortunately get killed in those units,” he said.

In Israel, where military service is compulsory for all Jewish 18-year-olds — as well as the males in some non-Jewish minorities like the Druze — fallen soldiers occupy a vaunted position in society and an important role in education. Jewish schools memorialize graduates who died in the IDF as a way to inculcate Zionist identity, instilling reverence for those who died on the nation’s behalf at an early age. Education Minister Naftali Bennett even recently introduced a program for every grade in Jewish schools to “adopt” a fallen soldier and learn about his or her life and death.

With its high number of fallen soldier graduates, the learning environment at Reali is particularly saturated with references to wartime sacrifice. Students often produce reports on Reali’s deceased alumni, researching their lives in slim blue volumes compiled by the school on each of the 300. Each year, the names of these graduates are read in a 50-minute ceremony on Yom Hazikaron, or Memorial Day. The library is named after Menachem Reich, a fallen soldier who died in 1983, and whose childhood friend Gil Agmon donated $750,000 for its renovation.

“One of my pupils said it makes him think about, if, God forbid, anything would happen to him, he knows that at least he will be respected, he will never be forgotten,” said Sharon Fayerberger, an English teacher and the head of the 10th grade at the school.

According to Ben-Dov, the school complies with the standard Israeli definition of the fallen soldier, which is anyone who has died during military service or in reserve duty. This includes people who die in war and in terror attacks, like Tzur did, and also those who have died in accidents, as long as they were soldiers at the time. One civilian, Elad Riven, is included in Reali’s list of 300. The 16-year-old volunteer firefighter died battling the devastating 2010 Haifa-area blaze. The school has dedicated a garden in his memory.

“We feel it is part of our commitment to the State of Israel,” Ben-Dov said of the memorials. “That is why we educate our kids based on the stories of some of these graduates. We find it our commitment to honor their memory.”

Ben-Dov is aware of the risks of striking an overly militaristic tone in these memorials to dead soldiers, saying that the school must raise patriots who have a deep “reverence for human life.” He said that the student body is accustomed to vigorous discussion about Israel’s political situation. During the trial of Elor Azaria, the IDF soldier convicted of manslaughter for killing a prone Palestinian assailant in Hebron, students debated whether he should be punished or set free. One of Azaria’s commanders, who testified against him, was a Reali graduate, said Ben-Dov.

Still, students interviewed at Reali stopped short of criticizing the army or Israel’s compulsory military service. “There is a reason we are serving in the army,” Stern said. Critics of Israel’s use of force against the Palestinians misunderstand Israel from the outside or, worse, wished Israel harm, in her view. “We can be optimistic and hope that there will be peace and we will not serve in the army,” she said. “But I think if we don’t have the army, we just won’t be here.”

This sense of mission intensifies the impact of military deaths on Reali’s students and staff. Teachers often refer to the school as a “family,” and in many cases it is, quite literally, as alumni tend to send their children to the school. According to Ben-Dov, Reali has educated five generations of one Israeli family. Out of 500 staff members, 80 graduated from the school.

Many Reali students, teachers and alumni attended Tzur’s funeral. They either knew her or know her sister, who is currently a student at the school, or her brother, another graduate. Tzur’s family declined an interview request with the Forward through a school administrator.

Oren Hertzman, who was Tzur’s teacher, spoke about Tzur in his class. He mentioned her “good heart,” her dutiful study habits and the contribution she made to her country. The experience of memorializing a dead student in front of his living ones was in no way routine, and yet Hertzman had done it before.

This was his third student to die in the army in 25 years of teaching. 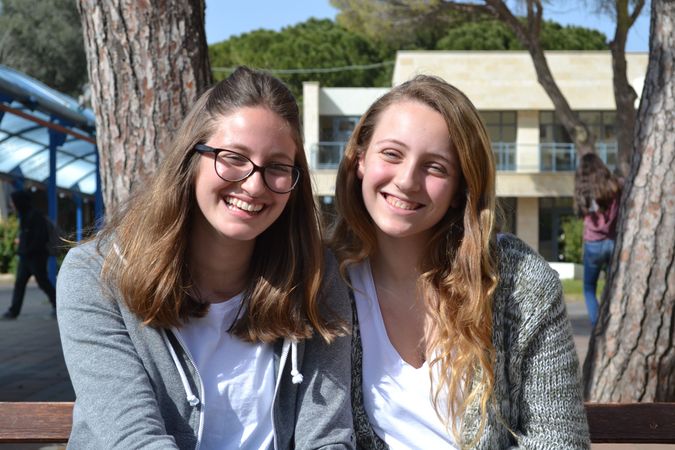 Sivan Kalika and Noa Stern are both 11th grade students at Reali. Image by Naomi Zeveloff

As students ready for the military, the true weight of national service “touches more on your lives,” said Sivan Kalika, another 11th-grader studying diplomacy. “It’s not like I’m looking at it from the side anymore. I’m in the situation.”

The risk inherent in joining the military is “understood” by every student and teacher without it being part of the curriculum, Fayerberger said. And it’s not something that the school community dwells on, even as it memorializes the 300 deceased graduates. “It is not our job to talk about death,” she continued. “We prepare them for life.”