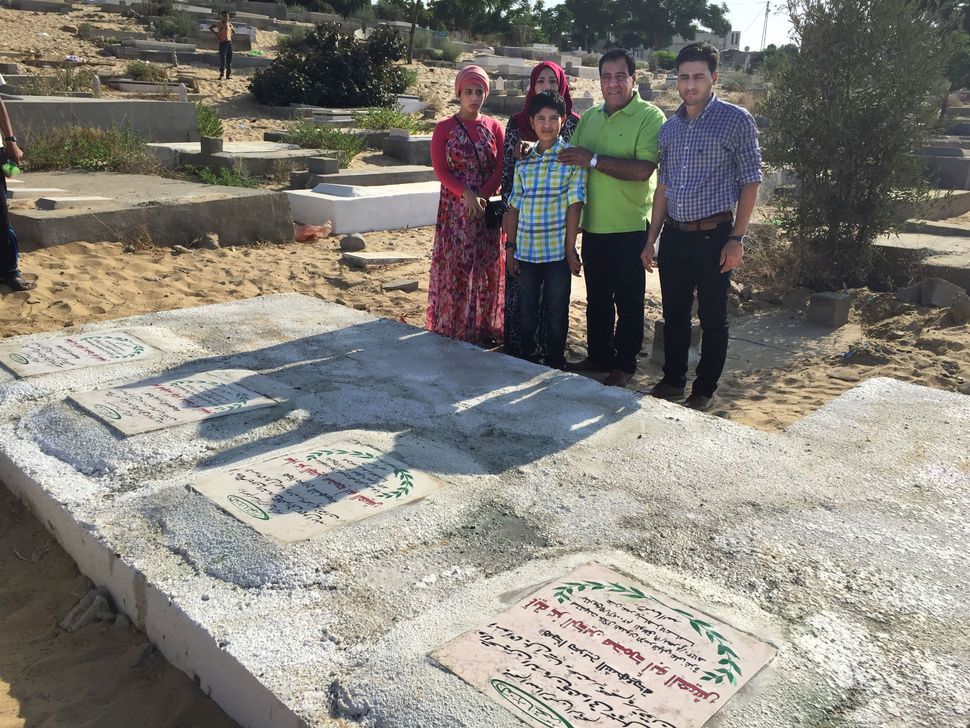 He was the beloved doctor of both Palestinians and Israeli Jews, the one who brought their children into the world.

Dr. Izzeldin Abuelaish, the Gaza-based Palestinian obstetrician and gynecologist who was the first Palestinian physician from the occupied territories to receive an appointment at an Israeli hospital, still believes passionately in peace and co-existence between Palestinians and Israeli Jews.

But now, Abuelaish is coming to a fateful moment in the long, drawn-out process of his lawsuit against the Israeli government for the Israeli army’s killing of his three daughters and a niece, and the severe wounding of another daughter during Operation Cast Lead, Israel’s 2009 military offensive in Gaza. The trial that will finally hear his case is set to start March 15.

“There was no reason to kill my daughters and niece,” told the Forward during a recent interview. “They were innocent civilians, and international law prohibits killing noncombatants in a war.”

Even as he worked side-by-side with Israeli colleagues as a researcher at Chaim Sheba Medical Center, in Tel Aviv, the University of London-trained doctor maintained his clinical practice in Gaza; he was one of the few Palestinians allowed to cross regularly between the occupied territory and Israel because of his work. It was work he continued even after his wife died of leukemia in 2008, leaving him a single father to his eight children.

Then, on January 16, 2009, at 4:45 p.m., an Israeli tank fired into Abuelaish’s Gaza City home during Operation Cast Lead in Gaza. The shells killed three of his daughters — Bessan, 21, Mayar, 15, Aya, 14 — and a niece, Noor, 17. Another daughter and niece were severely wounded. “Oh God,” he cried, “they killed my daughters. Allah, what have we done to them? Oh, God.” Abuelaish’s anguished wailing, in Hebrew, was heard live on television throughout Israel, and around the world. Immediately after the killings, Abuelaish phoned his friend Shlomi Eldar, the anchorman on Israel’s television Channel 10, to whom Abuelaish had been calling in regular reports on developments on the ground in Gaza during the war. Israeli reporters themselves were not allowed into the territory to cover the conflict.

This time, he reported on the chilling death of his own kin.

Eldar, still on the air, sought to get the Israel Defense Forces to allow Israeli ambulances into the territory to fetch and treat the children, but for the four who had been hit fatally it was too late.

“Their brains were splattered on the ceiling,” Abuelaish said in a 2011 interview with the Forward during a speaking tour after the publication of his book, “I Shall Not Hate,” an account of his life that was a response to the tragic killing of his daughters and niece. His narrative is one in which he refuses to succumb to feelings of revenge and hate. He calls instead for life-enhancing efforts in the service of peace.

Should there be a financial settlement in the lawsuit he has filed, Abuelaish says all money would be contributed to his foundation, Daughters For Life, which memorializes his daughters by promoting the education of women from the Middle East. Any woman living in a Middle Eastern country is eligible to apply for the program regardless of religious or ethnic background. During a recent appearance at Manhattanville College, in Westchester County’s Purchase, New York, Abuelaish, celebrating two years of the Daughters For Life Foundation, spoke of the foundation as making life from death and promoting hope from suffering.

Manhattanville is one of the American educational institutions that participate in the foundation’s placement of students. There are currently four young women who are foundation scholars at Manhattanville, three from Lebanon and one from Egypt.

The arc of Abuelaish’s life-against-the-odds seems extraordinary. He received his elementary and secondary education in the refugee camp schools of Gaza, run by the United Nations Relief and Works Agency for Palestine. This was followed by a scholarship to study medicine in Cairo and a diploma in obstetrics and gynecology from the Institute of Obstetrics and Gynecology at the University of London. Abuelaish completed his residency between 1997 and 2002 at the Soroka Medical Center in Beersheba, Israel, followed by a subspecialty in fetal medicine in Italy and Belgium, and a master’s degree in public health from Harvard University.

The current court case that pits Abuelaish against Israel raises questions about the morality of both sides — Israel and its adversary, the Islamist group Hamas, which still rules Gaza — during the three-week war in Gaza that began on December 27, 2008. Israel launched its military incursion in response to Hamas rocket attacks in southern Israel. The action ended on January 18, 2009, two days after the killing of Abuelaish’s daughters and niece.

Eldar, in an interview with the Forward, recalled that after his searing exchange with Abuelaish, Israeli Prime Minister Ehud Olmert later told the newspaper Maariv he cried. Twenty-four hours after the televised deaths, the Israelis declared a cease-fire. “His tragedy ended the war, said Eldar, referring to Abuelaish. “It was amazing because when I reported that thousands of people were killed in the Gaza Strip and injured, and all the destruction, the Israeli audience didn’t move.”

Despite the heavy fighting in his neighborhood, Abuelaish kept his family at home, he said, because he believed the Israeli government knew who he was and where he lived and would never harm him, or his family, as he continued to file on-air reports to Channel 10 from his home. The Israeli government released a court document that claims Abuelaish was warned a number of times to leave the area. A Ministry of Justice source, speaking on condition of anonymity, said Abuelaish was warned to leave his home and was told of the danger of remaining in a war zone.

Eldar also urged Abuelaish to leave because remaining seemed to him too dangerous. According to the court document, the incident occurred during war in a crowded urban area infested with terrorists and loaded with booby traps, where snipers ambushed Israeli forces and where there was an existential threat to the soldiers.

This document also claims it is not inconceivable that terrorists caused the damages described by Abuelaish. Abu Hussein, Abuelaish’s attorney, said the Israeli government has even claimed that a Hamas missile destroyed the home.

However, an IDF report dated February 4, 2009, admits that an Israeli commander ordered the tank to fire. According to the report, he did so “because suspicious figures were identified in the upper level of Dr. Abuelaish’s house.” The “figures” were thought to be spotters directing fire at Israeli forces. Abuelaish insists these are false allegations and that there were never any Hamas fighters using his home.

Abuelaish notes that two days earlier, on January 14, an Israeli tank had approached his house, coming about 10 yards from his door with pointed guns. He describes this incident in his book: “The tank pointing its guns at my house, surrounded by half-dead animals, looked like the angel of death. I called Shlomi Eldar.”

Eldar, who was unable to get through to the IDF, called a radio reporter, Gabi Gazit, who was then on the air, in the hope Gazit’s broadcast might reach the army’s ears. Gazit contacted Abuelaish and right away went live with the story. Shortly after the interview played on the radio, a military officer contacted Abuelaish. The tank left the house, imparting a false sense of relief. Two days later an Israeli tank returned and killed his daughters and niece.

The Israeli government claims in the court document that this is a wartime act of state and that the state is not responsible for damage borne of the side waging war against it. All damage caused by IDF activity is the result of combat activity, “and all claims served allegedly caused by the Cast Lead operation will be rejected completely.”

The court document also notes that the State of Israel ,“out of compassion alone,” paid hundreds of thousands of shekels for the medical treatment of the survivors of the attack on the Abuelaish house. The document asserts that Abuelaish is, therefore, claiming double compensation. The government statement suggests that Abuelaish’s real intention is to tarnish Israel’s image.

In an interview, Eldar said that Abuelaish wants an official apology from the Israeli government. “He wants the Israelis to know they did something wrong,” he said. Eldar described how he drove to the hospital after the incident, arriving at midnight. He said Abuelaish was still wearing bloodied pajamas. Eldar didn’t know what to say. Abuelaish’s surviving daughter and niece were still clinging to life.

“When you see a man who just lost three of his daughters, you are speechless,” Eldar said. “He was just crying. They killed his daughters.”