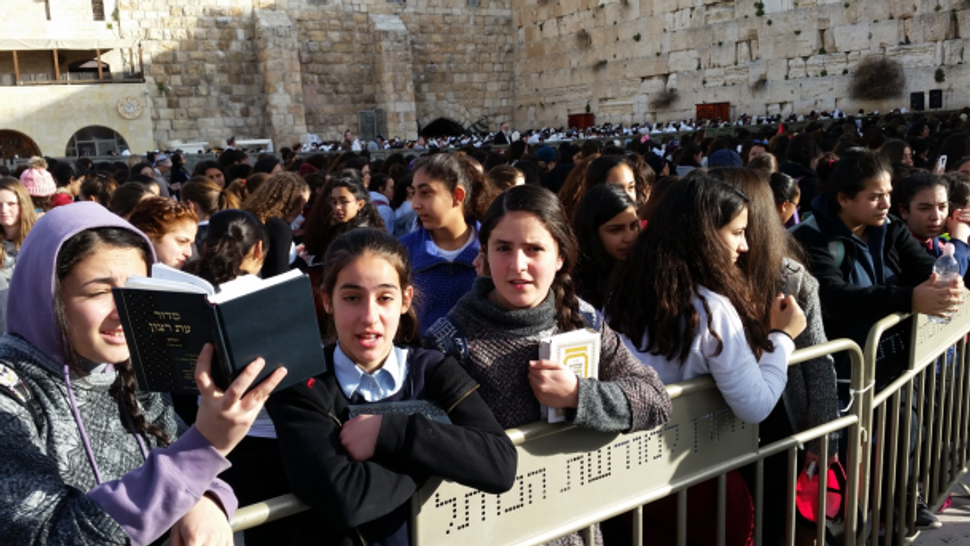 For years, women in Israel have been fighting for the right to pray out loud at Judaism’s holiest site, the Western Wall, just like men. But now, a group of girls has risen up to defend the status quo.

On Tuesday, February 28, at least 1,000 female high school students were bused there to protest a prayer service of Women of the Wall, the biggest group trying to make egalitarian prayer at the Wall a reality.

It was a striking scene: On one side of a police barricade specially erected for the event stood throngs of Orthodox teenage girls in long skirts and sweaters, holy books in hand. On the other side, around 120 Women of the Wall activists in prayer shawls and phylacteries, the black leather boxes and straps many Jews wear at the morning prayer, celebrated the bat mitzvah of a 12-year-old Israeli girl.

While most of the Orthodox teenagers prayed peacefully, a few yelled “animals” at the Women of the Wall group, according to news reports. (Organizers said that they instructed the girls to be respectful.)

The teen girl pray-in was organized by The Liba Center, a coalition of nationalist groups, and by Women for the Wall. The latter wants to maintain the status quo at the Western Wall, where women and men pray separately with restrictions on female prayer.

The girls missed school for a full day of events in the Old City. After praying at the Western Wall, they went to the Jewish section of Jerusalem’s Old City to dance and listen to a sermon by Shmuel Eliyahu, the chief rabbi of Tsfat.

Among the girls was a 12-year-old student from Petah Tikvah who woke at 4 a.m. to travel to Jerusalem with two friends. Her school had allowed the students to skip classes to attend, so long as they received parental permission. The girl was eager to attend the event, which, she said, was organized by two Liba-affiliated high school students. Her mother easily obliged. “Some things we learn in school and some things we learn not in school,” she said.

(The girl and her mother spoke on the condition of anonymity for privacy reasons.)

The teenager was motivated to go to fill up the women’s section with people who prayed according to the site’s Orthodox rules. The idea was to prove to the outside world that they are a bigger group than Women of the Wall.

“It wasn’t to fight against the Reform,” she said, referencing one of the non-Orthodox groups fighting for egalitarianism at the Western Wall, “but to fill up the place.”

Even so, anti-Reform sentiment was on display as the girl came home with a T-shirt from the Liba youth cohort with the words, “The eternal wall for the eternal people and not the Reform cult.”

When the 12-year-old reported back to her family about her day, she noted that some of the loudest fighters were not Women of the Wall, but Orthodox adult women who whistled shrilly to drown out the Women of the Wall prayers. “How can we daven with all this noise?” she said.

Women of the Wall say that the Orthodox are the ones turning the Western Wall into a battle ground, and that some groups are using the young women as ammunition to thwart the cause of religious equality at the Western Wall.

“I’m sad that they are setting up the women against us,” said Lesley Sachs, executive director of Women of the Wall. “I don’t think that this is a women’s battle against women. I think this is a battle of ultra-Orthodox men trying to tell women, whomever, how to dress, what to say, what to do and where to stand.”

Women for the Wall founder Leah Aharoni rejected the notion that the young women are being used unfairly in the fight over the Western Wall. She said that her group was simply providing a “platform” for the teenage fervor about the Jewish holy site.

She said that she met with 40 young female leaders recently and they named the Western Wall as a major area of concern. “They were very disturbed,” she said. “That is their spiritual home.”

Yigal Canaan, an activist with The Liba Center, conceded that young women have a strategic role to play in countering Women of the Wall. His group is countering a now-stalled government plan, negotiated with Women of the Wall and other liberal Jewish groups, to create an egalitarian section just south of the traditional Western Wall. In a video released last week, The Liba Center accused the feminist group of seeking to “divide” the heart of the Jewish people.

“I think that in every struggle, young people are more enthusiastic and more ideological,” he said. The presence of women also helps counter claims that the Western Wall religious authorities are discriminating against women. Women want the “traditional way,” he said.

Aharoni said that the prayer service was a lesson for the teen girls: “This is a message for our daughters to learn. If it is something that concerns you, it is productive for you to voice that concern.”