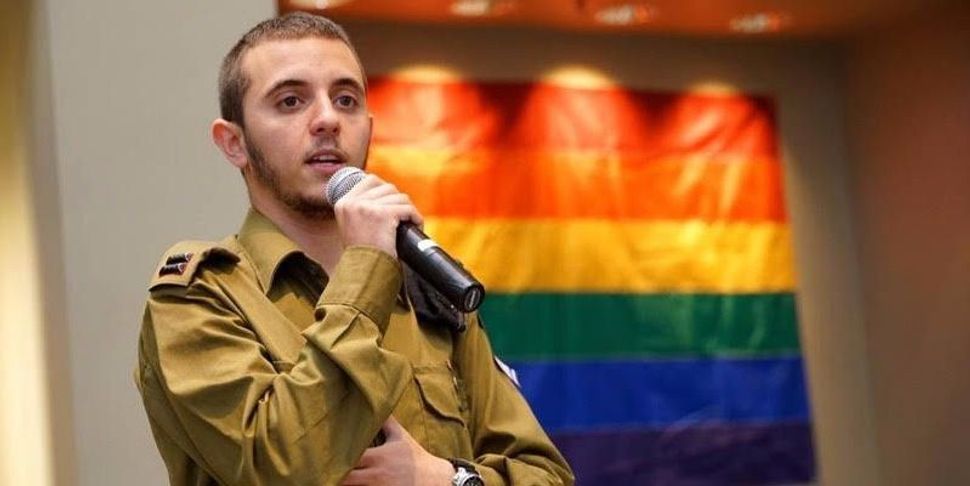 Shachar Erez, the first transgender officer in the Israeli military, is currently on a U.S. speaking tour. Image by Israeli Consul General of New York

Coming out as transgender can be difficult to do even once. Shachar Erez did it twice.

First, when he was 16 years old. But then he joined the Israeli military and went back into the closet. He enlisted as a female, worried that his identity could complicate his service.

And then, a year and a half later, at the urging of a supportive commander, Erez sat in front of a group of 60 cadets and came out a second time. Not only did his peers support him, he said, the Israeli military’s health insurance covered the cost of his transition, paying for testosterone injections and for top surgery, which can include a double mastectomy and chest reconstruction.

Today, as the first transgender officer in the Israeli military, Erez, now 23, is using his personal story to preach acceptance on a tour of the United States, sponsored by the Israel Defense Forces and the Israel Ministry of Foreign Affairs. He said that he has a message for all young people who feel different, not just for those who are transgender.

“I hope to give them the feeling that I got from the IDF, the fact that I am equal,” he said.

Erez is going on tour with his story at a sensitive time for gender issues in the army. Orthodox soldiers and their supporters are pushing for a more conservative IDF and want women barred from serving on the frontlines. Meanwhile, more and more women are seeking to serve in elite combat units.

Missing Piece Of The Puzzle

Raised in a small kibbutz in Northern Israel, Erez said he knew from a young age that he was transgender; however, he did not have the words to express his identity until he met a friend’s boyfriend who was transgender.

“I asked him what does it mean, and he said, ‘It means I was born a female but I’m a man.’ Shocked, I looked at him and said, ‘You can do that?’ He laughed at me and said yes.”

For Erez, that exchange provided the “missing piece of the puzzle.” He came out shortly after to his friends and family, and started living as “just another teenage boy.”

But when it came time to join Israel’s army, where enlistment is mandatory for almost all Israeli Jews and a few religious minorities, Erez said he was confused about how to approach the army regarding his identity. With no roadmap of how to come out in the army, he decided to stay silent and go back to being a girl.

“I was raised in a home where giving back to your country and serving your country and your community is basic, and those were the values I grew up with,” he said. “It was clear that I was going to do the draft and do the best that I can. I didn’t want anything to stand in my way.”

It wasn’t until his officer-training course that Erez began to see how coming out could be a positive thing for himself and for the army as a whole. In the course, he recalled, there was a lot of discussion among the officers about how to build a relationship with the soldiers serving beneath them. Erez believed that he owed it to his future soldiers to be transparent about who he really was.

And about a year and a half into his service, after months of deliberation, Erez decided to come out again. He chose to do it at a meeting in the last week of his officer course, at which a friend in his company gave a lecture about LGBT issues. Erez told his story and asked the other soon-to-be officers to refer to him by male pronouns.

Erez rejects the notion that the IDF, which features his story on its website, is using him in order to deflect criticism about the military’s treatment of Palestinians, which Israel’s critics call “pinkwashing.” The IDF has given him a platform to make “real connections” between Americans and Israelis on the issue of inclusion, he said.

“Israel is progressive about LGBT rights and it has nothing to do with the Israeli-Palestinian situation,” he said.

You Can Be Out In The IDF

Erez said his peers welcomed him immediately. His female roommates approached him and asked why he had kept his identity a secret for so long when they were so close to him. They congratulated Erez and told him they were proud of him.

He has now served in the IDF for five years, signing on for an extra three beyond the mandatory two. In addition to working on a national project to relocate military bases from the center to the periphery of Israel, he advises the gender affairs office at the IDF.

Erez serves as a resource for other transgender recruits, reassuring them that they will be able to be out in the military. He said that he knows of dozens of transgender men and women in the Israeli military.

In the future, Erez says, he will likely pursue an undergraduate degree in engineering. A vegan, he spends his free time cooking and exploring Tel Aviv’s vegan restaurant scene. When he’s finished with the army, he says, he’ll continue to advise other transgender recruits.

“I promised myself that even when I got released from the military I wouldn’t stop dealing with this issue,” he said. “I feel I have first of all a responsibility but also a lot of experience that I have to use in order to help others.”