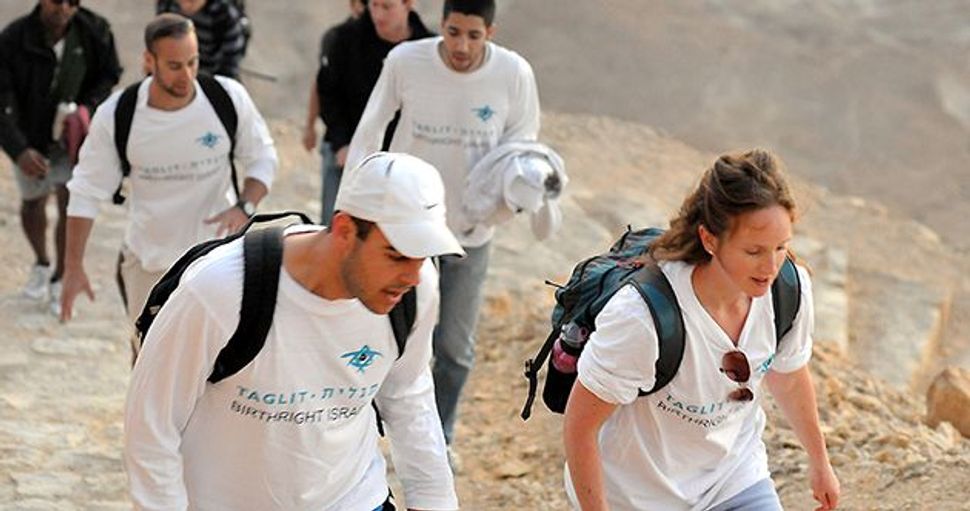 More than 500 Jewish American students are challenging Birthright, the  biggest sponsor of trips to Israel in the world, to take a stand against a new law that would deny entry to foreigners who support boycotting the country, even if the boycott is restricted to West Bank settlements.

In a letter to senior executives at the program, the students are demanding responses to three questions: Does Birthright intend to impose a screening process to vet applicants according to their views on the boycott, divestment and sanctions movement, the settlements and other political issues? If participants are turned back at Ben-Gurion Airport because of the new law, will Birthright provide them with assistance and support? Has Birthright been in touch with the Israeli program about how the new law will affect participation in its trips?

“Given these complications,” they ask, “will you continue to allow those of us who choose not to purchase settlement products as a personal choice to participate on Birthright?”

The letter, obtained by Haaretz, was signed by 575 students representing 97 colleges and universities across the United States, as well as three high schools. It was sent just before Passover  to Izzy Tapoohi and Gidi Mark, Birthright’s top executives, as well as several tour operators with which the organization works. The signatories included both students who have already participated in Birthright trips as well as those who plan to.

Behind the initiative is J Street U, the student arm of J Street, a pro-Israel, anti-occupation organization. About 25 percent of the students who signed the letter, however, have no affiliation whatsoever with the organization.

Responding to questions, Birthright cited the FAQ section on its website, where one question is whether applicants’ political views are taken into account when determining eligibility. According to the answer, which has not undergone any revision since the new Israeli law was passed: “Birthright Israel does not inquire about the political views of its applicants and welcomes all Jewish young adults from around the globe to visit Israel.”

Birthright would not say whether it would support and assist participants on its trips who might be turned away at the airport or whether it had been in touch with the Israeli government about the ramifications of the new law on participation.

The protest comes a few weeks before many universities and colleges go on summer break, the high season for Birthright trips. Birthright typically brings tens of thousand of Jews from around the world, the overwhelming majority from the United States, on its free 10-day trips to Israel each year, most of them during the summer. Birthright says it plans to bring 30,000 participants to Israel this summer.

“While we represent pro-Israel students from across the political spectrum,” the students write, “we recognize that there is nothing anti-Israel about opposing settlement expansion. Indeed, 78 percent of American Jews would like to see Israel limit or halt settlement expansion. Most of us oppose settlement expansion as part of our support for a two-state solution − the only way to ensure Israel’s future as the democratic homeland of the Jewish people.”

The students note that Birthright also recognizes the distinction between Israel and the settlements since, as a matter of policy, it avoids travel to the West Bank.

They add that they do not support the global BDS movement, which targets all of Israel, not just the settlements. “Some of us do not buy settlement products as a personal choice,” they write. “Others have no problem doing so. All of us are concerned about the impact of this new legislation on our own and our peers’ ability to travel to Israel.”

The Israel travel ban, passed in the Knesset last month, has drawn widespread condemnation, including from mainstream Jewish organizations such as the American Jewish Committee, the Anti-Defamation League and the Reform movement. Birthright has yet to comment on the law.

The students have not yet received a response from Birthright.

Among the students who helped draft the letter was Rachel Stryer, the co-head of J Street U at Stanford University. “When I heard the law was passed, I was confused, frustrated and very sad about it because it violates everything I knew about Israel being a democracy and committed to freedom of speech,” said Stryer, who plans to go on a Birthright trip this summer after she graduates.

Birthright, she noted, has long prided itself on the wide spectrum of participants it attracts. “I see the new law as directly challenging Birthright’s commitment to this diversity,” she said.

Chase Harrison, a member of the student government at the University of Chicago, has voted several times against initiatives at his school to boycott Israel. At the same time, he said, he felt compelled to sign the letter to Birthright.

“I probably wouldn’t have a problem coming to Israel with my views, but if those who support a boycott are banned, you would be losing important voices in the dialogue − voices that already exist in Israel,” said Harrison, who has already gone on a Birthright trip and serves as an intern at his campus’ Hillel chapter.

Aaron Wildavsky, another student who signed the letter, took part in Birthright two years ago, and plans to move to Israel and join the army after he graduates this summer from Washington University in St. Louis.

“I do not support BDS or a boycott of the settlements, so none of this involves me personally, even though I do have reservations about the settlements,” said Wildavsky, who is active both in Hillel and Chabad.

“The reason I signed this letter is that I think it’s outrageous that the Israeli government can’t handle tourists who take issue with the way it governs in the West Bank. If you’re going to get that aggressively defensive about those who disagree with your policies, to me, it’s like a kid throwing a tantrum.”

Another signatory with no connection to J Street U is Max Buchdahl, the president of the Hillel chapter at Temple University.

“I was very disturbed by the new law and thought it was important to have Birthright come out with a response expressing its support for those with other opinions,” he said. “You might not like certain opinions, but you get into dangerous waters when you start banning people because of their opinions.”

Since its establishment in 1999, Birthright has brought more than 500,000 young Jewish adults to Israel. Most of the participants in the program are college-age students. The program’s largest benefactor is billionaire casino magnate and Republican mega-donor Sheldon Adelson.