Is Bibi On The Outs With Sheldon Adelson? 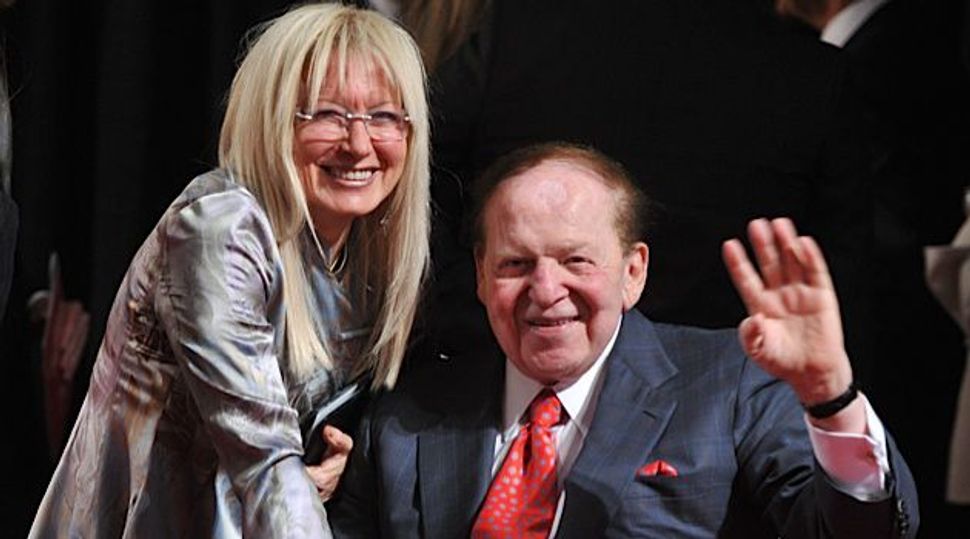 Republican mega-donor Sheldon Adelson is a frequent visitor to Israel, dropping in on his private jet, schmoozing with the country’s top leaders, checking in on philanthropic projects.

But last month, a day after he attended ceremonial events with visiting U.S. president Donald Trump, Sheldon Adelson made an unusual stop – at the offices of the Israelis national police unit investigating corruption allegations against Prime Minister Netanyahu. Adelson and his wife Miriam were questioned again at the Israeli police offices on Monday, spending several hours with investigators.

Adelson, who was not investigated as a suspect in the case, was asked about an ongoing investigation into charges that Netanyahu had negotiated a quid-pro-quo deal with the publisher of Israel’s leading daily Yeditoth Ahronot. The deal would ensure positive coverage for Netanyahu in return for him advancing legislation that would curb the circulation of the Adelson-owned Israel Hayom newspaper, Yediot’s main rival.

Adelson, according to press reports, told police he had no knowledge of these conversations and that Netanyahu did not reach out to him after meeting with Yediot’s publisher.

This testimony may prove valuable for Netanyahu when Israel’s Attorney General is asked to decide whether to press charges in this case. But it does not mean that relations between the Las Vegas donor and the Israeli leader are all rosy. In fact, news reports suggest that Adelson and Netanyahu’s close friendship hit a rocky patch and that Adelson could be looking for his own independent path in influencing Israeli politics.

It is more than a hunch.

Since Israel Hayom appointed last month a new editor, Boaz Bismuth, who reportedly was hand picked by the Adelsons, the newspaper, once considered Netanyahu’s mouthpiece, has dramatically downsized the coverage of the Israeli prime minister and his wife. A study conducted by an Israeli media analysis firm and published in the Hebrew language website Walla found that in Bismuth’s first six weeks as chief editor, Israel Hayom mentioned Netanyahu 190 times, compared to 542 times in the same time period a year earlier.

Netanyahu’s wife Sara was mentioned only 11 times. A year ago she received ten times the mentions in the paper. Another analysis found that since the change of editors at the helm of Adelson’s paper, the number of photos of Netanyahu and his wife has dropped significantly.

What does this shift mean?

Most commentators in Israel believe it represents Adelson’s displeasure with Netanyahu, stemming, in large, from his understanding that the Israeli leader was more than willing to throw Adelson’s paper under the bus in order to mend fences with Israel’s other major daily newspaper. In leaked tapes from Netanyahu’s conversations with Arnon Mozes, Yedioth’s publisher, Netanyahu is said to refer to Adelson as the “gingi,” an Israeli slang word for red head, and to speak disparagingly about Israel Hayom.

Signs of a rift between Adelson and Netanyahu are abundant.

A note by a close ally of Netanyahu, reported on an Israeli investigative TV show, stated that the Adelsons are not please with Netanyahu’s conduct. It also listed Israel Hayom’s previous editor, a senior columnist and an investigative reporter as three people who have raised Sheldon and Miriam Adelson’s ire. All three have since been fired.

In another hint that relations aren’t as warm as in the past, Adelson’s private lawyer in Israel, Dori Klagsbald, recently took on the representation of Israel’s new public broadcasting corporation in a legal challenge it mounted against Netanyahu. “Trouble in paradise,” is how Haaretz’s political commentator Yossi Verter described Netanyahu and Adelson’s current state of relations, noting that Klagsbald would have never taken on a case against Bibi without getting a green light from Adelson.

Does Adelson have a new favorite in Israeli politics?

Some believe he does and is signaling his choice across the pages of Israel Hayom.

Naftali Bennett, leader of the right-wing Jewish Home party, is getting increasingly favorable coverage in Adelson’s paper, at a time that Netanyahu and his wife are finding it hard to make it to the paper’s front page.

Is Bibi On The Outs With Sheldon Adelson?