American Jews Are Furious About The Western Wall — But What Can They Do? 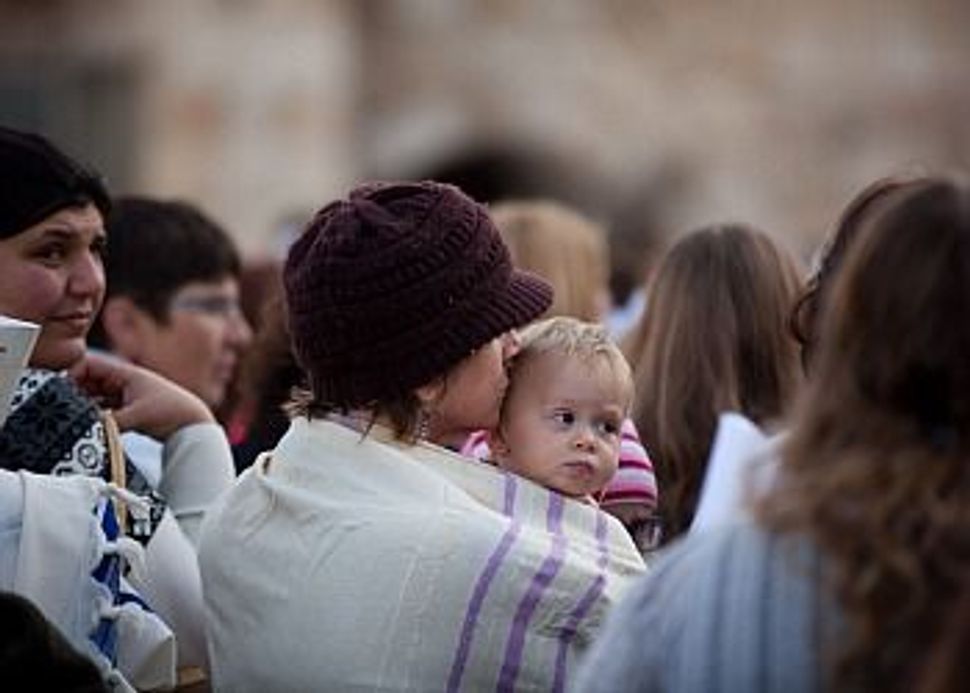 A woman holds her baby as members of the religious group Women of the Wall pray at the Western Wall on April 11, 2013. Image by Getty Images

Not this week. On Monday, an angry Steven Nasatir, president of Chicago’s Jewish federation, left Netanyahu’s office feeling angry and vowing that his community would be assembling a blacklist of those Israeli officials who supported two controversial new measures: one withdrawing from a deal to allow egalitarian prayer at the Western Wall, and another that would make the Orthodox rabbinate the sole authority on conversions in Israel. Anybody who did, he said, would get the cold shoulder from the Windy City’s Jews.

“God bless ‘em, but they’re not welcome in our community, period,” he told The Times of Israel.

Nasatir is not alone. American Jewish leaders, enraged by the actions of Netanyahu’s government, are actively looking for ways to express their anger and to channel communal frustration into action against the Israeli decision. But the American Jewish community doesn’t have any real leverage over Netanyahu in the near term.

“Do American donors have the ability to influence Israeli politics? No,” stated Avrum Lapin, a consultant working with many Jewish philanthropies.

Decades ago, a donor boycott may have had a real impact. Israel was viewed by Jewish Americans as a general philanthropic cause, one that was included in their annual check to their federation, which, in turn, passed it on to the Jewish Agency for funding purposes in Israel in close collaboration with the government.

Now, giving is directed at specific projects, from universities and hospitals to soup kitchens and playgrounds. While no official figures exist, according to estimates American Jewish contributions to Israel reach about 10 billion shekels, or $2.5 billion, a year. But this impressive figure is divided between thousands of causes and programs.

“It’s tricky, because philanthropy doesn’t fund the government,” said Andres Spokoiny, president and CEO of the Jewish Funders Network, an umbrella organization that works with numerous Jewish philanthropies. “So who are you punishing by cutting funds? Not Bibi [Netanyahu], but programs on the ground.”

That means leaders infuriated by Netanyahu’s move are considering politics — not philanthropy — as a means of exploiting recent events with the goal of launching a long-term effort aimed at changing Israel’s political landscape.

“You need to get into Israeli politics, there’s no other way,” said Gur Alroey, head of the Ruderman Program for American Jewish studies at the University of Haifa. “The Israeli liberal-pluralist camp needs help, and it has to come from American Jewry. You shouldn’t be afraid to intervene in Israeli politics.”

This would be a bold move for a community that has been careful not to be seen as interfering in Israeli politics and has feared the perception of using its purse strings to force the hand of Israeli elected officials.

“Israel is a democratic society and the people of Israel elect their officials just like we elect ours,” said Susie Gelman, a former president of the Jewish Federation of Greater Washington who has held leadership positions in many Jewish philanthropies. “American Jews will continue to respect the Israeli democratic process.”

But even within these boundaries, American Jews might finally be poised to get more involved in the Israeli political process on issues relating to religious pluralism. Alroey suggests a future in which politicians reflecting the views of American Jews will serve as a tiebreaker in Israeli politics, just as the ultra-Orthodox parties currently do.

“If you want to influence policies of the Israeli government, you have to play the long game,” said Mark Charendoff, president of the private grant-making organization the Maimonides Fund. “You need to make a decision that this is a priority and that even though it may take 20 years, we’re starting the clock now.”

Such a shift would focus Jewish charitable dollars on the specific political cause of advancing religious pluralism by supporting politicians who are committed to the issue, forming and funding grassroots organizations and funding campaigns, all to make these American concerns matter to Israeli voters as well. It won’t be easy; interest in the Western Wall debate has already ebbed in Israel. Conventional wisdom says the broader Israeli public does not feel strongly about Jewish religious pluralism.

But Diaspora leaders do.

“People are finding their voice. Many communal leaders see this as the bridge they are going to fight for,” Spokoiny said. “This is felt as a betrayal,” he said in reference to the dismantling of the Western Wall deal. “There’s a feeling American Jews are taken for granted and sacrificed for political expediency.”

American Jews Are Furious About The Western Wall — But What Can They Do?