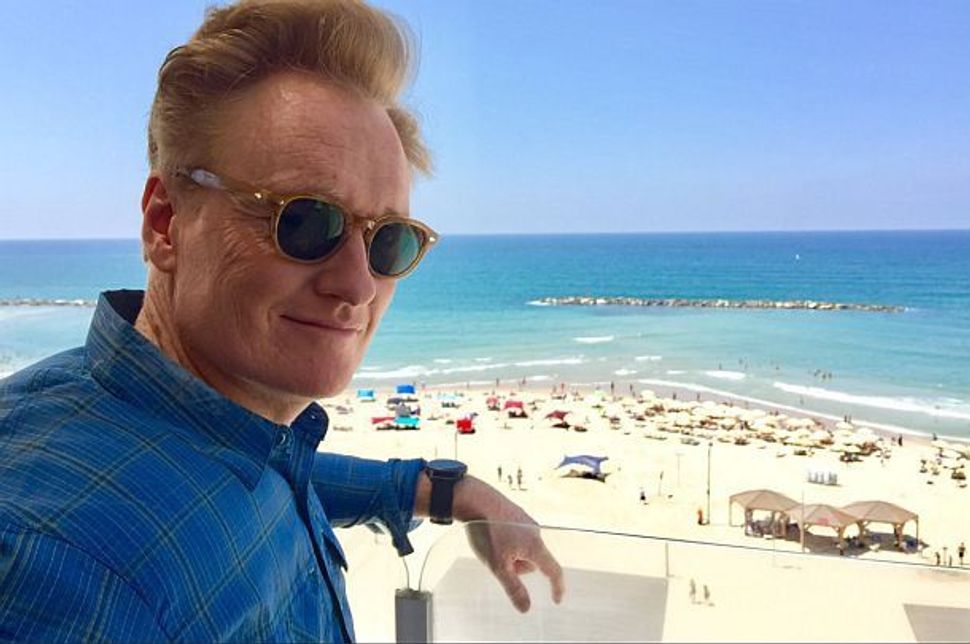 Conan O’Brien enjoys the Tel Aviv beach while filming a special for his TBS show. Image by Facebook

TEL AVIV (JTA) – Conan O’Brien, in Israel for the first time to film a special episode of his TBS talk show, has quickly won local fans.

Since arriving in the country Friday, O’Brien has been hanging out in Tel Aviv. Widely shared posts on Hebrew social media show him chumming it up with Israelis and complimenting their humor, looks and food.

In a Facebook video shot Saturday in Jaffa, in south Tel Aviv, O’Brien flatters his hosts as “fantastic, really funny, nice people,” adding, “All the men are incredibly buff, and the women are beautiful.”

To underscore the point, he growls at a young Israeli woman nearby, a signature Conan expression of attraction.

Returning to Israeli men, he says, “A lot of men in speedos, if that’s your thing. Fortunately for me, it is.”

Despite needing help with the pronunciation, O’Brien offers high praise for shakshuka, the Middle Eastern breakfast dish of eggs poached in tomato sauce, advising, “You gotta get yourself some shakshuka, and get it today.”

Although O’Brien describes Tel Aviv as “absolutely gorgeous,” and says he went for a run along the waterfront, he complains about the summer heat, saying, “I’m like a vampire. When the sun comes up here, I just start shrieking and hissing.”

With the temperature in the city reaching 90 humid degrees over the weekend, many Israelis can relate to that criticism.

O’Brien will reportedly spend five days in Israel shooting his international special “Conan Without Borders.” He said in the video that he would visit Jerusalem and Bethlehem, and employees at the new Setai hotel on the Sea of Galilee told JTA he had booked rooms there for later in the week.

Not content to watch O’Brien’s video about them, which has been viewed more than 400,000 times, Israelis have been posting photos of their interactions with the comedian, too.

“Every second word cracked everyone up.. He really knows how to be a celebrity, so accessible and friendly,” one man wrote in a Facebook post that included photos of him with O’Brien. “He stops cars in the streets and starts talking to the drivers, shouting Shabbat shalom to passersby in broken Hebrew.”

Another Tel Aviv resident so far as to give O’Brien the shirt off his back. The man posted a Facebook photo of himself wearing the comedian’s blue button down, and O’Brien wearing his T-shirt from the Israeli army. He explained that he had stepped out of his apartment to get a cup of coffee hoping no one would see him in the ripped up old shirt, but “from here to there Conan liked the shirt.”

“What a king,” someone commented.

But at least one Israeli may have been less than charmed by O’Brien’s arrival. In a video he shot in a restroom on his El Al flight to the country, someone can be heard aggressively shaking the door.