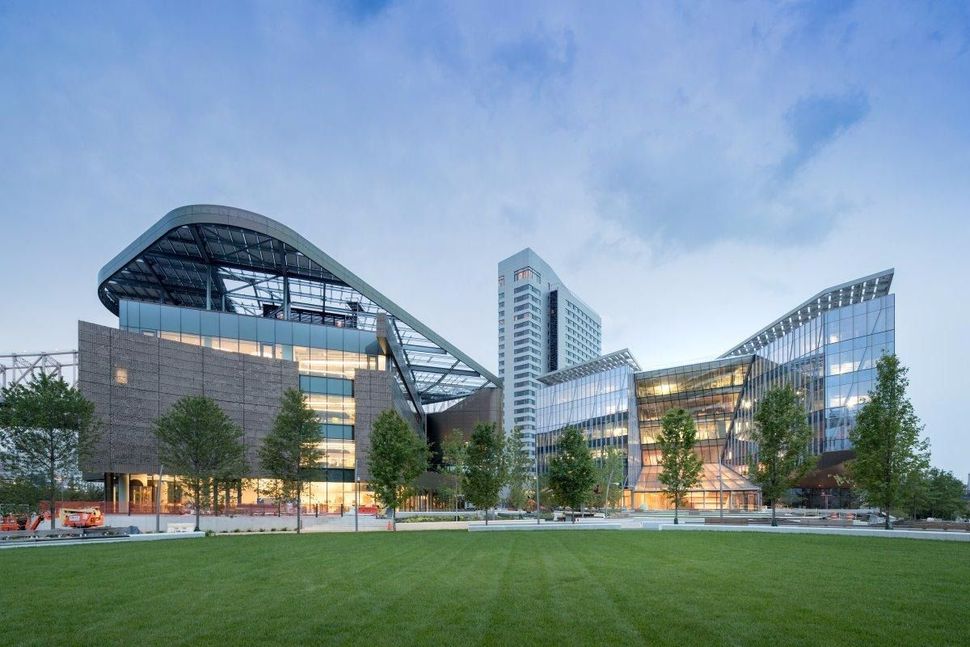 Cornell Tech’s new campus on Roosevelt Island includes a collaboration with the Technion-Israel Institute of Technology. Image by Iwan Baan

A $2 billion high-tech university research campus built by two prestigious universities, one in the United States and one in Israel, of has opened on New York City’s Roosevelt Island.

Cornell Tech, a joint venture between Cornell University and the Technion-Israel Institute of Technology, held its grand opening on Wednesday with remarks by New York Governor Andrew Cuomo, Mayor Bill de Blasio and former mayor Michael Bloomberg, who spearheaded the project while in office and personally donated $100 million towards its construction.

The Forward was offered an exclusive tour of the facilities, led by the school’s dean, Dan Huttenlocher, a member of Amazon’s board of directors who wore the official uniform of the Silicon Valley start-up set: sneakers, jeans, and a blazer over a t-shirt.

Just entering the campus reminds one of Cupertino more than Cambridge: gleaming curved buildings with lots of glass, carefully manicured green spaces alongside ping-pong tables. Huttenlocher said that the design firm — which also planned New York’s High Line elevated park —was most inspired by touring the campus of Pixar (which, because of studio co-founder Steve Jobs, is based in Northern California with a headquarters designed by an architect famous for designing Apple Stores).

The high-tech aesthetic is also present in the Bloomberg Center, the main academic building. The first floor contains classrooms and a cafeteria (where students were already having a Skype meeting about data compression before school even started). The meals themselves might be similar to those found at other universities, but the tech-orientated nature of the site can be found in things like the light bulbs (high-efficiency to reduce electricity costs) and the ceiling (decorated with ones and zeroes to connote binary code).

The other floors hold large open workspaces; professors are assigned breakout rooms but not private offices, in order to increase interactions and collaborations between teachers and students in different academic programs. Glass walls and open ceilings allow people to see colleagues working together all around them.

“It just feels very open,” Ron Brachman, director of the Jacobs Technion-Cornell Institute (the main entity driving collaboration between the two universities) told the Forward. “You can have these serendipitous meetings with people, because there’s so many ways to see other people.”

The building also aims to have a net-zero carbon footprint thanks to solar panels on the roof and geothermal wells underneath the nearby park. The city had set environmental standards when it awarded the land to Cornell Tech, but Huttenlocher said that they went beyond those guidelines “because it’s the right thing to do.”

The other innovative building, called The Bridge, contains a “maker lab” facility, with laser cutters, 3D printers and the like. The Bridge also has private space that it can rent to startups or tech investment firms. It also features a presentation center—which Huttenlocher noted is “always configured a little differently”—where students can give academic presentations or pitch products to investors.

Grad students create real apps and analytic systems for firms as diverse as the health insurance giant Aetna or the chocolatiers Ferrero Rocher, and often use the tech they developed to create their own companies.

The most notable Cornell Tech success story is Nanit, a startup founded in 2014 by an Israeli postdoc. The company, which makes a “smart” baby monitor that uses high-tech cameras and algorithms to track and analyze infants’ sleep and breathing patterns, has 25 employees and more than $6 million in seed funding.

“The research component is done in Israel, and the marketing and production is done [in the U.S.],” Technion president Peretz Lavie explained to the Forward. “This is a new company, a bridge between Israel and the U.S., that emerged because of the collaboration between [the universities].”

Technion professors are full faculty members, and Jacobs Institute graduates get degrees from both universities. Masters students are offered a popular trip to Israel in the winter to meet and work with Technion students and Israeli employees of major American tech firms.

“The close ties that we’ve built, not only with the Technion, but with Israel, the ‘Start-Up Nation,’ the high-tech environment in Israel — that also permeates many things on the campus,” Huttenlocher said.