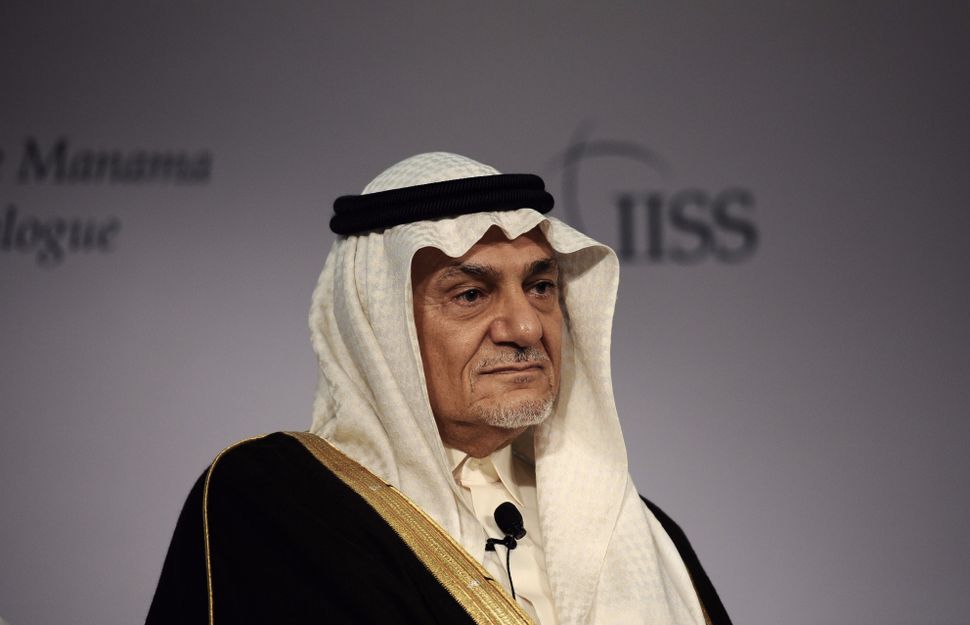 Hopes that Saudi Arabia and the Gulf states will shelve demands for Palestinian statehood and forge open ties with Israel are just a figment of the imagination of Israeli Prime Minister Benjamin Netanyahu, a senior member of the Saudi royal family mockingly told the Forward in an exclusive interview on October 21.

“In many occasions, Mr. Netanyahu pictures issues in a way that would serve an agenda or an idea that he has, and subsequent to that he begins to believe it. I think this is the case on the issue of engaging with Saudi Arabia against Iran,” said Prince Turki al-Faisal, a former Saudi ambassador to Washington and onetime head of that country’s powerful intelligence agency.

Secret defense and commercial contacts between the two sides have been widely reported over the years, both in press accounts and in personal descriptions by Israeli participants in the contacts. One of those Israeli participants, reached by phone after the interview, told the Forward that the prince, like other prominent Saudis, is obliged to publicly deny the secret contacts precisely because they are secret. The Saudis are unwilling to make them public without movement on the Palestinian issue.

Tellingly, two hours after the interview Prince Turki shared the stage with a former head of Israel’s Mossad intelligence agency, Efraim Halevy, along with a former Pentagon official, Michele Flournoy, to kick off a public seminar on Middle East security. Sponsored by the center-left Israel Policy Forum, it took place a Manhattan synagogue, Congregation Emanu-El. It was the former Saudi intelligence chief’s third joint appearance in as many years with a former Israeli intelligence chief, which surely constitutes Saudi-Israeli contact at some level.

Halevy, during his presentation to the packed auditorium, described his own meetings with Arab leaders in the Gulf region in 2002, while heading the Mossad, to learn the details of the newly issued Arab Peace Initiative and convey them to then-prime minister Ariel Sharon. Both men spoke urgently about the initiative and lamented Israel’s failure to accept it as a basis for negotiations.

“It requires Israeli withdrawal from the territories occupied in 1967 and an end to armed conflict, but everything else is negotiable,” Turki told the crowd. “It is still on the table. All the Arab countries are committed to it. I would hope that Mr. Netanyahu will say yes.”

The Arab Peace Initiative, adopted by the Arab League in 2002 and later ratified by the 57-nation Organization of Islamic Cooperation, offers Israel full peace, normal relations and an end to the Arab-Israeli conflict in return for Israeli withdrawal to the pre-1967 armistice lines or their equivalent, establishment of a Palestinian state and a “just” and “agreed” solution to the Palestinian refugee issue. It has been re-ratified by Arab League summits as recently as 2013.

Turki, 72, currently heads a charitable foundation named after his late father, King Faisal. Since leaving government in 2007, Turki has emerged as the kingdom’s most visible advocate of Israeli-Palestinian and broader Israeli-Arab peace efforts.

Asked by the Forward about published accounts of private Saudi foundation money going to promote extremist Islamic teaching in other countries, he angrily referred to the 9/11 Report, noting that it had cleared the kingdom of any link to the atrocity.

His visit comes at a time when Saudi Arabia is engaged in a power struggle with Iran over regional dominance and in the midst of a Saudi-led effort to isolate Qatar, which it views as an ally of Iran and of extremists forces. Saudis are watching with growing concern Iran’s growing influence in Yemen and in Syria and are looking to Washington for help in curbing Tehran’s race to becoming the leading Muslim force in the Middle East. As such, Saudi Arabia was the first, right after Israel, to congratulate President Trump for his October 13 speech announcing a change in policy toward Iran and a call to change the terms of the nuclear deal.

Turki is full of praise for Trump, who made Saudi Arabia the destination of his first foreign visit as president. “It was a win-win visit by the president,” Turki said. “Him choosing the kingdom as his first destination and, of course, the kingdom receiving him not only as the leader of the US but as someone who is reaching out not just to Saudi Arabia but to the all of the Muslim countries.”

This praise stands in stark contrast to the Saudi view of former president Barack Obama, who by the end of his term had been viewed with suspicion by leaders of the House of Saud because of the Iranian nuclear deal and Obama’s refusal to engage in Syria. “Mr. Obama had relations with Saudi Arabia that had their ups and downs,” said Turki, a seasoned diplomat who, with perfect English and with doors open for him in all world capitals, has served for years as the face of Saudi foreign relations in the West. “The ‘red line’ issue indicated that President Obama had a different view on how to take care of Syria, and, of course, on that issue, the kingdom disagreed with Mr. Obama,” Turki said, referring to Obama’s declaration that the use of chemical weapons by Syrian president Bashar al Assad would cross a “red line” and trigger military response, only to later rescind on this threat.

In the interview, Turki expressed his country’s concern over a recent American piece of legislation that had drawn little attention in the United States. The Justice Against Sponsors of Terror Act, or JASTA, approved in September 2016 after a congressional override of Obama’s veto, limits foreign sovereignty immunity and makes it easier for Americans to sue foreign nations for involvement in terror. It was designed with Saudi Arabia in mind and there is already a pending class action suit against Saudi Arabia alleging the kingdom enabled the 9/11 terror attacks by Al Qaeda. “It’s alarming and it’s harmful to the relations,” Turki said, warning that the law could backfire and lead to a wave of lawsuits against U.S. officials and military personnel around the world. To Jewish Americans who lobbied in favor of passing JASTA, Turki has a similar warning: “They’ll be opening Pandora’s Box to Israel being sued by citizens not just in the United States but wherever they might be,” he said. “Nobody actually benefits from this law.”