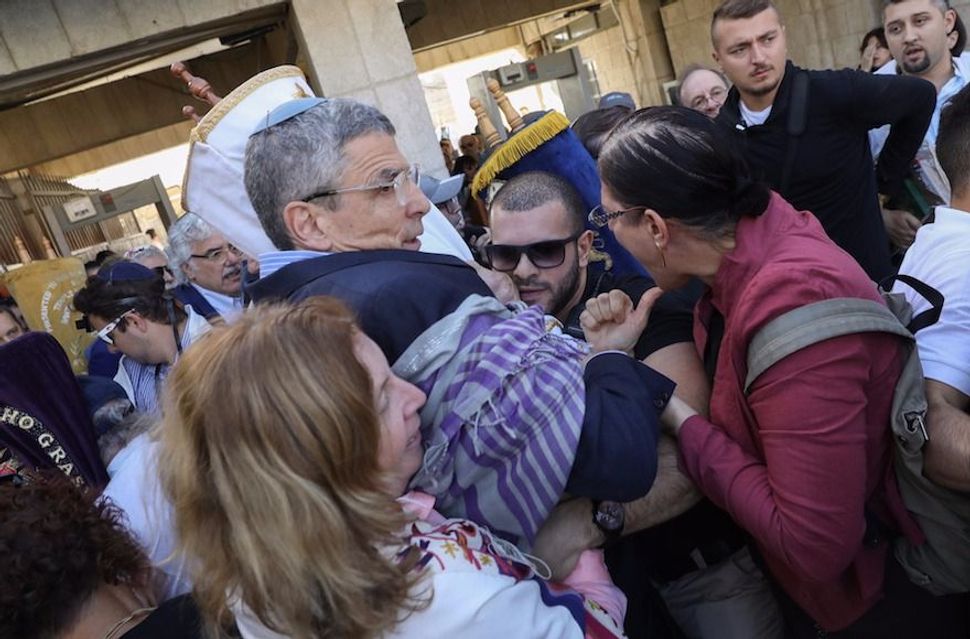 The sky was cloudless when the group gathered in the Old City of Jerusalem on Thursday morning to celebrate the ordination of four new Reform rabbis. But when they tried to enter the Western Wall complex, security guards physically accosted them, attempting to keep them from bringing Torahs onto the main plaza.

In the ensuing chaos, Rabbi Rick Jacobs, president of the Union for Reform Judaism, the largest Jewish denomination in the United States, was nearly maced. Another rabbi was thrown to the ground. A student of Hebrew Union College-Jewish Institute of Religion was struck in the head and required medical attention.

And in a truly only-in-Israel moment, one of the security guards briefly stopped barricading one of the Torah bearers to put his hand to the Torah — before bringing it to his lips.

The episode was the latest clash among security guards, ultra-Orthodox men and non-Orthodox groups at Judaism’s holiest site. The rabbinic authority that controls the Western Wall gives out Torahs to visiting groups that follow its rules, like not letting women touch the scrolls. In protest, groups like Women of the Wall and other Conservative and Reform contingents bring their own, leading to increasingly violent showdowns.

“Today was a joyful day, it was a milestone, and it was marred by the aggressive, violent response from the guards,” Jacobs said.

According to multiple witnesses, a security guard held a can of mace inches from Jacobs’s face and threatened to spray him with it.

“I just looked at him and said, ‘I got a Torah scroll in my arms, we’re coming here to pray — what in the world are you thinking?’” Jacobs recalled.

Earlier this month, rabbis protesting the rules against egalitarian services were pulled to the ground by Haredi men trying to rob them of their Torahs. Israel’s Supreme Court issued a ruling this week questioning why security forces at the Wall are not doing more to protect non-Orthodox workers.

Shmuel Rabinovitch, a Haredi rabbi who serves as the overseer of the Western Wall and other religious sites, could not be reached for comment.

He has called the actions of groups like the URJ and Women of the Wall a “plague” and incitement to a “civil war.” After similarly violent clashes earlier this month, Rabinovitch protested what he deemed misuse of Torah scrolls.

“The heart is broken at the sight of Torah scrolls, the holiest of holies, bandied about like signs at a protest,” he told The Jewish Chronicle, the United Kingdom’s primary Jewish publication. “Never has there been such a thing.”

Thursday’s altercation came during day-long festivities for the ordination of the 100th Israeli Reform rabbi. The United States’ biggest non-Orthodox movements — Conservative and Reform Judaism — both have homegrown outposts in Israel.

Rabbi Naamah Kelman-Ezrahi, dean of HUC-JIR, said that while some students were surprised by the guards’ “ferocity,” others who had encountered similarly violent pushback before knew what to expect.

“As one student who read Torah told me, ‘I am in my element, and I’m ready for this,’” Kelman-Ezrahi said in an interview.

It is not clear whether the rabbinical student who hit her head was struck by security guards or by one of the Haredi men who tried to take the scrolls from Jacobs and the other Torah bearers in the group. Kelman-Ezrahi said the student is now resting and does not appear to have suffered a serious injury.

The group was able to make it through the security checkpoint after the 15-minute altercation. Haredi protesters gathered around the group to yell curses as they read Torah near the plaza’s flagpole. On their way out, Gilad Kariv, executive director of the Reform movement in Israel, was detained by police and questioned about the incident.

“I told the policeman who questioned me that he should feel free to arrest me so that we can fight this out in court,” Kariv told Haaretz. “He obviously didn’t take up my offer.”

The clash at the Western Wall comes after a summer where Jewish leaders all over the world are bemoaning the widening divide between Israel and Diaspora communities. In July Israel’s chief rabbinate released a blacklist of rabbis it does not trust to confirm the Jewish identity of immigrants. The list included leaders of all denominations. Prime Minister Benjamin Netanyahu has largely avoided interacting with American rabbis who are critical of his unwillingness to create a compromise for the Western Wall plaza or address other demands from non-Orthodox leaders.

Major Jewish philanthropists with strong ties to Israel have been searching for ways to influence the government on social and religious equality issues. But analysts say they have little leverage over Netanyahu, since most philanthropic giving — estimated at over $2.5 billion each year from the U.S. — is divided between thousands of causes and programs, and not given directly to the government.

Anat Hoffman, leader of Women at the Wall, a group that organizes regular prayer services for women at the Western Wall plaza, was one of the Torah bearers for the group. She said she is worried about the increasingly violent opposition to egalitarian services at the Wall. At a recent Women of the Wall prayer service, Hoffman said a Haredi man brandished a knife at the group.

“The way things are now, the writing’s on the wall — this is gonna end in bloodshed,” she said. “We are sitting ducks.”

Correction, November 17, 2017, 7:50 AM — This article has been updated to reflect the that four rabbis were ordained Thursday, bot three.