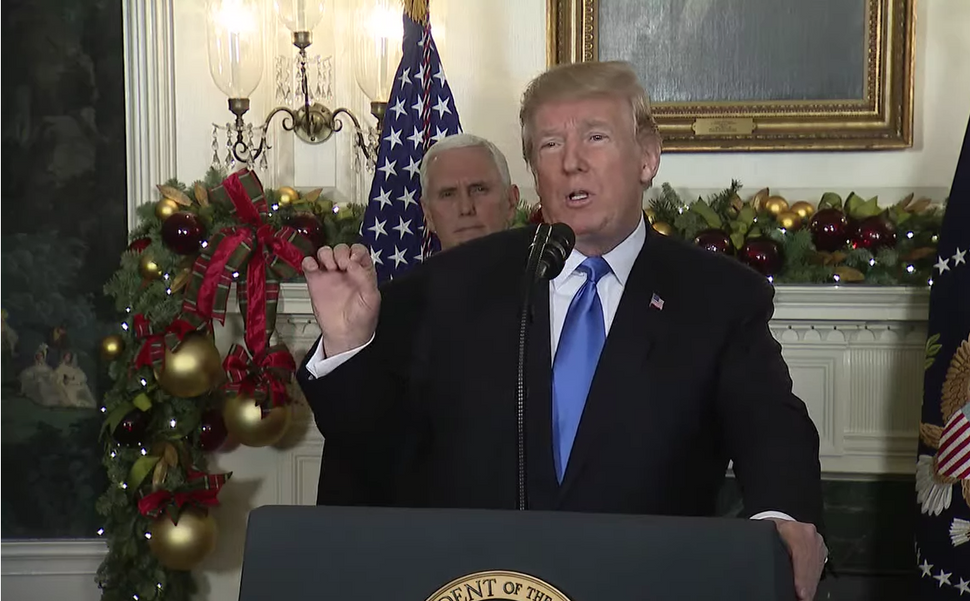 WASHINGTON (JTA) — In announcing U.S. recognition of Jerusalem as Israel’s capital, President Donald Trump spoke loud and clear — except when he didn’t.

That’s not to say that Israel and many of its supporters weren’t thrilled with what many called the “long overdue” acknowledgement by the United States that Israel gets to say where its own capital is. But Trump was cautious, celebrating Israel’s control of the entire city, yet insisting that he was not recognizing Israel’s control of the entire city; taking Israel’s side on a decades-long dispute, but also saying that “we are not taking a position of any final status issues.”

Here are a few other things the president said and didn’t say.

The announcement is a significant break with his predecessors.

Congress recognized Jerusalem as Israel’s capital in 1995, but the executive branch until now has taken pains — all the way up to the Supreme Court — to resist doing the same. In the wake of the 1949 armistice, the U.S. administration officially sought international status for Jerusalem. After peace talks with the Palestinians began in the early 1990s, the position shifted to leaving it up to the sides to decide what the final status of the city should be. Since then, Trump’s predecessors have signed twice-yearly waivers keeping the U.S. Embassy in Tel Aviv.

Trump is the first president to unreservedly embrace the 1995 law.

The president seemed to embrace a narrative of Israeli stewardship of the entire city that might have been written in the office of Israeli Prime Minister Benjamin Netanyahu: It’s not just good for Israel, or for the Jews, it’s good for the city and those who love it.

“Jerusalem is not just the heart of three great religions, but it is now also the heart of one of the most successful democracies in the world,” Trump said. “Over the past seven decades, the Israeli people have built a country where Jews, Muslims and Christians, and people of all faiths are free to live and worship according to their conscience and according to their beliefs. Jerusalem is today, and must remain, a place where Jews pray at the Western Wall, where Christians walk the Stations of the Cross, and where Muslims worship at Al-Aqsa mosque.”

That’s not a narrative that Palestinians would countenance; they say restrictive security measures keep Muslims and Christians from easily reaching holy sites.

A letter Wednesday from 13 leaders of Jerusalem churches, representing the range of faiths in the holy city, reflected a far less rosy picture of interfaith relations there. It urged Trump not to recognize Jerusalem as Israel’s capital, saying that tensions in the city argue against such a recognition.

“The Holy City can be shared and fully enjoyed once a political process helps liberate the hearts of all people, that live within it, from the conditions of conflict and destructiveness that they are experiencing,” the letter said.

The announcement sets a precedent for others.

Until 1980, a dozen or so nations recognized Jerusalem as Israel’s capital and kept embassies in or near the city. That year, Israel passed one of several laws that claimed the entire city as its capital. Countries with embassies in the city, unable to withstand pressure from the Arab world, pulled out.

This isn’t the final say on Jerusalem.

Once peace talks were launched by Israel and the Palestinians in 1993, the U.S. position has been that the sides should hash out what the boundaries are in and around Jerusalem. Since the Camp David talks in 2000, the operating presumption among U.S. negotiators has been that Israel and Palestine would share the city, with an international arrangement at the most sensitive sites in the Old City. In recent years, however, Netanyahu has insisted that the city will remain “undivided” under Israeli control.

“Undivided” and its synonyms did not make an appearance in Trump’s remarks. Instead, he said, work out the borders yourselves.

“We are not taking a position of any final status issues, including the specific boundaries of the Israeli sovereignty in Jerusalem or the resolution of contested borders,” he said. “Those questions are up to the parties involved.”

Trump, as noted, said he was directing the State Department to start planning the embassy’s move to Jerusalem. Top aides, speaking the previous evening to reporters, said it would take years for such a move — perhaps close to a decade — and that no one had been scouting for sites.

“I call on all parties to maintain the status quo at Jerusalem’s holy sites, including the Temple Mount, also known as Haram al-Sharif,” Trump said.

The status quo on the Temple Mount — holy to Muslims and Jews — right now is that the Wakf, a Muslim authority that Israel’s government sees as hypernationalist, controls access. Jordan also has a say in its running.

Netanyahu, who has resisted right-wing members of Israel’s governing coalition who want to ease access for Jewish worshippers, is all about maintaining the status quo. Still, Trump cautioning him to keep it that way — and in language that his predecessors have used — must sound awfully familiar.

Trump couldn’t resist a dig at his predecessors.

“Presidents issued these waivers under the belief that delaying the recognition of Jerusalem would advance the cause of peace,” Trump said, referring to the waiver option, renewable every six months, built into the 1995 law. “Some say they lacked courage, but they made their best judgments based on facts as they understood them at the time.”

Got that? Maybe it was a lack of guts, but let’s be generous — it may just have been a lack of smarts.

“While previous presidents have made this a major campaign promise, they failed to deliver,” Trump said. “Today, I am delivering.”