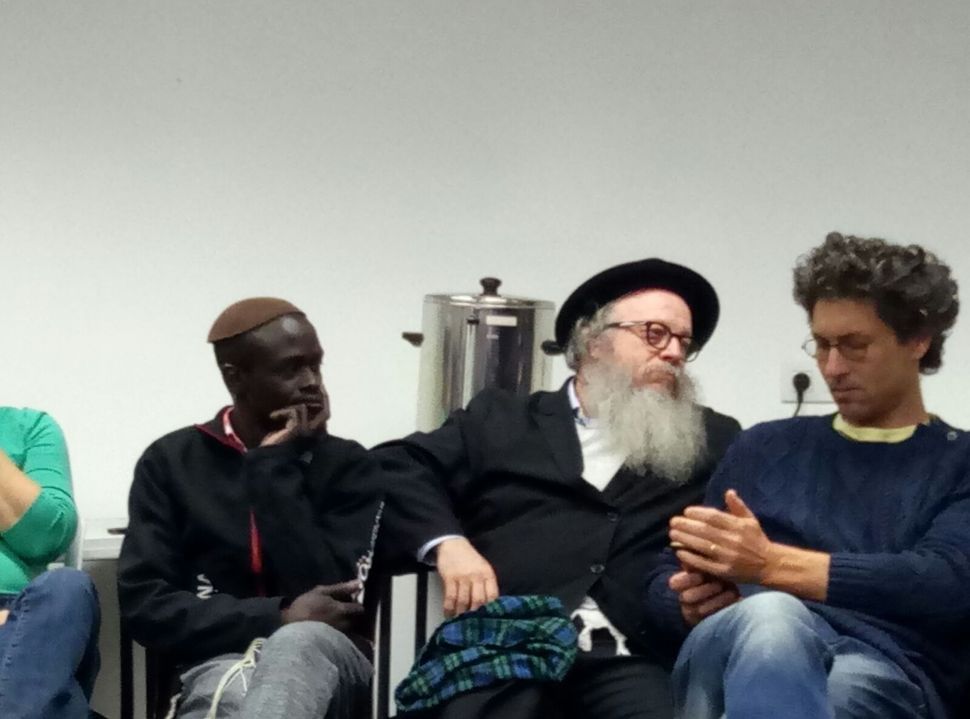 Michael Abdurhama, 23, attended a recent meeting in Jerusalem called to help asylum seekers like him who are under threat of deportation. Image by Linda Gradstein

In the basement of a synagogue in Jerusalem, almost 100 people have turned out on a cold and rainy January night to hear about what they can do to help African asylum-seekers in Israel who are in danger of being deported.

The point of the gathering is to sign up families, many of them English-speaking immigrants, who are willing to support a certain group of about 360 young male asylum-seekers with everything from Shabbat invitations to help with navigating the Israeli bureaucracy.

“These are people who came here and asked for asylum,” said Tamar Elad-Appelbaum, rabbi of Zion: An Eretz Israeli Congregation. “We have an opportunity to do the mitzvah of ‘You shall love the stranger.’ These young men never lost hope. They believe in us.”

These grassroots initiatives are gathering steam since the Israeli government announced its decision to deport many of its 37,000 migrants. The government has begun by issuing deportation orders to up to 10,000 men when they go to renew their two-month visa. The men are told they have two months to leave Israel and if they refuse, they will be imprisoned.

Three rabbis, including Susan Silverman, sister of the famous Jewish comedian Sarah Silverman, are spearheading another campaign. The rabbis are asking Israelis to sign up as sanctuary families if the asylum-seekers choose to hide from the Israeli government officials trying to force them to leave.

“We are faced with a moral, immediate and emergency choice,” Silverman told the Forward. “We are about to see thousands of people deported from our country to trafficking, to death and to the refugee trail. This was a moment where we needed to rise up.”

Among those who gathered at Kehilat Zion to try to help the migrants was also one of the young men who needs that help: Michael Abdurhama, 23, who came to Israel from Darfur, Sudan, as an orphan in 2008. He does not like to talk about what happened in Darfur, where his parents were killed, or about his journey, during which Egyptian forces shot him.

He arrived in Israel without parents and was sent to Youth Aliyah high schools in Israel. He speaks Hebrew fluently and is studying Judaism, hoping to convert. 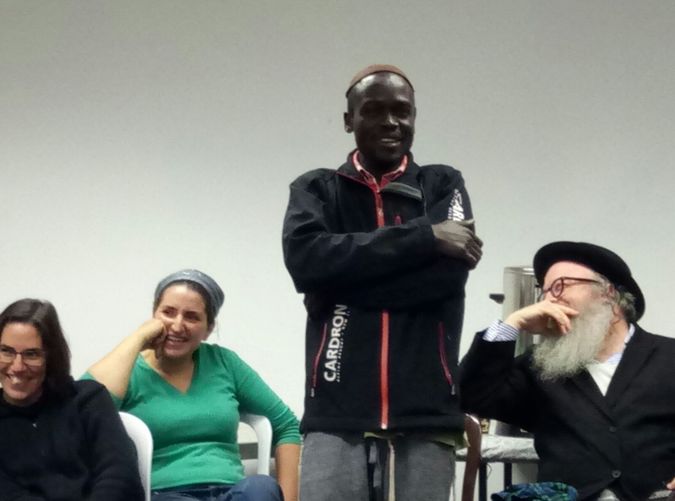 Israelis are gathering to try to support African migrants like Michael Abdurhama, 23, an orphaned asylum seeker. Image by Linda Gradstein

Two years ago, Avital Hochstein, a Talmud teacher, and Yisrael Campbell, a comedian, “adopted” him. The couple is based in Jerusalem. Campbell says Abdurhama has been a welcome addition to their family and has developed close relationships with their four children. Abdurhama agrees.

“My relationship with them is so strong — I am like their kid,” Abdurhama told the Forward. “They give me whatever I need — whether it’s money, clothes, food, blankets or a radiator. I cry when I think about how much they give me.”

Each week, he says, Hochstein calls with a Shabbat invitation. But he can’t always accept.

“All of the families are fighting over me,” he said, laughing. “They all want me to come for Shabbat.”

Unlike Abdurhama, most of the Africans in Israel are from Eritrea, where men face lifelong military service, or from Sudan. At this point, 5,000 children are exempt from the threat of deportation. However, the Israeli government says that eventually it wants all the “infiltrators,” as it calls them, to leave.

“Israel does not see the majority of these people as refugees — they are economic migrants,” Yonatan Jakubowicz, founding director of Israel Immigration Policy Center, said in a phone call with journalists. “We do not believe these people are in danger if they go back to their home countries or to a third country.”

Campbell attended the Jerusalem event with Abdurhama, looking for more families to volunteer. Campbell himself is a convert to Judaism; he is the star of “Circumcise Me,” a film that describes his three conversions to Judaism — Reform, Conservative and Orthodox.

“I was a stranger in the land of Egypt,” Campbell says, quoting a biblical verse. “At one time I was completely outside and welcomed in deeper and deeper to the Jewish community. They [the asylum-seekers] are here; they are Hebrew speakers and it couldn’t be easier to do the right thing.”

It has been widely reported that the “third country” Jacobovitz alluded to is Rwanda, although local officials there have said they will not accept anyone who is deported against his will. Anyone who agrees to leave Israel will be given free airfare and $3,500, a sum that has already encouraged thousands to leave Israel over the past few years.

Activist groups say that many of those who have gone back to their home countries have faced violence or imprisonment, a claim Israeli officials deny.

All of the 37,000 in Israel now arrived there illegally — paying large sums of money to smugglers to take them from Egypt across the Sinai desert and into the country. Most of them have spent time in Holot, the detention facility that can house up to 25,00 migrants. Israel says it plans to shut down Holot in the next few months.

They have been in a legal limbo in Israel, allowed to perform jobs that most Israelis do not want to do, like cleaning or construction. Their children get free education, but they do not receive government-subsidized medical care. They need to renew their visas every two months.

The vast majority of those currently in Israel have been there for years, and want to stay indefinitely. Jacobovitz says that 14,000 have submitted asylum requests, of which at least 7,000 were declined and 6,000 are still pending. Only a handful have received refugee status.

The planned deportations have sparked outrage in Israel and abroad. A group of El Al pilots wrote on Facebook that they would refuse to fly planes taking deportees to Africa. More than 500 psychologists sent a letter to Israeli Prime Minister Benjamin Netanyahu, saying that forcing them to leave would do psychological harm. A separate group of 350 doctors signed a similar petition.

Opposition has also come from almost 500 academics in Israel, who referred to the deportation and murder of Jews during the Holocaust.

“We must remember that we, too, were once persecuted and victimized,” they wrote, according to a report in Haaretz. “We, too, were once aliens and we should happily embrace refugees who have fled their homeland in order to save their and their families’ lives.”

In the United States, almost 900 Jewish clergy from America and from Canada across the religious spectrum signed a letter asking Netanyahu to change his decision and not deport the asylum-seekers.

In just a few weeks, Miklat Israel has commitments from more than 600 Israelis to house and feed the refugees if needed, Rabbi Susan Silverman said. It is not clear if they will be taking an illegal action. In many countries, including the United States, it is not illegal to offer sanctuary.

“The point of asking people to do this shows the government that the Israeli public has learned from our history and has a sense of Jewish values treating the stranger with dignity and compassion,” Silverman said. “When it’s time for Israel’s 70th anniversary, we hope it won’t be marred by having deported people.”

Linda Gradstein is a freelance journalist based in Jerusalem and a lecturer at New York University-Tel Aviv.