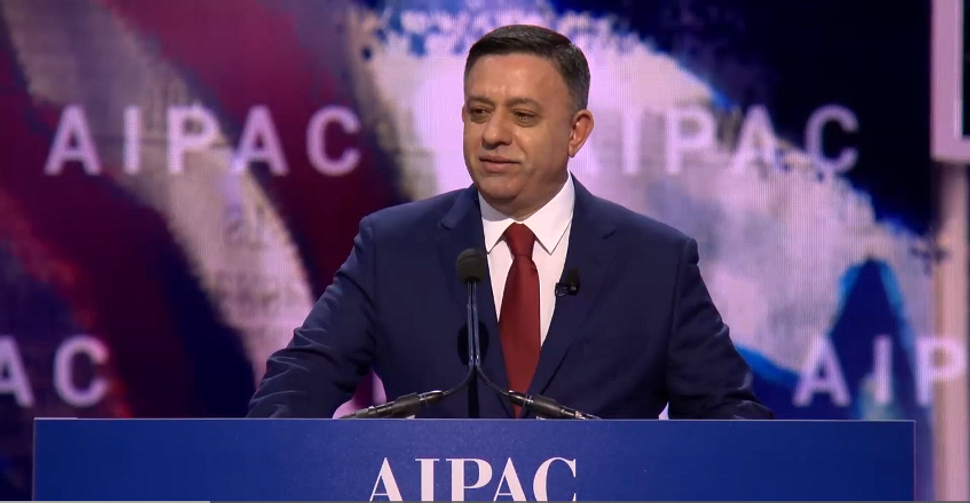 Avi Gabbay was a newcomer to Israeli politics when he stunned the country by winning the Labor Party’s leadership primary last July. For American Jews, Gabbay is still an unknown — he came from the world of business, where contacts with the world’s largest Jewish diaspora community are not a top priority.

Taking the stage at the annual policy conference of the American Israel Public Affairs Committee on Sunday, Gabbay sought to introduce himself by projecting a mainstream worldview, tilting carefully to a dovish stance, but carefully remaining within the Israeli security-minded mainstream.

“We will never compromise on the security of our country,” Gabbay told the 18,000-strong gathering, vowing that if elected prime minister, he will enforce an “aggressive security policy.”

American Jews used to recognize Labor as the party of Yitzhak Rabin and Shimon Peres, who made solving the Israeli-Palestinian peace process the party’s top agenda item. Gabbay offered the AIPAC crowd a different vision. In the eyes of Labor’s new leader, advancing peace is just one important issue, sandwiched between taking a tough stance on national security and promoting the country’s economy by narrowing societal gaps.

But the Labor leader stopped short of offering a peace plan or proposing a possible Israeli withdrawal from the West Bank. Instead, he floated a set of trust-building measures: The Palestinian Authority would stop making payments to terrorists, and Israel would impose limitations on the expansion of Jewish settlements. “We must stop building caravans on hilltops and glorifying remote settlements, because they do not provide any security value to Israel,” he said.

Gabbay steered clear of directly challenging the Israeli government on the issue of the conflict. He also passed on an opportunity to criticize his rival, Prime Minister Benjamin Netanyahu, who is involved in multiple corruption investigations. Instead, Gabbay made only veiled mentions, saying that Israel needs an “economy clear of corruption” and that the people of Israel are “better than some of the news coming out of Israel these days.”

While not directly taking on Netanyahu in front of a pro-Israel Jewish audience, Gabbay tried to engage the crowd with his own personal life story, which stands in stark contrast to Netanyahu’s silver-spoon upbringing.

Gabbay grew up in a family of ten living in an asbestos-packed cabin in a poor neighborhood of Jerusalem. “I was ashamed to tell my friends where I live,” Gabbay said.

He spoke of his parent’s journey from Morocco to Israel, in which they “achieved their Zionist dream.”

And he provided listeners with a rags-to-riches story they could take home with them: His father worked for years as a repairman for the country’s telephone company. Twenty-five years later, Gabbay become the CEO of that same firm, now Israel’s largest telecom business.