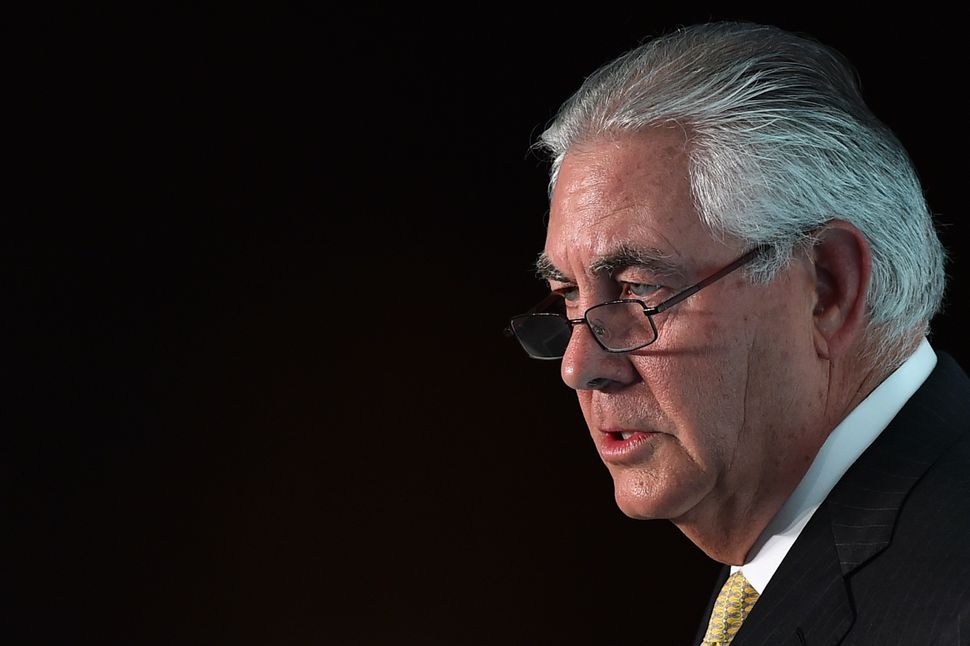 Another dramatic day in the Trump White House opened Tuesday with the firing of Secretary of State Rex Tillerson and the appointment of CIA director Mike Pompeo to replace him.

For Middle East watchers and pro-Israel activists, the reshuffling could also signal some major changes in policy, mainly in regard to America’s posture toward Iran and the nuclear deal signed in 2015.

Here are a few of the points to watch as Tillerson packs his bags and Pompeo prepares for his Senate confirmation hearings.

In brief remarks he made to reporters after the bombshell announcement, President Trump made clear that his main disagreement with Tillerson had to do with U.S. policy toward Iran.

“We disagreed on things,” Trump said. “When you look at the Iran deal – I think it’s terrible, I guess he thinks it was okay. I wanted to either break it or do something and he felt a little bit differently, so we we’re not really thinking the same.”

Trump may have been understating the differences. Tillerson led the opposition within the administration to Trump’s decision to de-certify and later threaten to drop out of the nuclear agreement. Tillerson would have rather seen a negotiated separate agreement with European partners on curbing Iran’s non-nuclear ambitions, instead of a full American withdrawal from the nuclear deal.

Pompeo, on the other hand, has always held a tough position opposing the Iran deal. As a member of Congress, he voted against it and supported repealing it, and as CIA director, he remained highly critical about Iran’s compliance with the deal. With Tillerson out and Pompeo heading the State Department, Trump will have even more freedom to go ahead and withdraw from the deal when the deadline to agree to remain in it arrives in May.

It’s not about the peace process

The Trump administration is getting ready to roll out its peace plan, which is supposed to lead to what Trump calls the “ultimate deal” between Israelis and Palestinians. Pompeo will be inheriting a State Department that has been almost completely sidelined by the White House.

Senior advisors Jared Kushner and Jason Greenblatt, who report directly to Trump, have been traveling throughout the Middle East and had already drafted a peace plan without Tillerson’s input. They are not much more likely to share their plans with Pompeo once he takes office.

Tillerson did have some foreign policy experience based on his previous position as head of Exxon-Mobil, and had personal contacts with Russia’s inner circle and with royal families in the Persian Gulf. But Tillerson came to the job with very little knowledge of Israel, which was of little interest to Exxon as a country with no oil resources to speak of. After 14 months as secretary of state, Tillerson remained largely aloof from Israeli issues, purposely avoiding delving into relations with Jerusalem.

On the other hand, Pompeo visited Israel and met frequently with pro-Israel lobbyists as a member of Congress. “Look for a more traditional conduct of the U.S.-Israel relationship to emerge,” former U.S. ambassador to Israel Dan Shapiro told Jewish Insider.

Right-wingers thought Tillerson was too dovish

Tillerson found himself in the crosshairs of the Zionist Organization of America after issuing the State Department’s annual terrorism report, which mentioned that some Palestinian violence could be attributed to the “lack of hope in achieving Palestinian statehood, Israeli settlement construction in the West Bank,” and other Israeli actions, including aggressive Israeli military tactics. The ZOA demanded Tillerson’s resignation over the report, stating that “the State Department should be draining the swamp and expunging the anti-Israel false and biased pronouncements of the former administration – not making them worse.”

Tillerson has presided over a massive and internally unpopular reorganization of the State Department bureaucracy, with many veteran diplomats choosing to retire. Pro-Israel activists have privately expressed their frustration in the past year over the loss of professional State Department personnel dealing with Israel issues. Tillerson is leaving behind a depleted department, which Pompeo will be tasked with rebuilding. Re-establishing a strong bureaucracy of career diplomats serving under the secretary could help Israeli diplomats and advocates still searching for counterparts in the Trump administration to work with.