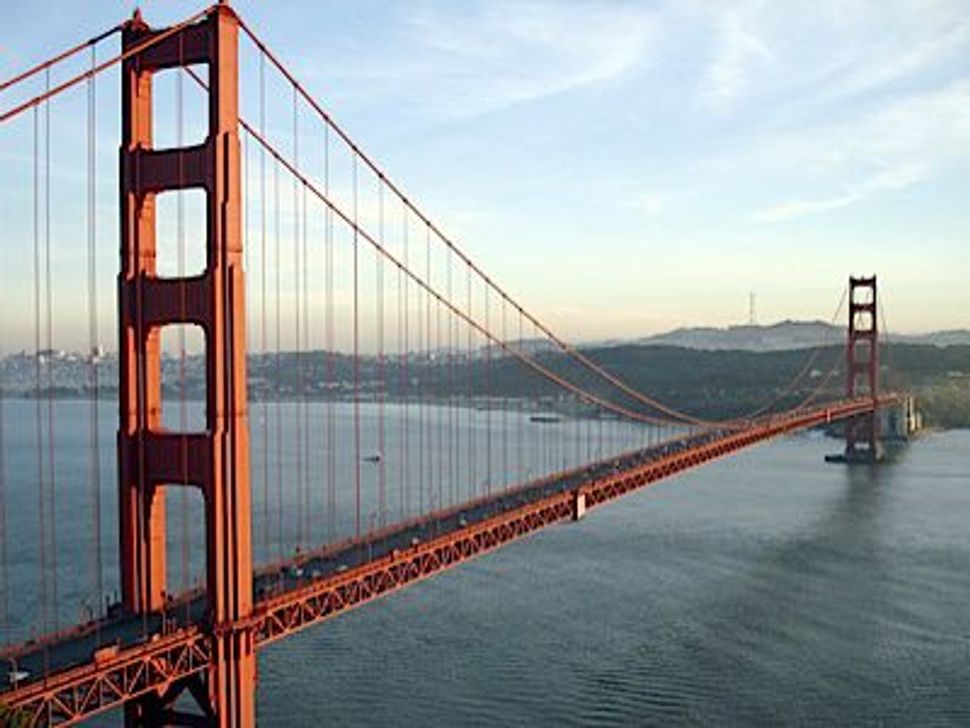 The recent revelation that San Francisco’s Jewish Community Federation funneled $100,000 to the anti-BDS blacklisting website Canary Mission shocked many. But that donation was only one in a long list of controversial far-right fringe causes supported by the federation through one of its largest “supporting foundations” – the Helen Diller Family Foundation.

The federation’s guidelines forbid contributions to organizations that promote bigotry and extremism. However, IRS 990 forms for the years 2014 to 2016 from the foundation – which is how its Canary Mission donation was discovered by the Forward earlier this month – reveal a list of donations to such groups.

These include the highly controversial Project Veritas ($100,000 in 2016), run by conservative activist and provocateur James O’Keefe, who uses stealth videos to try to smear left-wing groups and journalists.

According to the documents, the federation also supported a foundation initiated by populist far-right Dutch politician Geert Wilders ($25,000 in 2015), who has campaigned against the “Islamization” of his country and stopping all Muslim immigration, promoted legislation that would ban the Koran in the Netherlands, and been called an “anti-Muslim bigot” by the ADL.

Both were among beneficiaries of donations from the Diller Foundation, along with gifts to several other groups that have been connected with promoting hate and suspicion of Muslims – as well as political right-wing organizations that have no connection to Israeli or Jewish causes, such as the Tea Party Patriots ($150,000 in 2016).

Another group funded by Diller is the American Freedom Defense Initiative (also known as Stop Islamization of America), which was created by Robert Spencer and Pamela Geller to oppose the alleged spread of Islamic law across the United States. The ADL said the group, which received $150,000 in 2014, “has sought to rouse public fears about a vast Islamic conspiracy to destroy American values.”

“Supporting foundations” like Diller are housed and staffed by the Jewish Community Federation, where they receive the “advantages of a private foundation, including independent identity and structure, board leadership, professional staffing, and administrative and accounting support,” according to the federation’s website.

In response to a query from Haaretz asking for clarification regarding the process of screening donations, Kerry Philp, senior director for strategic marketing and communications for the federation, replied: “We review each grant recommendation at the time that it is submitted to the federation, to determine if the organization adheres to our granting guidelines. This applies to organizations across the political spectrum. We aim to make the best decisions with the information that we have at the time.

“Because organizations are dynamic, an organization that previously received a grant may not be in compliance with our guidelines today, and vice versa,” she continued. “We strengthened the implementation of our review process in 2017 and continue to be committed to executing our grant review with a standard of care in regard to our guidelines.”

The Diller Foundation did not respond to requests for comment for this article.

‘A threat to our community’

San Francisco area chapters of the student group J Street U were engaged in the issue of indirect, guideline-violating federation support for right-wing groups even before the revelation regarding the Diller donation to Canary Mission – whose online dossiers on political activists have been used by Israel to bar some people from entering Israel.

“We weren’t entirely surprised to learn about Canary Mission, given what we know,” said Eva Borgwardt, a senior at Stanford University and currently president of the J Street U National Student Board. “It is pretty clear that the organized Jewish community – unless pushed – is never going to be as rigorous at enforcing boundaries on the right as it is on the left. This comes from an extremely misplaced sense of what is a threat to our community,” she said.

J Street U has previously confronted federation officials over the issue of donations coming from donor-advised funds and supporting foundations of the central philanthropic body for San Francisco’s Jews.

Last year, J Street U activists pressured the federation to address the issue. In an April 2017 meeting, students affiliated with J Street U met with federation CEO Danny Grossman, and confronted him regarding what they saw as a one-sided application of the federation guidelines put in place in 2010.

These guidelines were designed to clarify the types of groups and activities that could receive support from federation or federation-affiliated groups.

The guidelines include a clause that restricts federation funds from going to groups that “endorse or promote anti-Semitism, other forms of bigotry, violence or other extremist views.”

The J Street U representatives, including Borgwardt, complained that the guidelines were being applied solely to left-wing organizations. They noted that donor-advised funds had been barred from supporting events involving groups like Jewish Voice for Peace and American Friends Service Committee, because such organizations support the boycott, divestment and sanctions movement.

The J Street activists gave Grossman a list of donor-advised grants being given under the federation’s auspices, including those to the Center for Security Policy, the David Horowitz Freedom Center and the Middle East Forum. All three groups have been criticized for being allegedly Islamophobic and promoting anti-Arab and anti-Muslim rhetoric and conspiracy theories.

The activists also objected to gifts funneled through the Central Fund of Israel to organizations that support activities connected to Israeli settlements.

“The guidelines state clearly that BDS-supporting organizations aren’t eligible for funding because they work to undermine Israel,” said Zoe Goldblum (Borgwardt’s predecessor) at the meeting, according to a report in Bay Area newspaper J Weekly. “However, organizations from the political right that similarly undermine Israel’s Jewish and democratic future, or support bigotry, seem to be excluded from this framework.”

Six months after that meeting, in November 2017, a series of articles appeared in Haaretz scrutinizing donations to settlements by affiliates of the Jewish Federations of North America. These included information regarding donations from donor-advised funds in the SF federation that had been directed to the Central Fund of Israel (which often serves as the conduit for donations to settlements in the West Bank) and Friends of Ir David, an archaeological site just outside Jerusalem’s Old City. Ir David (known in Hebrew as Elad) has been criticized for its active support of Jewish settlement in East Jerusalem’s Arab neighborhood of Silwan and allegedly politicizing archaeological finds.

Responding to the Haaretz report at the time, Grossman told J Weekly that the Central Fund of Israel has since been removed from the list of acceptable groups for federation donations. Two other groups that received funds through the SF Jewish Community Federation in 2015 – the Hebron Fund and Honenu – were also removed because they violated federation guidelines, he said, without being specific about whose and which guidelines. Friends of Ir David, he said, remained acceptable.

Following last week’s Forward revelation regarding the Canary Mission donation, the San Francisco federation issued a statement saying that “a one time grant” supporting Canary Mission was made in 2016 and that it would no longer support the group.

The existing San Francisco federation guidelines were created following an incident that rocked the local Jewish community in 2009: The San Francisco Jewish Film Festival’s screening of the documentary “Rachel,” about the American activist Rachel Corrie, killed in the Gaza Strip in 2003 while trying to prevent the demolition of a Palestinian’s home.

The fact that the federation-supported festival chose to partner with Jewish Voice for Peace and American Friends Service Committee as co-presenters of the film, and that Corrie’s mother – BDS advocate Cindy Corrie – was invited to speak after the screening sparked a firestorm. The opening night gala was boycotted by some community members, the Israeli consul general called it a “big mistake,” and angry protesters slammed the federation for lending its support to the screening.

Following the furor, and with the hope of preventing similar incidents in the future, in early 2010 the SF Jewish Community Federation took the step of creating “mandatory guidelines” for all agencies and organizations receiving federation allocations, requiring them to demonstrate “consistency with JCF’s core values.”

The guidelines, created after a months-long, painstaking process involving multiple committees, declared that federation agencies could not support groups that “actively seek to proselytize Jews away from Judaism; or advocate for, or endorse, undermining the legitimacy of Israel … including through participation in the boycott, divestment and sanctions movement,” as well as the clause that forbade supporting bigotry and extremism.

If a violation was determined to have occurred, then the Jewish Community Federation would “take appropriate steps,” including possibly suspending funds or sponsorship.

The vehicle of federation “supporting foundations” and “donor-advised funds” were developed to allow wealthy family foundations to keep their funds under the federation umbrella while still retaining a say in where their contributions go.

The Diller Foundation is an example of how such an arrangement substantially boosts federations’ financial muscle. In 2014, Jewish federations and affiliated foundations held over $17.5 billion in donor-advised funds, according to EJewishPhilanthropy.com. It wrote that this has “helped Jewish philanthropy morph into a more entrepreneurial and less centrally controlled enterprise.”

Such arrangements, however, weaken the ability of federations reticent to set red lines about where funds bearing their name are permitted to flow. In the recent example of the Diller Foundation, donations that appear aimed at zealously combating anti-Semitism and delegitimization of Israel end up supporting groups that fall outside the federation’s own guidelines.

In the case of the Canary Mission contribution, indulging donor preferences seems to come at a price to the wider Jewish community.

“We students see the damage that Canary Mission is doing on our campuses,” said Borgwardt. “And we know that this is not where our community should be placing its energy.

“I think the organized Jewish community has to make a choice as to whether it cares more about these donors or about Jewish values,” she added. “And it will have to decide whether or not it is going to listen to the young Jews who want to rise to meet those values. We’ve been trying to express this to them for years now.”