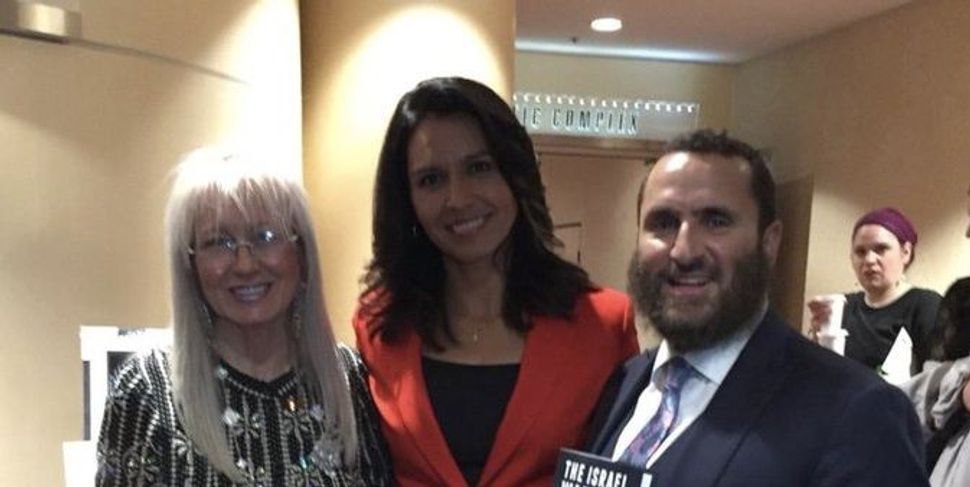 Tulsi Gabbard, the Democratic congresswoman from Hawaii who announced her bid for the Democratic presidential nomination in 2020 over the weekend, promised that her campaign will focus on “the issue of war and peace.” This statement alone sets her apart from all of the other candidates who have already announced their intentions for the next presidential race: She is the first, and possibly only, candidate who plans to make foreign and defense policy a central part of her platform.

This is especially true when it comes to the Middle East. Gabbard’s views and actions on this war-torn area can be described as unique and controversial. She has opposed recent U.S. military interventions in the Middle East, often citing her own experience of serving in Iraq to explain why she is so suspicious of American attempts to spread democracy or take down autocrats in the region. This has made her a favorite among many U.S. progressives, who are angry about the “forever wars” in Afghanistan and Iraq.

At the same time, during her six years in Congress Gabbard has developed some surprising relationships with right-wing supporters of Israel who are affiliated with the Republican Party. Her contacts with such groups took place mostly during President Barack Obama’s time in the White House.

In 2015, she spoke at a conference of Christians United for Israel – an organization that strongly opposes Palestinian statehood and supports Israeli settlements in the occupied West Bank. The organization had a leading role in fighting Obama’s policies in the Middle East. CUFI’s leader, Pastor John Hagee, for example, is an outspoken supporter of U.S. President Donald Trump; Hagee was invited by the Trump administration to speak at last year’s ceremony marking the transfer of the US. Embassy in Israel from Tel Aviv to Jerusalem.

In 2016, Gabbard received an award from Rabbi Shmuley Boteach, a New Jersey-based rabbi with close ties to casino billionaire Sheldon Adelson (the largest donor to the Republican Party). A year before Gabbard attended Boteach’s gala dinner and received his “Champion of Freedom” Award, Boteach published full-page ads in leading U.S. newspapers in which he accused Obama’s national security adviser, Susan Rice, of being responsible for the 1994 genocide in Rwanda. (Leading Jewish groups denounced the ads, and Boteach later apologized.)

A picture from the 2016 gala dinner, which Boteach uploaded to his Twitter account, shows him and Gabbard together with Miriam Adelson, the Israeli-born wife of Sheldon Adelson and a partner to his political donations to many GOP politicians.

Unlike many progressive Democrats, Gabbard didn’t skip Prime Minister Benjamin Netanyahu’s speech before the U.S. Congress in March 2015, in the midst of that year’s Israeli election. Sen. Bernie Sanders, whom Gabbard later strongly endorsed in the Democratic primary, didn’t attend the speech, accusing Netanyahu and Republicans in Congress of a “very bad” political stunt.

A year later, Gabbard’s primary challenger in Hawaii’s 2nd Congressional District, Shay Chan Hodges, attacked Gabbard for supporting a bill against online gambling that Adelson and other casino operators were promoting. In an article headlined “Who Does Tulsi Gabbard Represent?” Hodges asked: “Why is Tulsi Gabbard so friendly with a Republican billionaire?” and mentioned both Boteach’s 2016 award and the online gambling legislation.

Yet when Gabbard’s positions on the Israeli-Palestinian issue are examined, it is clear that, at least over the past two years, she has expressed views that are far from those of Adelson and the CUFI. In January 2017, she published a statement in support of a two-state solution to the conflict (Adelson has described Palestinians as a made-up nation). In May 2018, she criticized Israel for its reaction to protests and riots on the Gaza border and, during the same month, also condemned Trump’s withdrawal from the Iran nuclear deal (which she voted in favor of in 2015).

The most unique – and controversial – step Gabbard has taken when it comes to the Middle East was her January 2017 trip to Syria, during which she met with President Bashar Assad, who has emerged victorious from the country’s devastating civil war. Gabbard didn’t inform her party’s congressional leadership about the meeting with Assad, which she claimed was part of an attempt to “bring peace” to Syria. She was harshly criticized by politicians from both parties for taking the meeting.

Even before her trip to Syria, Gabbard expressed non-mainstream views on Syria. In November 2015, she introduced a bipartisan bill to “end the illegal war” against Syria. “The U.S. is waging two wars in Syria. The first is the war against ISIS and other Islamic extremists, which Congress authorized after the terrorist attacks on 9/11,” she stated. The second war, she said, “is the illegal war to overthrow the Syrian government of Assad.

“The war to overthrow Assad is counter-productive because it actually helps ISIS and other Islamic extremists achieve their goal of overthrowing the Syrian government of Assad and taking control of all of Syria – which will simply increase human suffering in the region, exacerbate the refugee crisis, and pose a greater threat to the world,” she continued. “Also, the war to overthrow Assad is illegal because Congress never authorized it.”

In 2016, Gabbard said, “There is no doubt that Assad is a brutal dictator, but common sense tells us that if we want to defeat ISIS and other Islamist extremist groups, we need to immediately end the illegal and counterproductive war to overthrow the Syrian government of Assad.”

This position is somewhat similar to that of Trump, who has made similar comments over the past few years. Trump has denounced Assad as an “animal” and twice used military force to punish him for allegedly using chemical weapons against civilians. But at the same time, he has insisted that the top priority for the United States. is defeating ISIS, and that Assad can remain in power.

Gabbard was an early and avowed supporter of Sanders during the 2016 Democratic primaries that he eventually lost to Hillary Clinton. She is hoping to attract the support of progressive Democrats during next year’s party primaries, and to distinguish herself from other candidates by highlighting her independent foreign policy views.

If her nomination gains steam and becomes a viable threat to more well-known candidates, the risk for Gabbard is that the very same issues she wants to highlight – her foreign policy views – will be used against her by her opponents.