Your guide to the World Zionist Congress elections, the most important vote you’ve never heard of 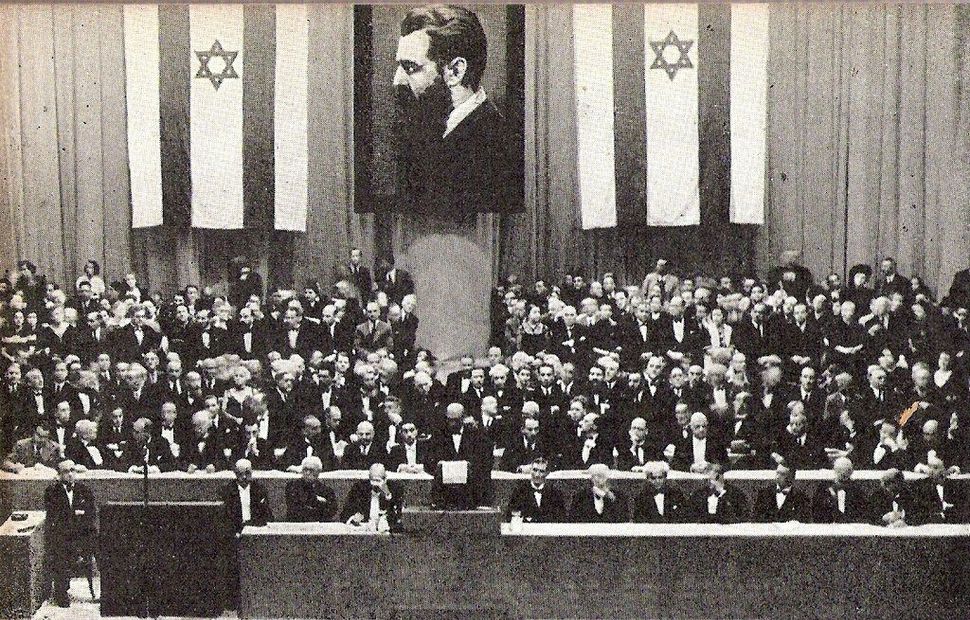 Most Jews have never heard of the World Zionist Congress, and those that have probably learned about it in history class. It was founded over a century ago by Theodor Herzl.

But the Congress still exists, and it’s actually really important. That’s because when it meets every five years, elected delegates makes major decisions about two things: how to spend nearly $5 billion that goes to Jewish organizations and programs in Israel and around the world, and who should serve as board members for other influential, affluent organizations, like the Jewish Agency for Israel, the Jewish National Fund and the World Zionist Organization.

And if you are reading this, there’s a good chance you can have a say in all this — by voting in the World Zionist Congress elections, which are just about to start. The elections are how American Jews will decide who will serve in the Congress.

Here’s what you need to know about them:

Are the elections especially important this year?

Yes, because more people are running, and more people are voting. For example: The Reform movement used the last election to get more of a say over whether to buy land in the West Bank, and they’re still working on that issue. (Read more below.) Organizers are expecting turnout to grow this year. 15 parties are running, three more than last year.

“There are more slates running across the board; there are more candidates running. Overall there’s more interest, which hopefully will lead to more engagement,” Herbert Block, the executive director of the American Zionist Movement, which runs the elections, told JTA.

YOU, probably. Voting is open to any adult Jew who is a United States citizen or permanent resident, pays the $7.50 ballot fee ($5 if you’re 18-25) and signs a statement affirming that they are someone who “views a Jewish, Zionist, democratic and secure State of Israel to be the expression of the common responsibility of the Jewish people for its continuity and future.” And yes, registering is basically on the honor system – you don’t have to prove any of this.

How does voting work?

There will be 500 delegates making those decisions about the fate of $5 billion at the World Zionist Congress, which happens in October in Jerusalem. Voting in the United States will take place online between January 21 and March 11.

Israel, the United States and the rest of the Jewish Diaspora will each be sending about a third of the delegates. That means you get to vote for 152 of them — the Americans. Those 152 delegates are decided through a system that works like elections in Israel. In each election, there are parties that make a list or “slate” of candidates. The overall vote determines how many people from that list get into power. If a party gets 10% of the vote, then it gets to pick 10% of the American delegation. Whichever party gets the most votes will have the most say over what happens at that October meeting of the World Zionist Congress — and its money, and its power — when it convenes in Jerusalem in October.

(Israel’s delegates will be determined by the results of its parliamentary elections in March – a party that gets 10% of the Knesset seats will also get 10% of Israel’s Congress delegates.)

What happened in the last election?

In that election, the slate of the Reform movement got 56 of 145 spots, the Conservative movement got 25 and the main Orthodox delegation 24, with the remainder split among smaller parties. That’s roughly in line with American Jewish demographics, though the Orthodox parties overperformed.

The Reform slate’s strong showing in 2015 allowed it to name board members to the Jewish National Fund. The organization is best known for planting trees in Israel, but it’s also bought properties in eastern Jerusalem and built settlements in the West Bank, which many liberal Jews think makes the prospect of peace with Palestinians more difficult. The Reform movement claimed last year that even though they had set policies against buying more West Bank land, JNF subsidiaries had done so anyway and then hidden their actions from Reform representatives. So the Reform movement is hoping for an even stronger showing, in order to prevent such things from happening again.

These elections are usually overlooked – so why is interest surging now?

It has a lot to do with the last election, and the Reform movement’s strong showing. Both the Reform movement and the major non-religious liberal Jewish groups are putting together major publicity pushes to juice voter turnout – they say that this is one of the only ways that American Jews can truly influence Israeli politics. The liberals want money to go toward progressive Israeli groups and away from West Bank settlements. And many right-wing and Orthodox groups are pushing back in response, wanting to ensure that priorities instead go to protecting their causes, like yeshivas or settlement expansion.

Americans4Israel: Comprised of the youth group Young Judaea and a collection of smaller, center-right and right-wing organizations, American4Israel stresses their independence from larger movements, and wants to reform how the WZO itself is run.

Dorshei Torah V’Tzion: This slate is affiliated with groups like the Jewish Orthodox Feminist Alliance, Yeshivat Chovevei Torah and others on the most liberal end of the Orthodox Jewish spectrum – sometimes called “Open Orthodox,” though not everyone uses that term. Dorshei Torah V’Tzion is pushing for improved Israel-Diaspora relations, religious pluralism and more support for women’s equality, especially in religious spaces like yeshivot. Their list of candidates is a who’s who of the liberal Orthodox world, including Rabbi Avi Weiss, the first modern-day Orthodox rabbi to ordain women, and Rabba Sara Hurwitz, his first female graduate.

Eretz Hakodesh: A new slate led by Pesach Lerner, the head of the Coalition for Jewish Values, a group of hundreds of right-wing Orthodox rabbis. Eretz Hakodesh (Hebrew for “The Holy Land”) calls for promoting “classical Jewish values of Torah” in Israel. “The Torah community must vote, to prevent values of the liberal movements from infiltrating the Torah atmosphere of Eretz Yisrael,” the group says on its website.

Hatikvah: Supported by dovish groups like J Street and the New Israel Fund, Hatikvah’s first-time candidates include some of the Zionist left’s biggest figures, like Rabbi Sharon Brous of IKAR in Los Angeles, National Council of Jewish Women CEO Sheila Katz and commentator Peter Beinart. Hatikvah is pledging to move funding away from West Bank settlements and toward peace and coexistence efforts. (Full disclosure: Samuel Norich, the Forward’s president, and Kenneth Bob, who is on the Forward’s board of directors, are Hatikvah candidates.)

Herut Zionists: Carrying on the legacy of Ze’ev Jabotinsky, the ideological father of the Israeli right, Herut calls for “a return to the traditional values of Zionism,” including funding for West Bank settlements.

Kol Yisrael: Kol Yisrael is backed by the Israel advocacy group StandWithUs and the Israeli American Council. These groups are known for their staunch opposition to the boycott-Israel movement known as BDS, but Kol Yisrael’s platform surprisingly avoids mentioning that and other controversial subjects, instead promising to improve Israel-Diaspora relationships through more funding for summer camps, exchange programs and teen educational initiatives. (Full disclosure: My aunt, Mina Rush, is a Kol Yisrael candidate.)

MERCAZ USA: The Zionist organization of Conservative Judaism, MERCAZ pushes for recognition of and funding for its movement’s programs in Israel, implementing the egalitarian prayer plan at the Western Wall, and a peace agreement with the Palestinians.

Orthodox Israel Coalition – Mizrahi: Backed by the giants of mainstream Orthodoxy like the Orthodox Union and Yeshiva University, the OIC wants to strengthen Orthodox yeshivas in Israel and the Diaspora, fight BDS and encourage West Bank settlement.

Vision: This mostly-Millennial slate is focused on fighting for Israel on campus and promoting “fresh solutions to Israel’s conflict with the Palestinians” – as in, not the two-state solution. As the Forward reported in 2015, it’s affiliated with Tkuma, a small far-right religious Zionist political party. Vision’s leader is Rudy Rochman, an IDF veteran who became a controversial pro-Israel activist while studying at Columbia University.

Vote Reform: The largest vote-getter five years ago, Vote Reform represents America’s largest Jewish denomination, as well as the smaller Reconstructionist movement. The slate will oppose racism and discrimination and push for a two-state solution, in addition to recognition of non-Orthodox Judaism in Israel.

ZOA Coalition: Endorsed by many of the top figures in Israel’s ruling Likud party, the Zionist Organization of America’s slate promises to push the organization’s goals: strengthened settlements and opposition to BDS and the creation of what it calls a “Iranian-proxy Palestinian-Arab terror state.”

Corrections: A previous version of this article stated that Herbert Block is the president of the American Zionist Movement. In fact, he is the organization’s executive director. Additionally, this article also stated MERCAZ supports a two-state solution. In fact, it calls for a peace settlement with the Palestinians but does not specify that it should be a two-state solution. The article described Vision’s slate of candidates as “all-Millennial,” when in fact, it is only mostly-Millennial. It said that Vote Reform was endorsed by “what used to be called Reconstructionist Judaism”; in fact, the movement is still called Reconstructionism, though its main organizations merged in 2018 and formed a new group called Reconstructing Judaism. And it described ZOA, which adamantly opposes the two-state solution under present Palestinian leadership, as supporting a one-state solution; the group says it does not.

Your guide to the World Zionist Congress elections, the most important vote you’ve never heard of