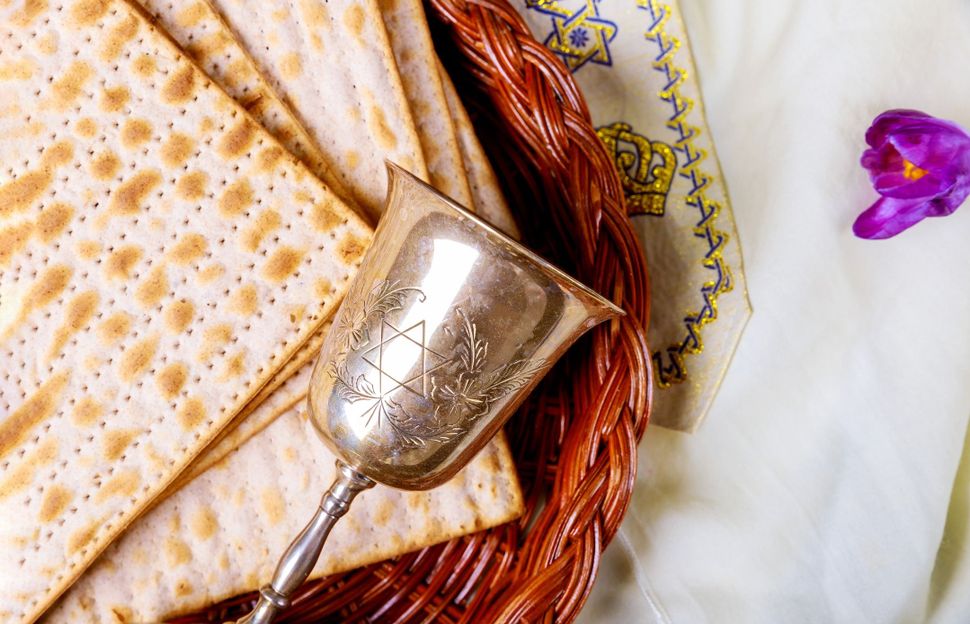 Passover Seder objects, including matzah and a kiddush cup. Image by photovs/iStock

Dana Naomy Mills is an Israeli academic living in Oxford, Great Britain. She makes a point to fly home every year for Passover.

“Oxford has a tiny Jewish community, and so it’s hard to get matzot, and basic things to make you feel at home,” she said. “I’m a matzah brei addict,” she added, referring to the mixture of matzah and eggs that’s a common breakfast during the holiday, when it’s forbidden to eat bread. “I’m 38, and when I go home, my mother makes matzah brei every morning.”

Mills doesn’t have enough vacation time to spend two weeks in an Israeli quarantine before being let out for the Seder, so she’s going to have to stay in Britain this year.

She joins thousands of Americans and Europeans who were planning on traveling to Israel over the coming months, and are now being forced to make alternate arrangements, unsure when they’ll be able to visit again.

“It’s hard being away,” Mills said. “And the fact that there’s so much uncertainty – it’s not clear if it’s a dangerous epidemic, or just preventative measures.”

Ayana Haviv, a singer in Los Angeles, had to cancel her daughter’s Bat Mitzvah in Israel, which was scheduled for next month. “Family was coming from all over the world,” she tweeted. “Very sad but nothing to do about it. Hopefully the airlines will give us a refund or credit & we will try again next spring.”

Some people were trying to look on the bright side of things. Karolyn Hart, the president of a technology company, said she had planned a two-week “bucket list” tour of Israel’s holy sites. After the travel company cancelled her trip, she said she was “mostly feeling relieved” and planned to rebook for later in the year.

“Fortunately we have a lot of flexibility in moving around our schedules,” she wrote via direct message. “However, I feel bad for those who don’t have that level of freedom in their jobs.” She added that she received a full refund.

The quarantine is likely to send shockwaves throughout the Israeli economy. The Bank of Israel, the country’s central financial institution, disclosed Sunday that they are expecting the tourism and aviation industries to essentially shut down over the next few months.

Indeed, several organizations have cancelled or postponed their Israel trips, from Birthright Israel programs to a Yale University Israeli-Palestinian dialogue group to a Jewish federation in Michigan, according to reports and would-be participants who contacted the Forward.

And the Passover travel industry – offering resort packages with kosher-for-Passover food – is seeing a wave of cancellations for programs both in Israel and around the world, JTA reported last week.

Such cancellations have an effect not only on the economy, but also on the enjoyment of the holiday itself.

“I really miss home,” Mills said. “England is cold and miserable, so it would be nice to see everyone.”

Correction: A previous version of this article claimed that Karolyn Hart is the president of a Canadian technology company. In fact, the company is American, though it has an office in Canada.