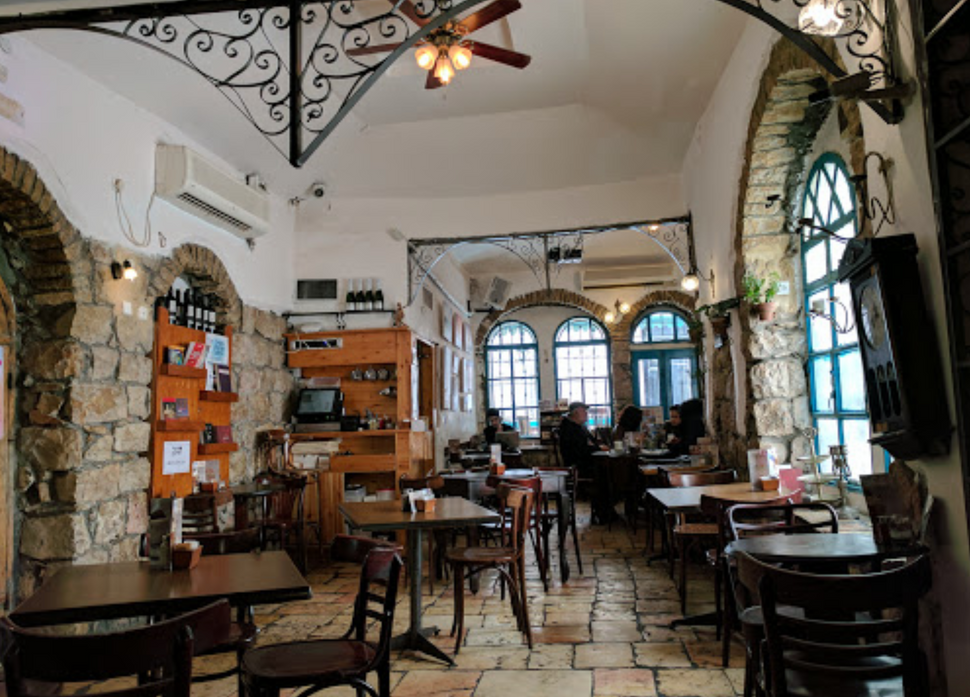 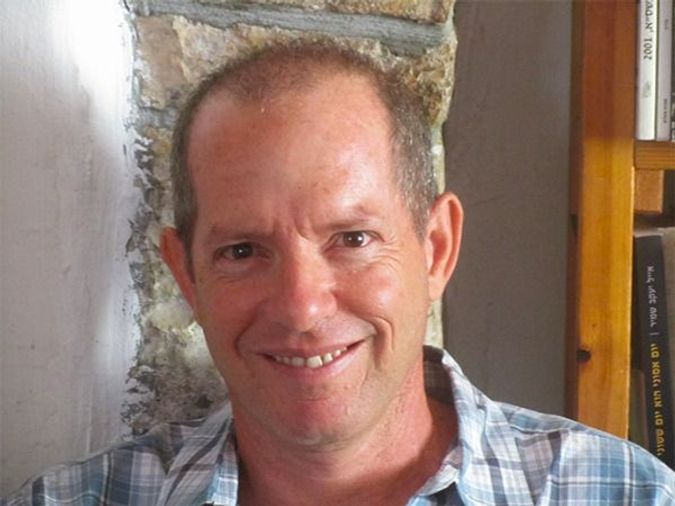 The bookstore café that David Ehrlich opened as a dream 26 years ago, a place that became a Jerusalem institution for people who appreciated words, was called Tmol Shilshom. It’s Hebrew for “Only Yesterday”, taken from the title of the great Hebrew writer Shai Agnon’s masterpiece.

Ehrlich loved the novel, friends say, but also the name’s air of romantic nostalgia for old-world cafes he hoped his might evoke.

Ehrlich died Sunday in his sleep, apparently of a heart attack. He was 61 and just a week ago he and his business partner Dan Goldberg had closed the café as Jerusalem, and the rest of Israel, shut down in wake of the coronavirus pandemic. Only a small group of mourners were permitted to gather for his funeral on Monday.

But Ehrlich’s reach was vast, and friends and admirers in Israel and across the world found themselves disoriented by his sudden death, which is not believed to be connected to the virus. He was a man known for bringing a diverse set of writers and lovers of literature and café life together at Tmol Shilshom.

The cafe can be found in downtown Jerusalem, down an alley and through a stone courtyard. Inside its book-lined walls, the lunch and dinner crowds and writers with laptops would settle at wooden tables and plush antique chairs. Since its opening, Tmol Shilshom has hosted numerous book launches and literary events.

Ehrlich, a journalist turned fiction writer, was a man at home in the world, with a seemingly insatiable appetite for people and their stories, whether a new customer or one of Israel’s internationally renowned writers or poets. He was gay, and in politically and religiously conservative Jerusalem, the café was a rare place of intersection for LGBTQ and Orthodox patrons.

He is survived by Tamar Baum, his friend and the mother of their 12-year-old twins; his parents and a sister.

Here is a collection of tributes from some of Ehrlich’s admirers, many of them fellow writers – all of them heartbroken.

David loved to tell this story: In the days when Yehuda Amichai was dying, he came for one last visit to Tmol Shilshom. Amichai was the sort of patron saint of Tmol, having read his poems at Tmol’s opening night, and many times subsequently. The stuffed armchair in which he always sat came to be called, and remains, kisei Amichai, Amichai’s chair.

So on this occasion, Amichai makes the effort to come into the cafe, and finds that his chair is occupied by a tourist, who possibly has no idea who Amichai is and possibly does not even speak Hebrew. So he hovers uncomfortably nearby. The tourist perceives what is happening, and graciously offers the chair to Amichai, who enjoys it for one final time.

David was running a mission-driven business before we used that term. His mission was to bring together Yehuda Amichai and foreign tourists, Orthodox, LGBTQ, young and old, all of us. His professional mission, manifest as Tmol Shilshom, embodied what he loved most in his life: literature, friendships, Jerusalem, and love.

‘How good it was to have you in our world’

If you had a book published, there was no doubt: it had to be launched at Tmol Shilshom, where one could feel part of a legacy of a respected writers and poets, a place where you could be part of the fabric of Jerusalem’s creative writing culture. The stage was very modest, a microphone, a bar stool that tended to sway on the uneven old stone floor.

Tmol Shilshom is a place where the Pride (LGBT) community and even the strictest of the modern Orthodox could exist together without stress. It is a seemingly impossible combination in Jerusalem, one that only David had the recipe for.

And now in the midst of these crazy times when we are trapped in our homes, his heart suddenly stopped and his journey came to an end. David, you left us. How good it was to have you in our world, how much you infused it with your spirit. You were a jewel in the crown of Jerusalem whose place cannot be filled.

Tsila Hayoun, novelist and director of culture and education at The National Library of Israel

Of all the million and one stories I want to tell you to try and sum up David and what he meant and continues to mean to me, the one that maybe does it best, goes back to the beginning, when the café was half the size, just a few tables, and when a young man trying to get a business off the ground didn’t need an unwashed, unpublished writer sitting there all day long, every day, over a single espresso shot. But David really did want that café to embody something, for it to be a home for writers and writing, not only for bound books and literary lights.

He watched me sitting and watched me working, and when he sat down one day to talk about all the time I spent, I figured it could and rightly would be to toss me out. But what he wanted me to know was that he was rooting for me, that he wanted me to make it, and that he knew I couldn’t really afford to eat there then, couldn’t really afford my coffees back then, and so he said, here’s the deal, you can either have half off everything, a permanent 50% discount, and pay when the check comes, or you can keep a tab that I’ll keep in my desk, and you pay me whenever you can down the line.

I chose the latter—I didn’t want the break, I just needed some time, and a place to spend it, and a good friend who believed in me without any reason to. That’s who David was, a true believer in a city full of faith.

‘A kind of shul and shrine for the writer’s soul’

I first got to know David around 2004, when I was working on a story about how Jerusalem cafes were surviving in the middle of the Second Intifada. As I look back on the story now, he talked about staying open as an act of resilience – a lesson we could all use some help with now — but what especially stands out is that he said: “I, as a Jerusalemite, wouldn’t want to live in a city that doesn’t have cultural establishments worth living for.”

What David Ehrlich created was a kind of shul and shrine for the writer’s soul, in a place worth living for.

One of the things that impressed me most about David in recent years was his great joy at having become a father. When he was younger, he once told me, he thought that being a gay man meant he wouldn’t get to have children. He was so glad to be living in this era in which the world had changed, allowing more opportunities for people in the LGBTQ community to become parents.

‘Irrationational optimism and a deep fundamental belief in humanity’

I’ve known David for many years, his passion for literature and for people had existed in almost any sentence I’ve heard him say, together with some irrational optimism and a deep fundamental belief in humanity.

Etgar Keret, author of “Fly Already” (and others)

‘It was our home away from home’

Tmol Shilshom was so much more than a mere café or a bookstore – it was our home away from home, our hub, our cultural center.

Cozy and elegant, Tmol Shilshom was decorated in old Jerusalem style – oozing with charm and warmth. The various tables were associated in our minds with the great Hebrew authors – Amos Oz, Yehuda Amichai, David Grossman and many others – who, according to the local myth, favored them and made them their regular tables.

Everything about David was warm and intimate: his gentle and generous demeanor, his delicate sense of humor, his love of books and above all, of people.

When it was time for me to launch my books, David Erlich’s Tmol Shilshom was my immediate choice of venue, in spite of the fact that there were larger, better configured and most certainly quieter locations in Jerusalem. After all, there is no place like home – and David Erlich created a true home for us, writers, readers, and lovers of Hebrew literature.

‘The little book of couples whose relationships started at Tmol Shilshom’

At base, David was a people person. I think he’d appreciate that phrase; more than a businessman, a writer, a community leader, he cared about humanity — and was interested, even perhaps fascinated, by individual people. His writings reflect that; his love of the love affairs associated with Tmol Shilshom reflected that; and I think that’s what connected us — as ‘connectors,’ of a sort — more than the events we held together.

For more than 15 years, I’ve parked myself at Tmol Shilshom on my birthday — sitting for the whole day, spending quality time with friends and family, sort of “holding court,” as David once described it. He was tickled by the concept, and every year made a point to come sit for a while and catch up. My birthday is in the winter, and David so enjoyed my ritual that some years he’d call me up after Succot to ask me “”Nu, when are we scheduling your birthday?””

As a writer and supporter of writers — especially Jerusalem writers — David insisted that I come sit at Tmol to work on my book, not to mention plying me with occasional coffees and cakes on the house. It was natural that we held the Jerusalem book launch of My Israel Trail at Tmol Shilshom, and that he introduced the evening.

And it was also natural that my (now) wife Miriam and I had our first date there; David told me he was going to add our love story to the little book of couples whose relationships started at Tmol Shilshom.