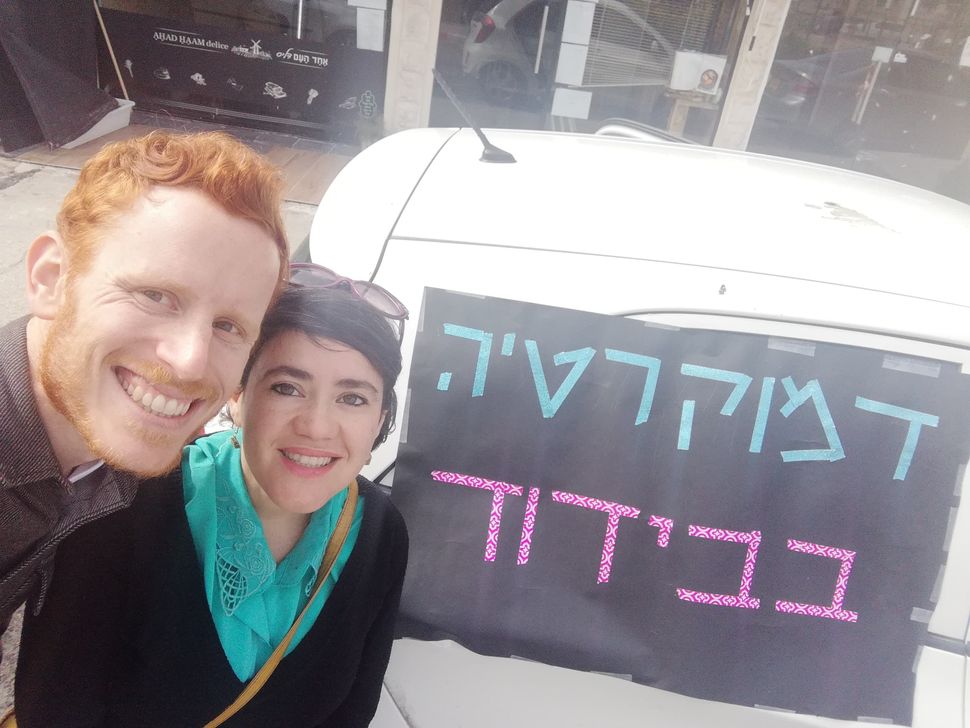 Noa Aviv and her husband prepare for a car protest. Image by Naomi Zeveloff

Israelis sheltering at home this week against the coronavirus were jostled by several minutes of loud clanging coming from balconies in Haifa, Tel Aviv, and Jerusalem. Demonstrators were crashing pots and pans.

In typical times, pro-democracy activists would have stormed Tel Aviv’s Rabin Square. But with Israel’s strict restrictions on gathering in the time of coronavirus, dismayed Israelis had to come up with an alternative.

They were protesting an alarming set of political developments which saw parliament temporarily incapacitated in the middle of an unprecedented health crisis. Now the legislative body is working again, and being led by Prime Minister Benjamin Netanyahu’s main rival, Benny Gantz. Gantz seems poised to enter into a unity deal with Netanyahu, breaking his promise not to join the prime minister because of his corruption charges — all fodder for more protest, tweaked for the age of coronavirus.

Organizers with Anu, a social activism platform, were inspired by videos of Italians singing from their windows during lockdown. They wanted to do something similarly unifying, but noisier. Anu advertised the “balcony protest” on Facebook, and thousands RSVPed.

One of the organizers, Sefi Krupsky, listened from the street outside his apartment in central Tel Aviv. He said he was “exhilarated” by the cacophony. “It was loud.”

The pots and pans protest was just one of several unusual kinds of demonstrations that sprung up in the midst of Israel’s recent political crisis after three inconclusive elections in less than a year.

Tamar Hermann, a senior fellow at the Israel Democracy Institute, said this and other alternative protests show that “freedom of speech has not been impaired” in Israel, even as the political crisis and the health crisis intersect and Netanyahu’s caretaker government has authorized controversial emergency measures like surveilling citizens to halt the virus.

The Knesset freeze prompted Darkenu, a civil society group, to plan an online demonstration last Saturday for Israelis stuck at home under coronavirus regulations. “The Israeli government thought that maybe Israelis under the corona crisis won’t speak up,” said Yaya Fink, the group’s CEO. “We as ‘Startup Nation’ wanted to think how we could fight for our values.”

The group rented a Tel Aviv studio for a classic Israeli demonstration, with somber speakers and schmaltzy music. It published a link online, and invited people to participate via Facebook, Zoom, and other platforms. TV presenter Lucy Aharish, wearing medical gloves and standing at a podium, opened the protest by saying it was the first of its kind in Israel. Behind her on stage, a screen displayed images of people participating from home.

“This is the time to understand that we live in a democracy,” she said. “Demos kratos, the rule of the people.”

Indeed, Hermann predicted that protesters who follow social distancing rules will find greater support for their cause than those who don’t. One car protest outside the Knesset was stopped by the police, and protesters came out and clashed with the officers. Such episodes could prove counterproductive, said Hermann.

“One of the things people should think of is how to express their dissatisfaction in a way that will not make them outcasts,” she said.

Noa Aviv watched the Darkenu event from her couch in Jerusalem. A 33-year-old choir director, she has been going to protests her entire life, from the 2011 social justice demonstrations to the movement against Palestinian house evictions in East Jerusalem. This was her first online. “It was very, very strange, just to sit at home and watch the protest,” she said.

Aviv said that she missed being part of a crowd. Online, she could see the number of people viewing — organizers said about 500,000 tuned in in real time — but it wasn’t the same as being on the street together. The crowd didn’t boo or cheer, but responded with likes, emojis, and comments.

A few days later, Aviv signed on for another atypical demonstration and this time she had the opportunity to get off her couch. The Movement for Quality Government in Israel called a car protest; Israelis drove to the parliament building waving black flags to demonstrate against the freeze in operations. Aviv hung a “democracy in quarantine” sign on her car, but left her pink bullhorn on the carseat; the honking was too loud to hear anything else.

“I can’t stay at home when I see all these bad things happening,” she said. “I am very happy we did find a way to say what we believe in.”

Yoni Weil, a 71-year-old retired social worker who lives in the Galilee, engaged in yet another kind of protest against the Knesset freeze. He attached a black T-shirt to a long stick with a rubber band and placed it on his fence. “It is symbolic to show that I am fed up with the way that Bibi Netanyahu and his ministers are hurting democratic life in Israel.”

Protesters and organizers say they look forward to the day that they can take to the streets again. But until then, the coronavirus lockdowns have provided them with a burst of creativity for new kinds of demonstrations.

“We are a country that has a lot of experience with protest,” said Krupsky, who planned the pots and pans protest. “Maybe the very difficult and very harsh situation will bring us new tools and new ideas to protest in the future, when things will settle down and we can get out of the house.”

Naomi Zeveloff is a freelancer journalist based in Tel Aviv-Jaffa.