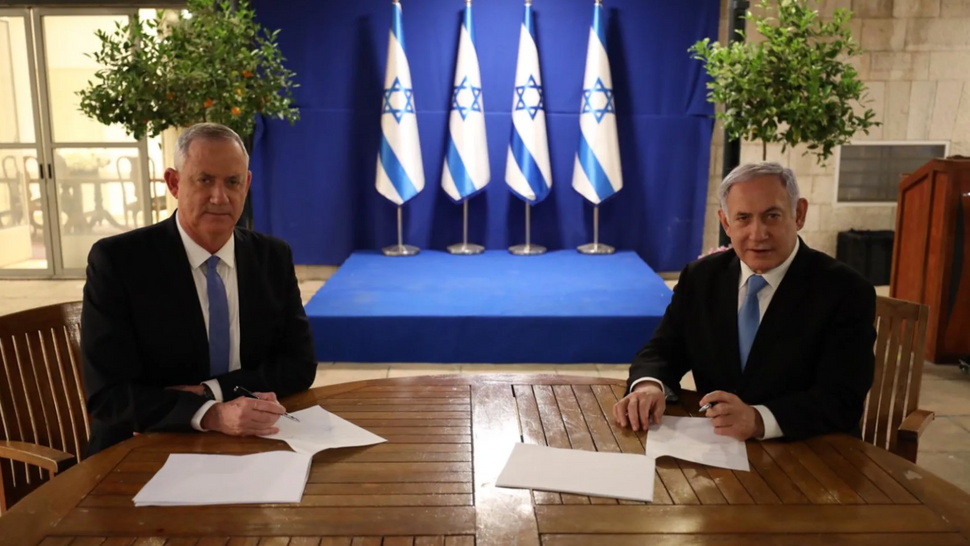 Let’s start with the good news, for a change. If the coalition agreement signed by Benjamin Netanyahu and Benny Gantz on Monday night, a few minutes before the onset of Holocaust Remembrance Day, is ever implemented, Israel’s new government could theoretically be a vast improvement over its immediate predecessors.

Replacing the xenophobic, nationalist, Netanyahu-dominated ultra-right government that has ruled Israel for the past five years with a saner, power-sharing rational right or center-right coalition is nothing to be sneezed at. And, supposedly, it’s the bottom line that counts.

On the face of it, at least, the envisaged change is dramatic. Netanyahu will no longer be flying solo. His every move, appointment, decision and policy will henceforth require the consent of his new co-pilot Gantz and his Kahol Lavan party. The cabinet and all other government forums will operate on the basis of strict parity, which could, of course, spell endless paralysis.

The Netanyahu-inspired constitutional revolution and usurpation of democracy that Israeli moderates feared will be shelved for the time being. The disproportionate influence hitherto exerted by the ultra-Orthodox parties and the settler lobby will be diminished. The new center of power, according to the coalition agreement, will reside with Gantz and Netanyahu alone: Their wishes, if they ever agree on anything, will be the new government’s command.

Important portfolios, including Defense, Foreign Affairs and Justice, will reside with Kahol Lavan for the duration of the existence of the new government, which is tentatively fixed at three years but may be extended by mutual consent. Foreign officials, especially European, who maintain regular contact with their Israeli counterparts, will undoubtedly be relieved to work once again with experienced center-right ministers rather than Netanyahu’s motley crew of zealots, hacks and has-beens.

If most of the world weren’t preoccupied with battling coronavirus, it would probably welcome the apparent shift in Israel’s general direction. Such hopes, nonetheless, might be misplaced, at least as far as the Israeli-Palestinian conflict is concerned. With Gantz in the Defense Ministry and Gabi Ashkenazi in the Foreign Ministry, the new government might be more trigger-happy than those headed by the ever-cautious Netanyahu.

The agreement stipulates, moreover, that Netanyahu will be able to propose annexation of whatever territories earmarked for Israel in Donald Trump’s Deal of the Century that the U.S. administration agrees to allow Israel to annex – and to do so well before the November 3 presidential elections.

For the Israeli left, or whatever is left of it, the Netanyahu-Gantz agreement is an abomination, however, and not because it could perpetuate the occupation. Relations with the Palestinians, after all, played only a minor role in the three Israeli elections held over the past year. The thrust of the battle between the political camps was a personal referendum on Netanyahu and his continued rule despite three criminal indictments: In this regard, Gantz’s concessions render him a virtual Benedict Arnold in the eyes of many of his former supporters and champions of the rule of law.

Under the agreement, Netanyahu will not only be able to serve as prime minister while concurrently standing trial for bribery, fraud and breach of trust – he could theoretically keep on being prime minister, in the government’s first 18 months, or “alternative prime minister” in its second year and a half, even if he’s convicted of his crimes, as long as his appeal process isn’t final. And if the High Court of Justice decides that Netanyahu is barred from continuing at his post, rather than accept the verdict, Gantz has agreed to call for new election.

Gantz and his colleagues, who repeatedly pledged to never be a part of a government headed by Netanyahu, have now granted him the public legitimacy he has so sorely lacked. Netanyahu may not be able to legislate his way out of his legal predicament as he may have hoped, but his continued rule has now been stamped kosher by his fiercest rivals.

Netanyahu may not have had much choice. Whether or not he intended to reach an agreement with Gantz from the outset or turned agreeable only in the past few days, the alternative option of heading for a fourth straight election campaign was getting less attractive by the day. With a crippling economic recession on the horizon because of the coronavirus shutdown and hundreds of thousands of Likud voters left without jobs, along with other Israelis, Netanyahu’s prospects to sweep the election turned from probable to unlikely within a matter of days.

Gantz, on the other hand, has been savaged over the past few weeks not only for his about-face on joining Netanyahu but also for being outplayed and outmaneuvered in his negotiations with the prime minister. On the other hand, Gantz extracted a rigid power-sharing agreement with Netanyahu and took control of powerful government portfolios with only 17 lawmakers behind him, compared to 59 in Netanyahu’s right-wing bloc. The prime minister will now have some explaining to do in his own backyard.

Despite the signing, however, the agreement still has formidable obstacles awaiting it. The deal requires substantial legislation in the Knesset, including amendments of constitutional Basic Laws, which must be completed within less than three weeks, before the Knesset automatically disperses and heads for new election. Some of the proposed changes may be challenged before the High Court of Justice, and any intervention by the court could spell a perilous delay.

Finally, despite being billed as a national emergency government constituted in the face of the coronavirus crisis, it conjoins two political entities that distrust and in many cases continue to detest each other as before. Optimists may yearn for a new era of conciliation and mutual understanding, but the odds are that the parties will bring their grudges and hostilities to the cabinet forums and parliamentary committees they will now jointly command. Instead of national unity, Israel could wind up with a perpetual battle royale even fiercer than the traditional fight between coalition and opposition.