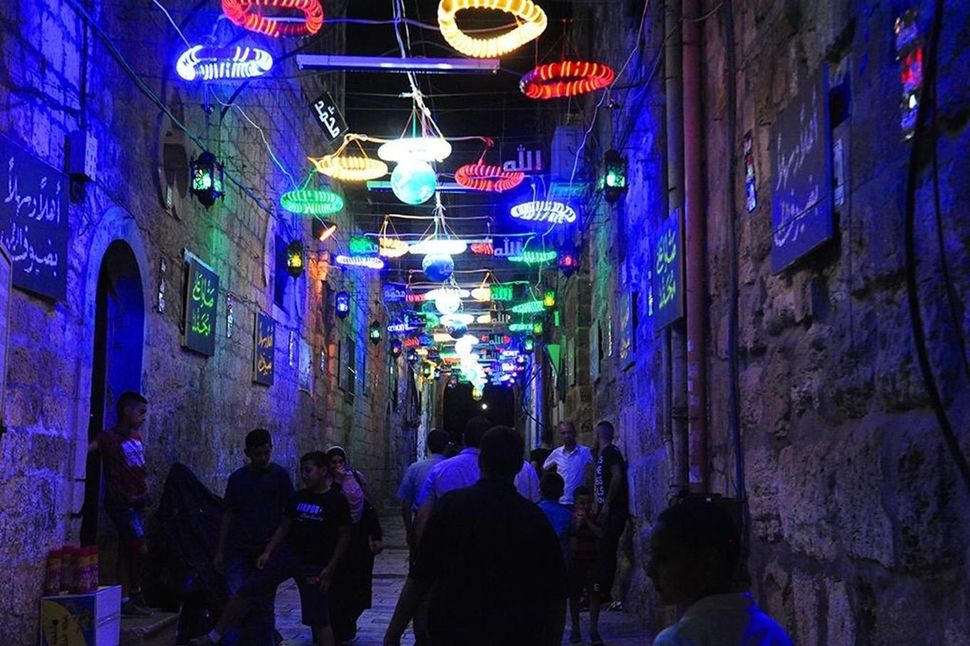 Ramadan in Jerusalem, 2016. Image by Photo by Dancho Arnon

Click on a new website called “Ramadan Nights from Jerusalem” and you’ll come upon brilliant crescent stars and ade-colored moons, the symbols of Islam, laid against a backdrop of a blue-and-green carved latticework. You’ll find daily virtual events about Islam and Arabic culture in Arabic, Hebrew and English.

What may be less obviously apparent is that the site is more than just a broad collaborative event spearheaded by Israel’s National Library. It’s a call for social change.

“What distinguishes this initiative is that it asks Jews to focus exclusively on another religion and culture,” explained Dr. Raquel Ukeles, curator of the National Library’s Islam and Middle East collection and the project’s co-director. “Rather than champion an interreligious approach, which has been the common way to embrace tolerance and pluralism in Israel, this initiative shines the light directly on Islam and Muslim culture.”

The ultimate goal of the initiative, said Ukeles, is to incorporate Ramadan and the Muslim calendar into the state’s calendar and the collective consciousness of all Israelis.

The holy month of Ramadan ends May 23. As of May 20, more than 18,000 people have used the platform, clicking on from Israel, Palestine, Jordan, the US and other countries.

Events spotlighted on the website have taken place in East and West Jerusalem and in Arab towns in northern Israel, offering various ways to mark the sacred fasting month. There are virtual tours and lectures from the Tower of David, the Israel Museum and the Museum for Islamic Art; virtual meet-ups and workshops from Jerusalem organizations; and activities from community centers in East Jerusalem and religious programs from Dar as-Saalam for introducing Islam. 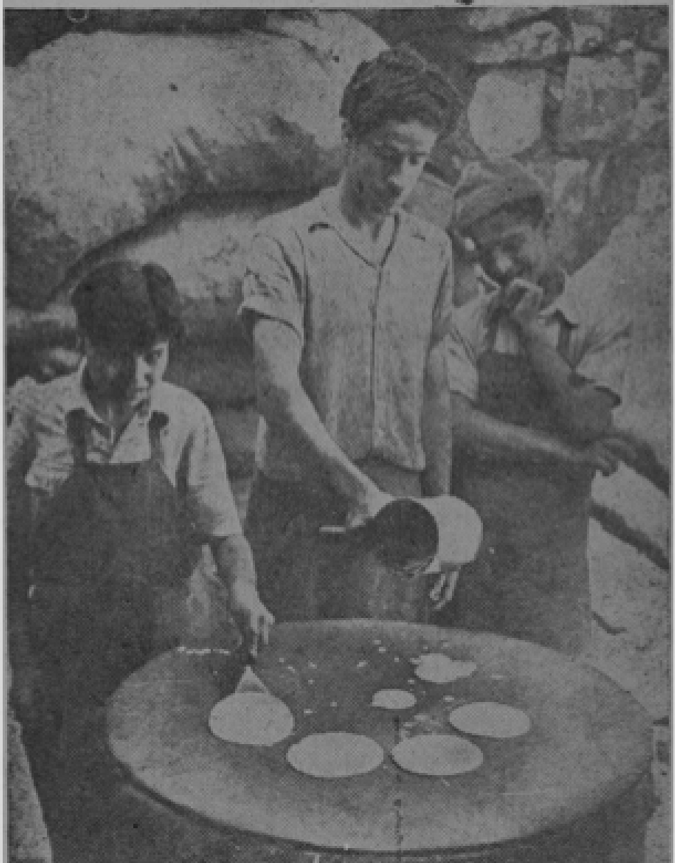 Some events are live-streamed, and others are on demand. The Arabic website is, quite naturally, the richest in content, with additional lectures, children’s activities, culinary workshops and even historically-rich contests based on the National Library’s mammoth digital archive of 200,000 pages of Ottoman and Mandate-Era Palestinian Arabic newspapers called Jrayed. Through this week there were 69 live events in Arabic, 15 in Hebrew and 2 in English. Adapted to the stay-at-home edict of the coronavirus pandemic, the website invites visitors to learn about Ramadan from the comfortable perch of their own sofas. Visitors can listen to the evening call to prayer, livestreamed from the Jazzar mosque in Acre. They can savor the sounds of an East Jerusalem musician thrumming spiritual Tarabi old-school music on his Ud, or hear leading scholars and activists from Morocco, Indonesia, and Turkey discuss different Ramadan traditions. Or, if they understand Arabic, they can learn how to cook Palestinian fare.

In Arabic, the website is called “Taraweeh Maqdisiyya,” to evoke the special Taraweeh night prayers that are said congregationally during Ramadan and the special status of al-Quds (Jerusalem) as the place where, in normal years, tens of thousands of Muslims come to pray at al-Aqsa.

The site was was the right innovation at the right time. Lockdown led to the shuttering of mosques, even Al Aqsa, and a prohibition against families and communities gathering for iftar, the break-the-fast evening meal. There was an acute need to fill the spiritual and social vacuum left by social distancing, a replacement for religious worship and lively nightlife common during Ramadan, said Ruty Rubinshtein, the project’s co-director who heads cultural programs at the National Library.

Many organizations stepped in to fill the void of a stay-at-home Ramadan and would not have organized these activities in normal times, explained Ukeles.

In the Before-Corona era, “Ramadan Nights from Jerusalem” was envisioned as a coalition of cultural institutions and grassroots organizations sharing a calendar of their scheduled live Ramadan events. “At the National Library, we’ve been hosting Ramadan programs since 2014, understanding that it’s an accessible entry point to talk about Islam,” explained Rubinshtein. Other cultural institutions in Jerusalem had also developed Ramadan programming in recent years. “Our idea was to connect all the disparate efforts in order to amplify our collective work.”

But when the pandemic propelled everyone to shutter their doors, Ukeles and Rubinshtein decided to embrace the limits of lockdown and transition to digital. And what they lost in face-to-face was gained in geographical freedom. “Suddenly we could contact program participants from Indonesia to Morocco and the US, opening an authentic international conversation,” said Ukeles.

Interestingly, going digital also catalyzed the creation of more content. Cultural enthusiasts rallied to convert their museum exhibitions, performances and educational content into a digital format. “It even felt a bit like a miracle that so many partners were able to rally and send quality programs during this difficult time,” marveled Ukeles.

For the Israel Museum, it has spurred them to double down and broaden their reach and appeal to Arabic-speakers, said Eldad Shaltiel, acting chief curator of the Israel Museum’s Youth Wing for Art Education. The Israel Museum produced for the website a film called “Ramadan Nights: The Symbol of the Palm Tree” in Arabic, Hebrew and English. Underlying all of this is a message of empowerment, affirmed Nadim Sheiban, general director of the Museum of Islamic Art, who has worked on Jewish-Arab coexistence for forty years. The Museum produced four lectures and a virtual tour of collection highlights. “Although Muslims make up 20% of the population, their religion is basically ignored. Think about how many times they eat matza and celebrate Jewish holidays. An exhibit like this, and the vision behind it, make Muslims feel equal.”

The shift to digital events lowered the barrier to entry for both East and West Jerusalem. That is significant because residents living on each side of the city tend to not cross the geographic and psychic divide to the other. Most Israeli Jews don’t feel comfortable to go to East Jerusalem, unsure if they’ll be welcome, explained Ukeles. Many Palestinians don’t go to West Jerusalem out of concerns of being unwelcome and unsafe. It is also a matter of political identity. “Most Jews aren’t even aware of the degree with which East Jerusalemites don’t see themselves as part of the same city,” noted Ukeles.

Ahmad al-Sayed, coordinator of museum guiding and educational programming for the Arab population at the Israel Museum, agreed. The majority of East Jerusalem residents do not accept Israeli institutions, including cultural ones. “East Jerusalem comprises many communities with different identities, but for many there is sensitivity around going to something that’s Israeli. In my opinion, that sensitivity stems from people’s feelings that there are hidden political agendas on the part of some Israeli institutions.”

For Muslims, Ramadan—the month in which the Qur’an was first revealed to the Prophet Muhammed—serves a time of reflection. With the festival of Eid al-Fitr beginning on Saturday, May 23rd, or Sunday May 24th, it’s coming to a close. Butthe website will stay up with access to on demand programs, and the organizers are already planning for next year.

“In the Israeli school system, we weren’t taught to speak Arabic or anything about Muslim holidays,” she said. “Why can’t we be like New York, where Chanukah holds a respected place on the American calendar? Ramadan ought to hold its proper place on the Israeli national calendar and mindset.”

Ruth Ebenstein is an American-Israeli journalist, historian, public speaker and peace activist. She is penning a memoir, Bosom Buddies: How Breast Cancer Fostered an Unexpected Friendship Across the Israeli-Palestinian Divide.