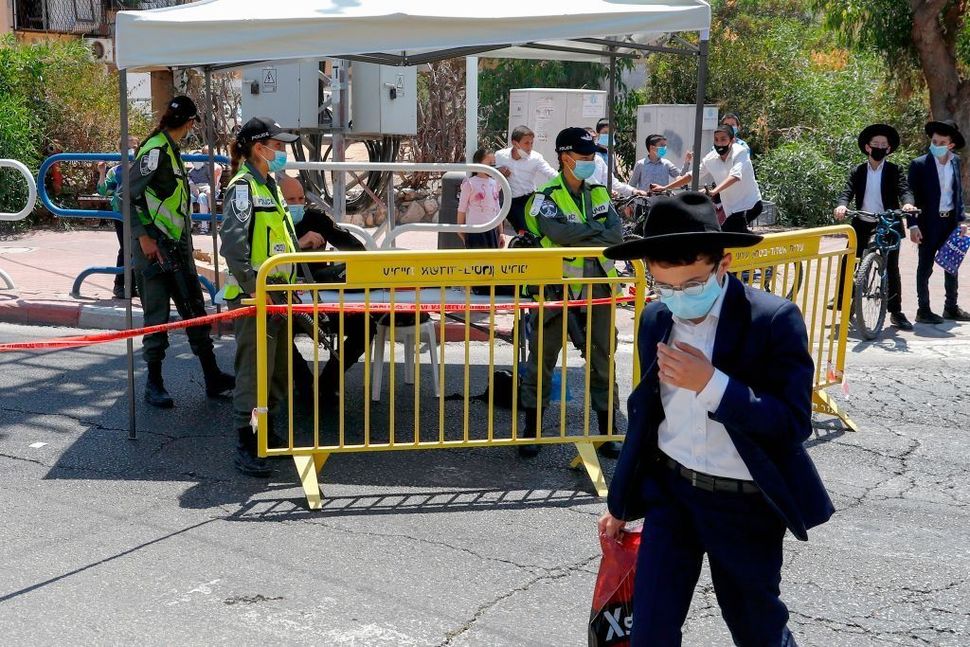 Israeli security forces, wearing protective masks due to the COVID-19 pandemic, control access to a neighbourhood that has been isolated following a recent increase in coronavirus cases in the southern coastal city of Ashdod, on July 2, 2020. Image by JACK GUEZ/AFP via Getty Images

A 27-year-old Pilates instructor was walking home from the beach in Jaffa on Saturday afternoon when she got an alarming text message. According to “an epidemiological investigation,” it said, she had been in contact with a Covid-positive person on the previous Saturday between 4 and 5 p,m., and now was “obligated to go into isolation immediately”.

The instructor, who spoke on the condition she be identified only by her first name, Sapir, is one of some 30,000 Israelis who received such alerts last weekend — and one of many who contacted the health ministry to contest the order.

As Israel, like many parts of the United States, struggles to contain a new, record-breaking surge of coronavirus cases, its Parliament last Wednesday passed a new law temporarily legalizing its most controversial tools: conducting mass surveillance of its own people through their cell phones.

The new law has sparked a new round of condemnations of the practice – which prior to this pandemic was reserved for combatting terrorism – as reckless and anti-democratic. .

“They are doing crazy things, without thinking of the consequences,” Sapir said in an interview. “I had not realized a law had even passed authorizing this. It’s crazy. How is this OK?”

At first Sapir, who is studying to take qualifying exams to enter medical school, said she did not know if the message she received was real or a joke. On the appointed day and time, she said, she had been on the beach with two friends and then riding her bicycle home. Neither of the friends received an order to isolate, and any contact during the bike ride, she reasoned, would be shorter than the 15 minutes the government says constitutes a possible exposure.

After receiving the text, Sapir said, she spent four hours Saturday trying to get someone on the phone at the health ministry to clarify her situation, but with no luck.

“How can you tell me when I was next to someone with corona, but you can’t tell me where,” she complained. “You are following my cell phone, but you don’t have that information?

“Nothing is clear,” she added. “I want to say: Get your act together!”

The new law authorizes the Shin Bet, Israel’s internal-security service, to tap phone data for three weeks. The government first activated the Shin Bet to do this via emergency order when the coronavirus outbreak first hit in March. (Israel had had the technology for years but only used it to track the movements of terror suspects, mainly in the occupied West Bank and Gaza Strip.)

Privacy advocates have from the beginning described the shift in use as a Draconian move that does more public harm than good and violates the civil rights of citizens. 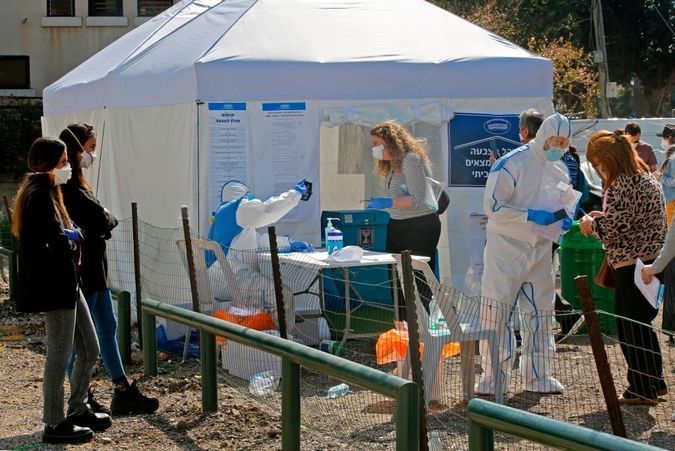 The Supreme Court ruled at the end of April that the phone-tracking had to stop unless a law was passed authorizing it. That’s how it emerged as a bill in wake of the new spike of infections — there are currently more than 10,000 active cases for the first time, almost twice as many as during the original outbreak in late March.

Israel originally won plaudits from around the world for its swift, aggressive response to the initial outbreak. A lockdown was implemented with stringent rules – for weeks Israelis were not permitted to roam more than a block from their homes, except to buy provisions. But after two months, the economy was reopened in a rushed and arguably sloppy way with plans for a more methodical, data-based reentry quickly scrapped and is now experiencing a surge. Public gatherings, for example, where in the case of weddings up to 250 people were permitted to gather, are reportedly part of the reason the virus was able to spread.

According to an analysis by the Financial Times, Israel’s outbreak is growing faster per capita, than the United States.

8) This is Israel’s epidemic today. It’s growing faster per capita than even the US. pic.twitter.com/rKZvpzkcFT

Prime Minister Benjamin Netanyahu warned that the country is in a state of emergency and his government imposed a series of new restrictions on Monday, limiting restaurants to 20 people inside, 30 diners outside, and houses of worship to 19 people, closing wedding halls, bars, gyms, pools and some summer camps.

In the neighboring West Bank, the Palestinian Authority is enforcing a new lockdown. (On Tuesday the government passed a bill enabling coronavirus-related decisions to go into immediate effect without consultation or vote in the Knesset. Critics saw this as further evidence that Netanyahu is using the crisis as a way to undermine democratic norms). 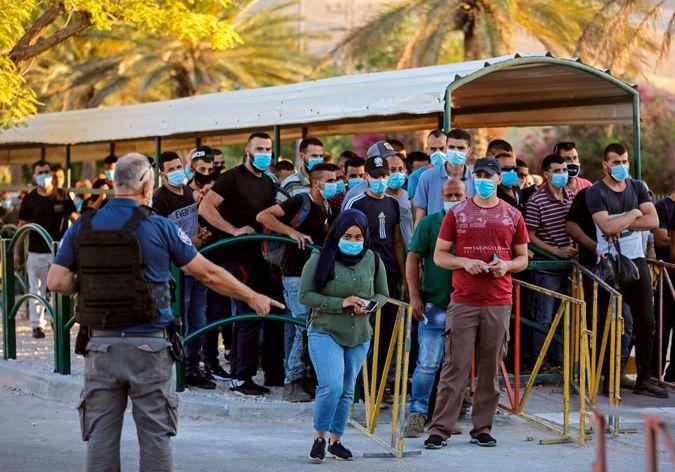 Palestinian workers wearing masks against Covid-19 lineup for a security check at the entrance to Israel’s Mishor Adumim industrial zone nearby the Maale Adumim settlement in the West Bank east of Jerusalem, on July 1, 2020. Image by MENAHEM KAHANA/AFP via Getty Images

Opponents of the cell-phone surveillance point to an alternative, a voluntary app called The Shield that was created by the health ministry in consultation with privacy experts and uses open-source data.

Others see the program as an innovative, potentially life-saving tool, and worth the privacy compromises if only implemented on a temporary basis and with close Parliamentary oversight.

The Association for Civil Rights in Israel, or ACRI, said it will again appeal to the Supreme Court as it did after tracking was first introduced in March, as an emergency regulation. This time the group’s goal will be the repeal of the new law.

“No other democratic country has put its secret security services to use in the fight against COVID-19, in fact, the opposite is true,” said Maya Fried, international spokesperson for ACRI. “Many countries are employing voluntary technology alternatives during this crisis, and we call for similar civilian alternative contact tracing measures.”.

Fried noted the wave of complaints from citizens like Sapir who say that they were not where the system placed them during the time noted in the tracking of their movements.

“With this fundamentally unconstitutional move, the government demonstrates how easily it can be tempted to use extreme mass surveillance tools, developed originally and solely to combat terrorism, in an entirely civilian matter and for an extended period of time,”she said. “This is a genie-in-a-bottle situation – it won’t be easy, if at all possible, to put the genie back in the bottle.”

Michael Bar-Sinai, a computer-science researcher at Ben Gurion University and a fellow at Harvard University’s Institute For Quantitative Social Science, also sees potentially dark consequences of employing Shin Bet to track its own citizens. He noted in an interview that the Shin Bet itself objected to being drafted for the cause.

As faults in the technology are laid bare in the apparent errors being made for COVID tracing, Bar-Sinai said, it could compromise Shin Bet’s use of the system in terror operations.

“The fact is that this conditions people to be surveilled fulltime by a secret organization can have a chilling effect on political activity,” said Bar Sinai. “If it was just about pandemic control and creating data for pandemic research and tracking and getting a quick turnaround on testing than these are known things, the data is out there. But that’s not what it’s about it – it’s about using COVID to be a more authoritarian, totalitarian country.”

On Monday, the left-leaning Haaretz newspaper published an editorial calling for an end to the tracking, arguing the practice shows Israel in “all its civic nakedness,” and that “ the coronavirus is a civilian crisis and the Shin Bet should be left out of it.”

In response to growing public criticism, the Cabinet decided Monday to create a panel of six ministers, including Netanyahu, to look into concerns about the tracking program.

Meanwhile, Shir Mizrahi, 28, a sixth-grade teacher, is at home self-isolating after getting a text from the government. In her case, she was swapping parking spaces with a fellow teacher who was later diagnosed with the virus. Their total interaction was three minutes, Mizrahi said, adding that they stood at a distance and did not exchange a single word.

She is bothered by the inconvenience, which has prevented her from going to work this week at summer school, more than the the idea that the government knows her every move. Maybe,” she offered, “because I have nothing to hide. As for Sapir , she just got a second notice to self-isolate. This time she says the technology again got things wrong. She was, she said, “definitely at home alone.”

Dina Kraft is a journalist based in Tel Aviv.